Want to hear what DailyFX's London-based analysts expect from the Pound and Brexit moving forward? Join their special webinar on the topic at 12:00 GMT.

Another Stumble in a Brexit That Can't Find its Legs

The United Kingdom's (UK) divorce from the European Union (EU) - otherwise known as the Brexit - seems to fail at making critical progress at every turn. This past session was no different. The market had sucked in its collective breath the late-day Parliamentary vote on Prime Minister Theresa May's proposal to withdrawal. You may recall that she withdrew a plan a number of weeks ago as it was clear heading into the session that the vote would result in a sound defeat. It seems the additional wait didn't change the ultimate result. The odds afforded by the betting market and political commentators already had a favorable outcome at a very low probability. After it was reported that three of the amendment votes planned before the ultimate 'meaningful vote' were pulled, it became clear that MPs were not concerned that more maneuvering was necessary. The vote came down a decisive 202 'yays' and 432 'nays' - the worst margin of loss for a Prime Minister on record. It came as little surprise that after such a sound defeat, opposition party leader Jeremy Corbyn would table a motion of no-confidence in the government - you'll perhaps remember that May herself survived a confidence vote recently and therefore cannot be directly targeted for a year. At first blush, there is little in this outcome to soothe the Sterling and investors on the fence over the investment into the Kingdom. And yet, the Pound charged higher immediately after the vote. Why is that?

Chart of GBPUSD and the CBOE’s Pound Volatility Index 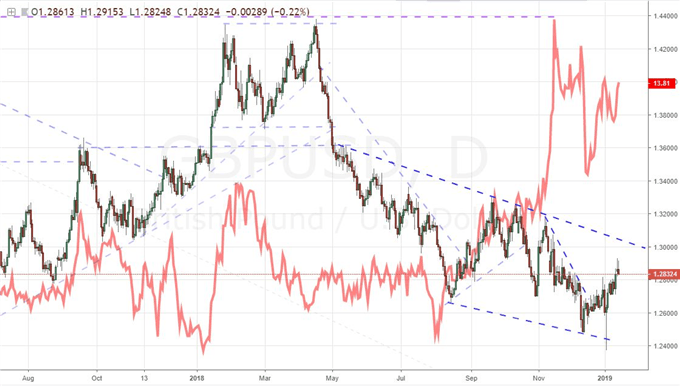 A Rally Is Not What You'd Expect, at First Blush

Before we delve into why the Pound may have responded the way it did, we need to appreciate what the theoretical 'textbook' response to this outcome would have been. On the face of it, the rejection of the Prime Minister's proposal means that we are in for a longer bout of uncertainty as to how this divorce will end, the clock to the March 29 Article 50 exit date ticks down to 72 days and further options to navigate this course have been taken off the table. Overall, this would be construed as 'bad' and we would expect the Sterling the drop. Instead, the currency charged after the results were made clear. In fact, an equally-weighted index saw the Pound rally 0.95 percent in the hour that the tally was released - the biggest charge for the currency over that time frame dating back to September 14, 2017. That is not an 'interpretable' outcome. It was a clear rally. And so, why? There are a number of probable contributing to this drive that roused at least a portion of the market's response each. The most technical-oriented explanation is that the Pound had steadily dropped leading up to the actual vote. This put it at a short-term 'discount' that could be exploited. More on the fundamental side, a frank assessment of where the markets stand after the rejection; we are left with no material change aside from one less day and an official rejection of terms that were already roundly rebuked. That reinforces a natural rebound to the level at which we started the day. Once a sense of situational balance is established, we may sense a strategic effort behind this outcome. May no doubt expected this outcome and she went forward with it anyways. It is likely that she will use this clear statement from Parliament to return to Brussels to state that there is no alternative to further concessions or risk mutual pain (a 'no-deal' Brexit). 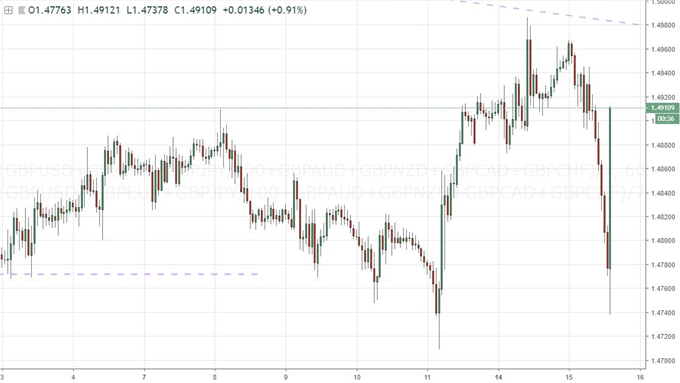 What to Expect from the Pound Moving Forward

If we accept the most strategic reading from this scenario, then the stakes and tension are as high as they have been at any other point of this process. May will need to convince the EU that 'no deal' is a possibility if they don't acquiesce to pleas of further support even though Parliament has taken steps to lower the risk of that outcome significantly. Furthermore, Parliament would still need to be open to a 'soft Brexit' that finds solutions to just a few, key aspects of this stalemate. It is a lot to assume. However, we have more time to fret the possibilities. The vote of confidence is due later today around 19:00 GMT and the PM supposedly has days - rather than weeks - to come back with a 'Plan B'. And of course, we have less than three months until the proverbial cliff comes up. That will keep the Pound exposed to high volatility but serially uncommitted to direction. To take a view bullish or bearish runs the risk of an 'accident' in the opposite direction but more practically, it will likely lack for any meaningful momentum. Yet, when all the static clears; the probabilities are decidedly clear. The chance of a 'no deal' is very low, a second referendum is moderately higher, an extension of the Article 50 time frame higher still. A compromise perhaps still leads the pack. Considering this, the Pound still trades very low in historical terms, but timing is critical in trading. We focus on the Brexit scenarios in today's Quick Take video. 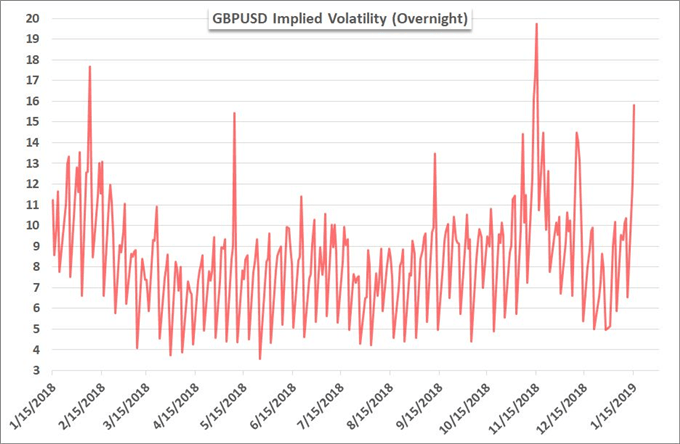