See Q1’19 forecasts for the US Dollar, Euro, British Pound and more with the DailyFX Trading Guides

UK Prime Minister Theresa May's bill was downed in a historic fashion today, losing 432-202, a 230-vote margn. This was the worst-ever defeat for a sitting government, eclipsing the 1924 defeat Ramsay Macdonald suffered by 166-votes. After sliding all day, the British Pound has started to reverse its losses as the dust settles.

Now that the vote has failed in parliament, the opposition Labour party will bring forward a no-confidence vote on Wednesday, January 16. According to the PM's spokesman, the confidence debate will begin at 8 EST/13 GMT. But in the wake of the historic vote, the Northern Ireland DUP party – the Tory party’s coalition partner – has already said that it will back May's Tory government. It would appear that neither DUP nor Tories want another election.

That UK PM May is staying on and looks positioned to win a no-confidence vote brought forward by Labour suggests that a soft Brexit can still be achieved – and May's deal will have to be at the core of the solution. Assuming a no-confidence vote is overcome, May has pledged to reach across the aisle to find more common ground in order to wrangle the votes for her deal to pass. Ultimately, we should expect May back on a plane to Brussels in near-future for more concessions from the EU. 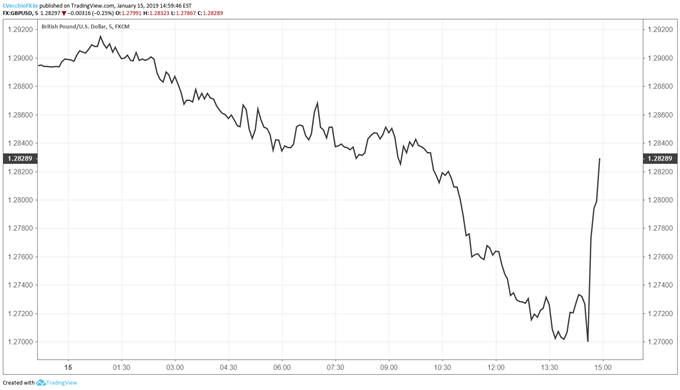 Following the Brexit vote result, the British Pound initially touched fresh intraday lows at 1.2669 versus the US Dollar. But amid UK PM May saying that she would stand – and weather – a no-confidence vote, markets seem to be unwinding earlier bets (fears) that a ‘hard Brexit’ (no deal) scenario would result. As we head into the final hours of the trading day on Tuesday, bullish reversal hammer candlestick patterns were prevalent in GBP/CHF, GBP/JPY, and GBP/USD, while EUR/GBP was seeing a bearish reversal shooting star develop. At the time this report was written, GBP/USD was trading at 1.2829.