The GBPUSD leapt on news that British Prime Minister Theresa May’s Brexit deal was defeated in the UK House of Commons by a landslide, losing 432-202. While the outcome of the vote was largely anticipated, the magnitude of the PM’s defeat is quite shocking and brings into question what will happen next over Brexit instilling further uncertainty. 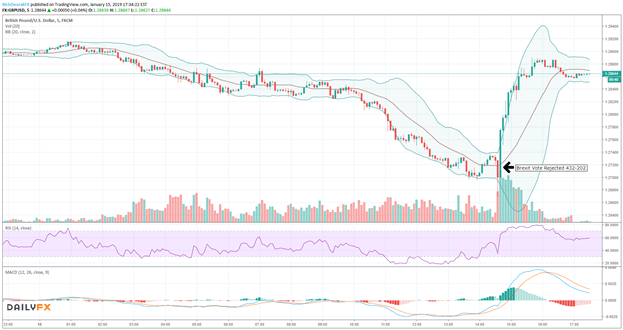 British politicians are now calling for a no confidence vote in the government which will be debated and voted on tomorrow. Despite the huge historical event, currency markets seem to have lost interest in the Pound judging by volatility measures. 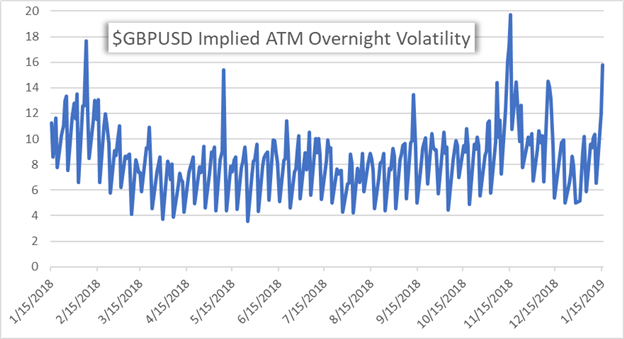 Overnight at the money implied volatility on the GBPUSD currency pair failed to eclipse levels reached previously in the year. Although short term volatility is relatively elevated, it remains at a level lower than one might suspect given the circumstances. 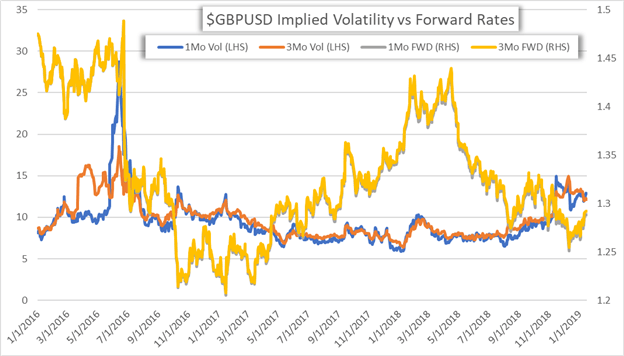 Looking further back, 1 month and 3 month implied volatility skyrocketed prior to the June 23, 2016 referendum vote when the British first voted to separate from the European Union. This is also clearly seen on the Cboe/CME FX British Pound Volatility Index (Ticker BPVIX). Seeing that elevated levels of volatility are typical during times of increased risk and uncertainty, the move in volatility prior to the referendum vote was not surprising.Fast forward to the present, implied volatility on the 1 month and 3 month GBPUSD forward contracts now rests at levels half of where it was prior to the referendum.

Candidly, there is still great uncertainty surrounding the final outcome of Brexit. With British Parliament voting down a potential soft-Brexit deal that PM May brokered with the EU today, it seems that there are three possible outcomes for Brexit: the UK could attempt to negotiate further concessions from European leaders and reach a better deal, hold a second referendum vote where the UK remains in the EU, or crash out of the EU with no deal at all.

Despite forex markets not pricing in much immediate fear into derivative contracts, volatility could return quickly as the March 29 Brexit deadline grows closer. While suppressed volatility in the short term shows Sterling traders have shifted their attention elsewhere, large moves in 1 month and 3 month implied volatility could reappear in the currency pair and provide an indication of where the GBPUSD is headed over the medium term.

Read Up More on Brexit and the GBP: