With the nascent rebound in NZDUSD, how have retail traders positioned in the pair and do they signal a quick stall or continued run? See how retail traders are positioning in this pair alongside the FX majors, indices, gold and oil intraday using the DailyFX speculative positioning data on the sentiment page.

The Kiwi Dollar is Climbing Despite a Troubled Backdrop

The New Zealand Dollar has earned ever bit of its slide since early 2015. The turning point for the currency at that point was an abrupt and clearly unexpected change in the Reserve Bank of New Zealand's (RBNZ) monetary policy course. Up until April of that year, the group had put in for a few rate hikes and had committed to raise its benchmark rate another eight times over the span of just over two years. That would have been an unprecedented pace for any major central bank at the time and certainly exuded a level of conviction that the Federal Reserve wasn't even contemplating at the time (having only put in for their first hike in December of that year). Yet, in a quick about-face, changed from unmistakable hawk to unremarkable dove with a single policy gathering. The recognition of fading inflation and certain domestic concerns subsequently led to a steep decline of nearly 19 percent peak-to-trough in as little as 18 weeks. Since then, the currency has floundered. Yet, more recently, the latest bearish phase seems to have turned in favor of the Kiwi and despite fundamental conditions that continue to lean out of favor the carry currency. Just this morning, NZDUSD charged over 60 pips higher in minutes with the release of favorable employment statistics. That extended a remarkably strong week-long climb. Have circumstances permanently shifted in favor of this troubled currency?

Just because a currency or asset has an unfavorable outlook doesn't mean that it will continue to lose value indefinitely. Eventually, there is a point of equilibrium or fair value where much or all of the depreciation that is expected has taken place. In most cases, there will be buyers for most markets if the price is cheap enough. The question is how cheap the New Zealand Dollar is and what the fundamental calibration is behind its current valuation mix. There is little doubt that the RBNZ is looking at a disadvantage in the monetary policy spectrum. Forecasts through the end of 2019 show there is little hope of even a first rate hike from the monetary policy group which is remarkable given the currency's typical status as a favorite carry vehicle. Now supplanted by the world's most liquid currency by its inferior yield, there is a serious existential question about the appeal of the Kiwi asked far more frequently. Though there is little-to-know anticipation of a hike in the foreseeable future for the New Zealand Dollar that may not earn the currency any further retreat from here. If the central bank decides at its rate decision tomorrow that it will hold course with its record low benchmark rate and keep open the potential for a possible future cut should conditions warrant, the outlook will remain essentially unchanged. However, if there is any opening in the probability of a rate hike - even one further out - the Kiwi could find serious level in the sentiment. This is the speculative bias that has led to more than few key surprises over the past months. 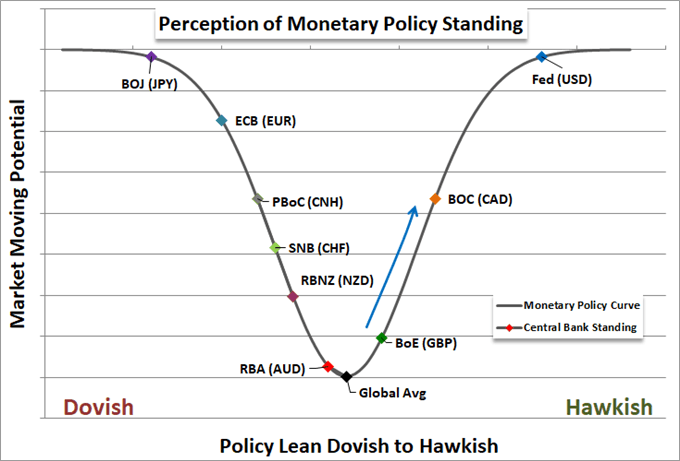 Before we move on to base case scenario and the most promising alternative it is worth considering the options should the unexpected occur. If the RBNZ manages to further drop the low bar on monetary policy views for New Zealand, there are few Kiwi positions that stand to draw a clear benefit with viable opportunities attached. AUDNZD and NZDCAD are perhaps among the few that can offer reasonable offset to what advantages the New Zealand currency carries. The Australian and Canadian Dollars are commodity sensitive, have exposure to dominant trade partners (China and the US respective) and are carry-leaning with actual potential for tightening. Considering the New Zealand Dollar has gained traction against these pairings as well, there is premium to retrace should the motivation arise. In terms of the status quo outcome, a modest bullish drive can leverage the trouble the US Dollar faces given a strong hawkish bias that has in turn fallen short of promoting bullish progress some time ago. In addition to NZDUSD, EURNZD and NZDCHF pit the currency against counterparts that are facing their own existential threats. We focus on the New Zealand Dollar, its fundamental skew and counterparts that can maximize its own fundamental strengths and weaknesses in today's Quick Take Video.