The Dow Jones is recovering but should soon have the bounce in test mode as resistance levels lie at current levels and higher. The DAX 30 is also nearing its own test of resistance and remains a general laggard. Crude oil has strung together several positive days since hitting support, but like the indices it also faces resistance. Gold is holding with a generally weak Dollar, looking to slope support to keep it held in place for another push higher.

New Quarterly Forecasts are out, check them out along with other helpful resources on the DailyFX Trading Guides page.

Dow Jones and DAX 30 at or near resistance levels

The Dow Jones has undergone a sizable recovery but that could soon be put to the test with resistance levels in the neighborhood. There is a channel off the December low which traders can use to lean on as further guidance. Shorts look likely to gain the upper hand soon but keep an eye out on the lower parallel as support to keep the Dow pointed higher despite resistance. A break below the lower channel threshold will have a deeper decline in focus.

The DAX recovery is also about to face resistance via both horizontal levels running back to the October low as well as trend-line resistance from September. A turn down off the area just above will put the ball back into the seller’s court.

Stocks recovering, crude oil recovering. And like stock indices, oil also has resistance it is testing from November/December. Price is trying to push above the first area just over 50 now but could quickly fail. If momentum can carry it higher, then the top of the small Nov/Dec consolidation (53.25/54.50) could be the next stop. Overall, new long positions don’t hold much appeal here, while shorts may want to wait and see one of these levels hold in place as resistance before becoming aggressive.

Gold has slope and Dollar support to lean on for now

Gold has been tilted higher with the help of the Dollar (and risk-off) and may continue to receive support from the former. Looking to support in gold on its own, the top-side of the multi-month channel clocks in as the first good level of support to watch. If it can hold and provide some kick for gold, then the 1305/10-area may soon be targeted. 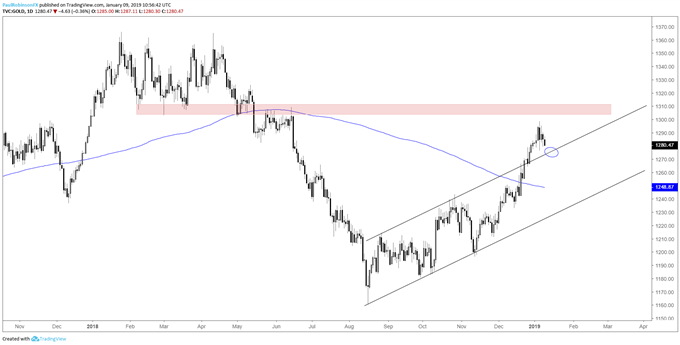 Whether you are a new or an experienced trader, DailyFX has several resources available to help you; indicator for tracking trader sentiment, quarterly trading forecasts, analytical and educational webinars held daily, and trading guides to help you improve trading performance. We also have a series of guides for those looking to trade specific markets, such as the S&P 500, Dow, DAX, gold, silver, crude oil, and copper.