Are you trading the Pound or keeping track of monetary policy's influence on broader sentiment trends? If so, join Nick Cawley for live coverage of the BoE rate decision starting 15 minutes before the official announcement. Sign up on the DailyFX Webinar Calendar

The Contrast Between the BoE and Fed Decisions

This past session's US Federal Reserve rate decision proved a dud for the US dollar. The forthcoming Bank of England (BoE) rate decision is positioned to deliver the exact opposite outcome as its peer. At its afternoon meeting Wednesday, the US central bank held its benchmark lending rate range unchanged. The yield the Fed Funds rate offers is unrivaled among its largest peers (1.75 to 2.00 percent), but the market-moving potential of its regular gatherings has been significantly curbed by a remarkably transparent policy group. Forward guidance is just as much a tool and tactic for the Fed as actual interest rate hikes have been. And, in this effort, they have proven remarkably effective. Just as the June rate hike found the market virtually certain of the tightening move, this most recent summit's hold was assumed to be virtually assured with swaps and Fed Fund futures assuming a greater than 98 percent probability for that exact outcome. Looking forward, there are still two further rate hikes due in 2018 alone, which is generally unprecedented; but the market's speculative nature has effectively priced in this robust forecast and discounted the subsequent bullish implications. For the Monetary Policy Committee (MPC), the certainty settings are set materially lower; but there is still a remarkable level of confidence that the BoE will hike at this gathering.

According to overnight swaps, the probability that the BoE will hike rates another 25 basis points to 0.75 percent is over 90 percent. That is very close to certainty. It is easy to write off this move when the Fed sets such an unrealistic baseline for the market. Yet, remove the US group from the equation, and the UK authority's hike would be remarkable. Few other central banks are even ruminating on a move to tighten policy, so the mere anticipation of an eventual hike stands out. The proximity and conviction are nothing short of exceptional. That said, as confident as the market is in a hike at this month's meeting, the outlook for subsequent moves beyond August is anemic. In this open forecast, there is plenty of room for speculation to be 'impressed' or 'disappointed'. That can generate a speculative surprise for the Sterling and UK assets beyond the 'in-line' outcome of this particular call. And, we will be ensured at least some degree of speculative insight as the BoE is due to release its Quarterly Inflation Report alongside Governor Carney's assessment. If this were the only fundamental consideration on the radar, we would be setting up for a potentially remarkable move for the Pound. That said, there is a distracting theme that carries far too much influence and invites entirely too much uncertainty that will readily drain the market impact of the rate decision: Brexit. Given the financial and economic fallout that can result from a 'no deal' divorce, it is understandable that the market is less interested in simply running on the update from the BoE. 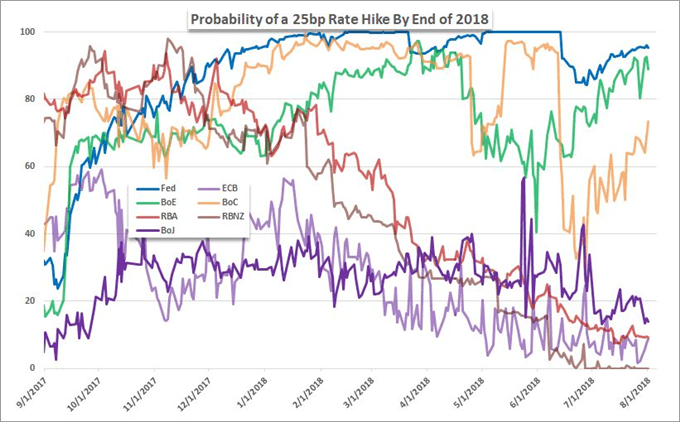 The Practical Trading Strategy for a High Probability Outcome

How to trade around and through the Bank of England decision? Let's consider the situation from the perspective of an extreme scenario. If the BoE were to confirm it were increasing rates to 0.75 percent and use its Quarterly report to direct speculation to anticipate a few more moves to tighten the policy reins over the coming year, this would be a remarkably 'hawkish' outcome. Such a development is certainly not priced into the Pound, much less the assets of the UK capital markets. This could generate a significant short-term volatility (bullish) for the GBP, but follow through would be another matter entirely. The quick adjustment would certainly need to be made in the currency's loosely assumed fair value. Yet, the practicality of the Pound carrying forward owing to spaced out hikes on an extremely low overnight yield does little to soothe the concern and uncertainty in Brexit. The UK's divorce from the EU is a messy, open-ended and lumbering fundamental threat. It halts any sign of conviction - bullish or bearish - in its tracks. This is a high probability curb on price action, but we can adapt trading strategy around this knowledge. If we find a sharp volatility outcome is the first response, short-term technical breaks can like that from the GBPUSD, GBPCAD and GBPNZD can be exploited as they are on the cusp of technical spark but the larger picture offer reasonable targets in slightly wider range conditions that would step in soon after the flush drains away. Another approach would be looking for options to fade as they reached meaningful technical barriers with little chance of clearing the boundaries. EURGBP is a clear example of this scenario, but GBPNZD can also present opportunity in this second scenario to be an ambidextrous option. We focus on how market conditions and trading approach can better adapt for an expected high-profile event risk like the BoE rate decision in today's Quick Take Video.