The video above is a recording of a US Opening Bell webinar from April 30, 2018.

For several weeks, we have been arguing that the range in EURUSD may break to the downside. It appears the three-year bullish pattern in EURUSD ended in February 2018 and that the next several months may lead to downward trade.

Carrying a small short position into last week, a big development occurred when EURUSD sentiment closed positive for the first time since April 2017, which is a bearish signal. Therefore, we were waiting to add to the position with a break lower at 1.2153 that triggered on April 26.

It is possible a bounce may develop back to 1.2180-1.2280, but the trend is now firmly planted lower. We look to ride the trend to lower levels possibly as far as 1.12. Bearish patterns remain while the EURUSD chart remains below 1.2414. 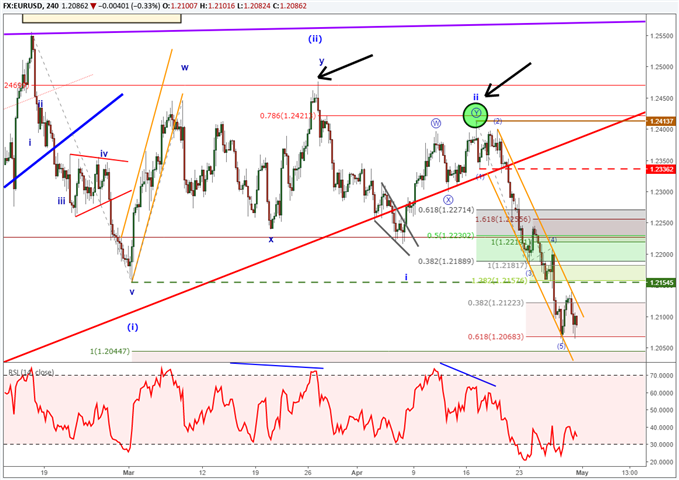 EURUSD sentiment continues to hover near parity as it oscillates back and forth between -1.1 and +1.1. A material move above +1.1 would be a bearish signal and hint at further losses for EURUSD.

Notice the orange trend channel on the EURUSD chart above. A move above the trend channel would be normal at this point and nothing to be alarmed about. Strong trends need to consolidate from time to time. Keep an eye on 1.2180-1.2280 for resistance should the orange channel break. To the downside, we are not anticipating any strong rebound until a visit near 1.17. Of course, the Elliott Wave pattern may evolve into something else, but for the time being we are looking towards lower levels.

USDJPY has started a new trend on March 25 with an impulse wave. According to Elliott Wave Theory, this pattern appears incomplete to the upside and may ultimately test 118. The USDJPY chart is running into some resistance as a 2012 trend line crosses near the current price zone. Our preferred Elliott Wave count is that USDJPY may eventually find the strength to persevere higher. However, if this grey trend line holds and if USDJPY falls below 107.46, we are prepared to adopt a wave count that this may be only wave ‘b’ of (y). 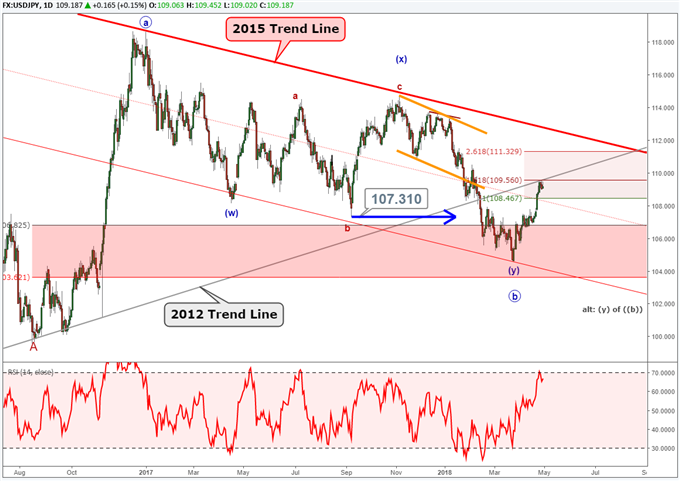