Last Time This Happened in EURUSD was 1 Year Ago

EURUSD sentiment has closed the day positive for the first time since April 2017. This, coupled with our Elliott Wave analysis is a longer-term bearish signal for EURUSD.

In April 2017, EURUSD was trading near 1.06. IG client sentiment then flipped from positive to negative and remained negative until Monday’s daily close as sentiment is currently sitting at +1.05. Sentiment is a contrarian tool so this flip to positive is actually a negative signal for the EURUSD exchange rate. In hindsight, sentiment flipped from positive to negative in April 2017 and we say EURUSD rally over 1500 pips. Will this flip in sentiment create a similar bearish trend? Time will tell. This flip does not mean that we blindly go out and sell EURUSD, but it does indicate the EURUSD trend may be shifting.

Our bias for EURUSD has been bearish for a couple of months now with a small probe in the market according to our April 9 Elliott Wave analysis.

“If a trader is unwilling to wait for a more conservative entry at the 1.2153 break out level, then they could consider a short entry in the 1.2330-1.2380 price zone. If entered in this upper price zone, it may be best to probe the market with a small trade entry rather than risking the full trade size. Risk to the near term sell can be placed just above the March 27 high near 1.2480.”

The Elliott Wave patterns that we were watching at that time showed bearish impulse waves followed by corrective waves. This is an overall bearish pattern and is the reason we established a medium term bearish bias.

The Elliott Wave Chart for EUR/USD

According to the Elliott Wave principle, it appears EUR/USD may be falling in a third wave that began on March 27. If this wave picture is correct, then we can anticipate EURUSD may fall several hundred pips over the coming weeks to effectively correct the 2017 up trend. 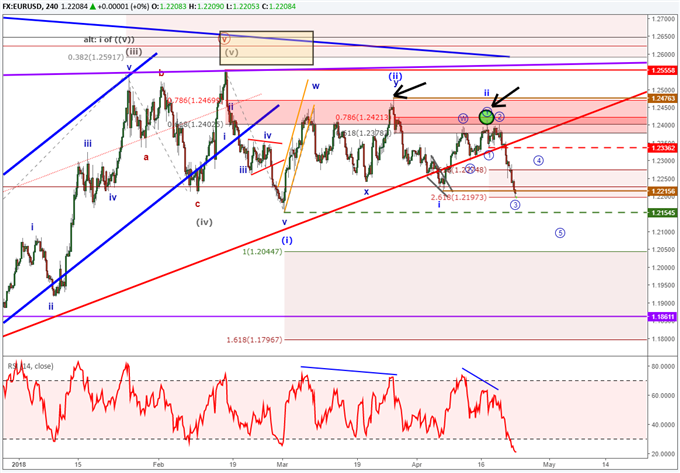 Both second waves sported divergence on the RSI oscillator as they finished carving on March 27 and April 17.

Bottom line, the Elliott Wave picture paints a bearish story just as the sentiment reading does. A brief rally may occur to the 1.2275 area. However, EURUSD chart should remain under 1.2336 for this bearish Elliott Wave scenario to remain the higher probability pattern.

We had a small short entry probed on the market at 1.2350 and another short break out entry waiting on further EURUSD breakdown at 1.2153.

How do you make money trading forex with Elliott Wave Theory?

Elliott Wave Theory is simply a style of analysis with simple rules and guidelines used to identify patterns in the market. Based on the patterns produced by the market, we can identify key levels that if broken would suggest a different pattern is playing out. We then use those key levels to establish risk and target parameters based on the Elliott Wave Theory rules and guidelines.

Communicate with Jeremy and have your shout below by posting your EURUSD chart in the comments area. Feel free to include your Elliott Wave count as well.