Hone Your Focus When Trading the British Pound

Are you trying to untangle the key fundamental drivers for your Pound setups? Are you watching the Bank of England rate decision? Join Christopher Vecchio as he covers the event live. Sign up on the DailyFX Webinar Calendar page.

When there is an abundance of high level fundamental themes and event risk overlapping, the result is not the idealized scenario of high volatility and productive trends that traders typically pine after. Instead, the result is more often difficult trading conditions with erratic activity with productive moves sabotaged before they take true root. Looking across the global docket, many of the most liquid currencies face this oppressive backdrop. For the Dollar, we have passed the FOMC rate decision only to now enter the gravity of US tariff announcements - both on the world (steel and aluminum) and reportedly with China. The Euro in turn is facing the European Union summit and possess the greatest risk as a trigger for global risk aversion should the US deny an exemption to the collective economy. The British Pound is another such currency weighing Brexit, the Bank of England rate decision and its own status with tariffs. Let's focus on the Sterling. 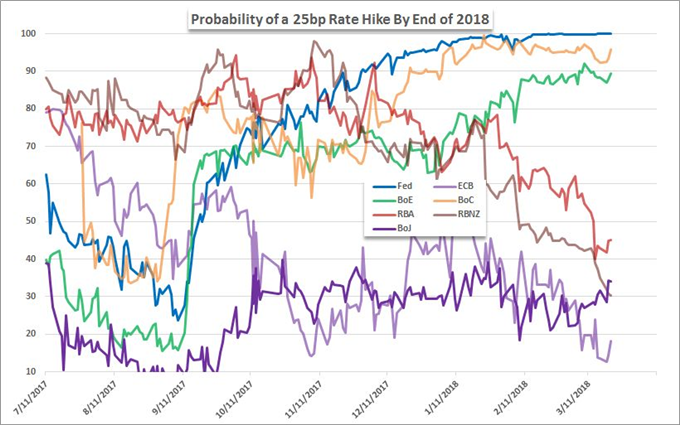 Brexit Is Still Top Priority, Even if it Complicates Markets

Over the next 24 hours alone, there will be a number of fundamental storm fronts converging on the Pound. All discrete data and general themes accounted for, the ever-present Brexit remains the most influential and persistent driver - whether that translates into volatility, a trend or an anchor against cross winds. The ongoing divorce proceedings between the UK and EU is a constant fog over the Sterling. The aftermath of the actual vote in summer 2016 was a persistent dive that found its trough with a flash crash in October. since then, there has been a general drift towards recovery with a more concerted optimism through 2018 specifically. This tail wind seems to reflect a modest optimism that caters to a sense that the currency still has a lingering tinge of 'worst case scenario' that can be safely positioned against. Perhaps in the later months of 2016 or the first half of 2017, that would have been a true observation. At these levels, however, the risks look underpriced as the Pound drifts higher. 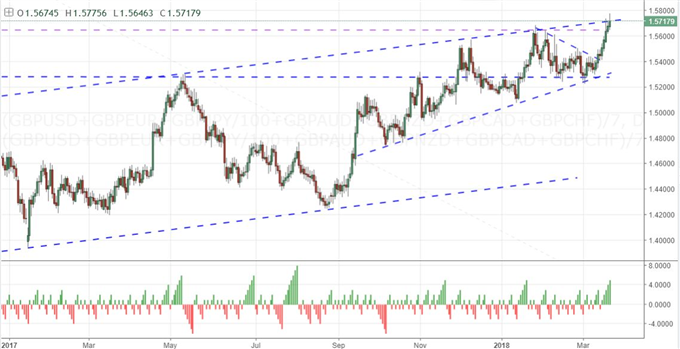 The Implications of the BoE, EU Summit and US Tariffs

There is nothing explicit on the docket that suggests the UK is going to make tangible progress in filling in the missing details of its position on the Brexit. However, many of the significant thrusts for the market on this particular front have come with little forewarning. One event that will weigh on this theme quite heavily - just from the other side of the table - is the EU summit. While the leaders of the 27 remaining members to the Union are due to speak on a number of topics of importance, the Brexit is definitely on the agenda. Another high-profile UK event that will offer concentrated response is the BoE rate decision. This is not expected to end in a change of rates, but there is still a substantial speculation for further tightening this year in the financial markets. This event will be analyzed for implications for timing of the next hike. According to swaps, the probability of a hike from the BoE before end of the year is approximately 89 percent. Only the Fed and BoC are on more hawkish settings, yet what has that earned for the Dollar and Loonie respectively as of late? Another consideration that needs to be monitored closely is the UK's exposure to tariffs. Much of the interest is on the US, China and the EU. The United Kingdom is just as exposed and it will register the effects whether direct or indirect moving forward.

Which Pound Crosses are Complicated and Which Refined

When looking for Sterling pairs to consider for trading against all of this uncertain and potential volatility, it is important to segment. Those pairs that are heavily skewed due to their fundamental backdrop include the GBP/USD and GBP/JPY. The tariffs on the former and risk trends (which can follow trade wars) for the latter present drivers that can overpower Brexit given the correct motivation. A further detriment to these pairs is the lack of actionable technical analysis they represent. EUR/GBP is right in the middle of the Brexit conversation, but the event poses risk to both sides. Further, their is a distinctive range whose lower boundary we are currently testing. GBP/CHF has a meaningful attachment to the divorce owing to the Franc's relationship to the Euro, but the astounding 13-day advance suggests a market that is prime for rebalance. The one-sided drives and subsequent recent pullback from GBP/CAD and GBP/AUD offers a similar case of natural correction owing to a one-sided market. We discuss what to watch when trading the Pound in today's Quick Take Video. 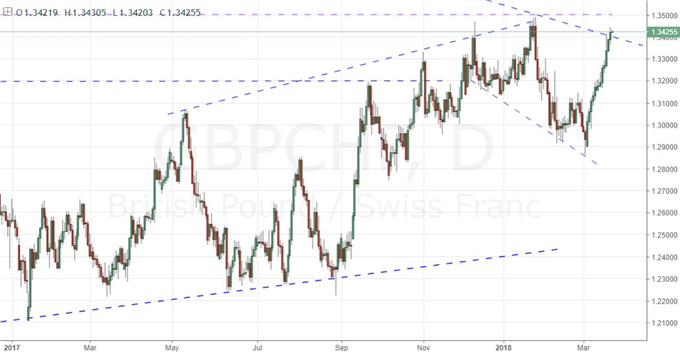 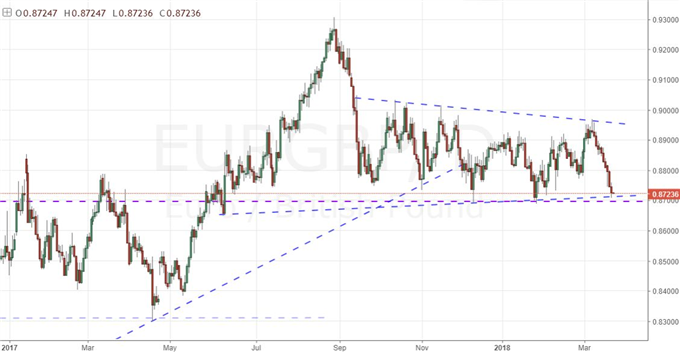