A Few Key Market and Economic Themes for 2019

Though the markets took an unmistakable turn for the worst this past trading week, conditions underlying the financial system have shown strain with bouts of anxiety throughout 2018. The first serious detonation of volatility in February could be designated as a balancing effort. The preceding year's measures of inactivity were unprecedented in a number of ways - such as the number of days the VIX closed below 10. Extreme quiet thereby warranted a charge of extreme volatility. Yet, having reset the speculative setting in the market, we could have just returned to stoic gains just without the same degree of pace or dearth of 1 percent daily moves. Instead, we crashed upon multiple periods of dramatic volatility, until October rolled around. Having set a record high early in the month, the S&P 500 started a productive dive interjected with a few extreme days of selling. Progress on a reliable trend stalled but volatility persisted with strong swings developing on a regular basis. And, then a critical technical break was made Friday, December 14. The S&P 500 and Dow both put in for high profile trendline breaks which carried over to the extreme route suffered just this past week. The more than 7 percent plunge over the five-day period was the biggest since 2011 and put an exclamation point on a high-profile head-and-shoulders pattern that developed throughout 2018. This further brought attention to the fact that other risk-leaning assets have been marking bearish progress rather consistently for much more of the year. This transitional year will set the stage for a fundamental and speculative upheaval in 2019.

Bear Trend Conviction Is Likely to Deepen with Economic Implications

Technically-speaking, the S&P 500 and Dow did not reach technical bear markets on the Friday that closed out the last full-liquidity week of the trading year. That said, the tech-heavy Nasdaq Composite, a host of global indices (like Germany's DAX) and other asset classes (EEM Emerging Market ETF) have hit the dreaded technical milestone. With volatility holding exceptionally high and the litany of fundamental destabilizers circling the global financial market like sharks, it is difficult to push back the dusk on a near-decade of complacent advance. It is therefore far more likely that the sporadic bear market mentality that we've seen so many corners of the market escape will create a deeper impression and direct the status quo. Should the fundamental view of the market rank shift to unwinding excessive risk, there are plenty of assets that have excess premium to shed - though US indices are arguably at the very top of that list. That is risk for many who abide a 'buy and hold' or 'long only' investment credo; but for the flexible, it could a greater opportunity as market declines usually come at an accelerated pace. One important byproduct of financial trouble is the reach it has for economic activity. If there is indeed an ongoing retrenchment in capital market assets which have played such an important role in building up perception of wealth and encouraging investment/spending, the it is more likely that a mild recession begins. The technical definition is two consecutive quarters of contract which is not very far removed from the running assumption among global economic overseers of late. 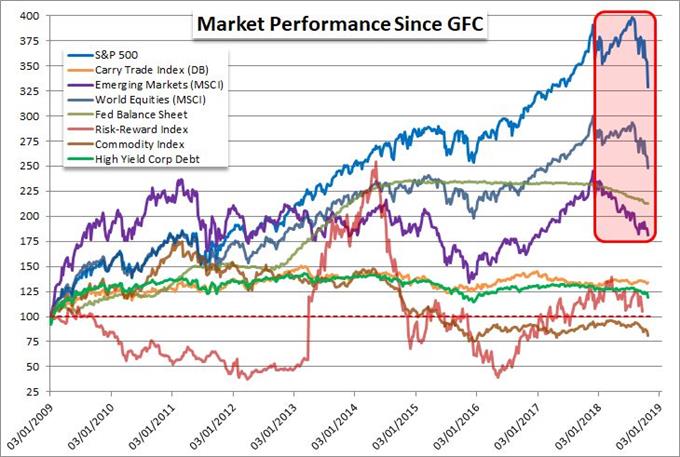 What will Happen with Fed Policy, Brexit Negotiations, Trade Wars and Government Stability?

Though the Federal Reserve has a dual mandate (inflation and employment), another unconfirmed objective for the group is to reduce market volatility. Recognizing the concern the market has expressed following December's tumble, it is likely that the US central bank decides to hold its policy unchanged as growth and inflation slow alongside an erosion of wealth via capital markets. That will materially shift the perceived strength of the Dollar and trajectory of US Treasury rates. Meanwhile political upheaval in the US government is due to Worsen as senior staff from the President's council resigns or is fired and Democrats prepare to take over the House of Representatives. If the past two years was the progress registered under ideal circumstances, the gridlock will do no favors to a ballooning deficit and fading domestic growth track. That political tension would spread through global relations as well. However, where there may be further screw turns in the US-China trade war, it is more likely that the countries veer off this destructive path one way or another - either the Trump administration will relent or China will tip off a financial crisis it cannot contain. Another likely reduction in uncertainty is likely to come on the part of the Brexit fears. It will not be resolved immediately into the year, but it is unlikely that the two sides are interested in causing acute economic pain for their own and neighbor's economies. An extension or second referendum will likely be announced before the March 29 deadline. These are just a few systemic considerations likely to take place over the coming year as volatility puts the markets on an increasingly unstable path. 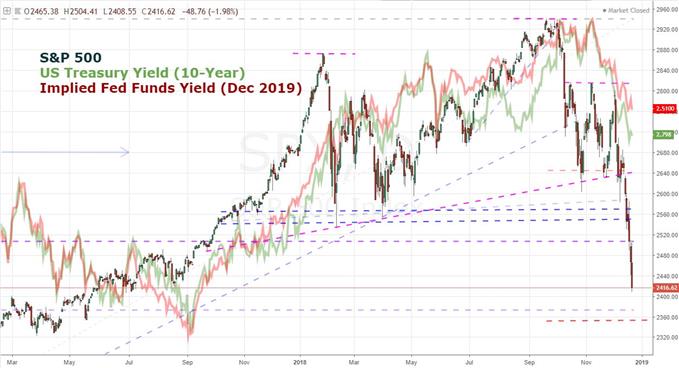