The pressure wave generated in the markets last week from Fed Chairman Jerome Powell’s speech at the Jackson Hole Economic Symposium extended into this new week of trading. On the one hand, the carry over of risk aversion wasn’t much of a surprise given the implicit conviction made by the head of the world’s largest central bank. A downturn in economic activity, labor market conditions nor capital market performance would turn the policy group off its commitment to reign in rampant price growth. In fact, that separation from markets was implied in the speech from its conspicuous absence, but one of the more dovish members of the Federal Reserve made sure to bring this critical component into the fold Monday. In remarks he gave Monday, Minneapolis Fed President Neel Kashkari said he was concerned to see the market rally after the FOMC’s 75bp rate hike and hawkish message after their July 27th meeting. In contrast, he was reportedly “happy” with the reaction to Powell’s speech. Overall, the S&P 500’s performance Monday was distinctly negative, but its -0.7 percent tempo was materially less intense than the -3.4 percent tumble from Friday. The question is whether the range of support levels below (50-day SMA and Fib retracements) can hold back a tide throttled by liquidity. 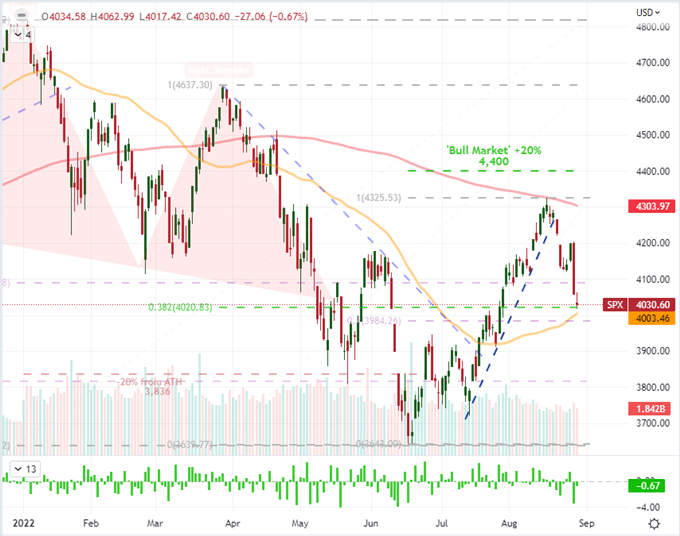 One consideration that is important in my book is to recognize that the slide in risk from Friday into Monday was not just the territory of US indices. Beyond the S&P 500, Dow and Nasdaq 100 – all of which dropped this past session, there was a global equities retreat through Monday. Notably, Japan’s Nikkei 225 drop was significantly sharp than the European DAX 40 and FTSE 100 indices’ drop, but the former didn’t have the opportunity to discount Powell’s remarks. Furthermore, emerging market assets and junk bonds joined the swoon. Exceptions to the current were the advance in commodity prices (led by crude oil) and the uptick in Yen-based carry trades. That doesn’t upend the perspective on market sentiment, but it does suggest that slump was not a dominant driver. 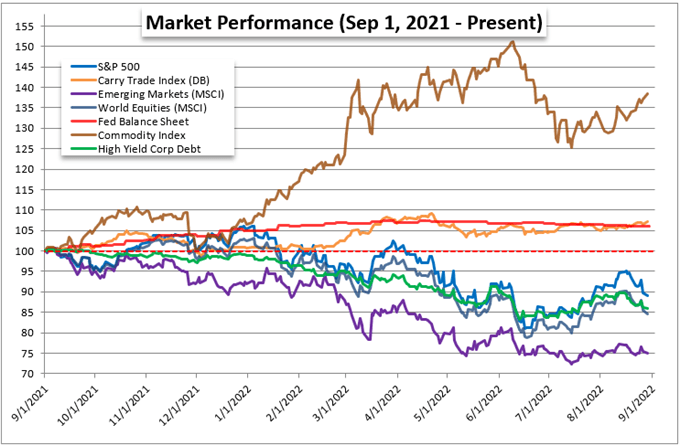 It is Seasonal Averages Versus a Stocked Economic Docket

The equation this week in interpretating the potential of significant market activity is pitting the full extend of seasonal restrictions against a run of very impressive event risk. Recalling the historical norms this time of year, we are passing through the end of August – a month that historically registered the full nadir of monthly participation (volume and open interest). That said, volatility does tend to build this week and through the four weeks that have preceded the 35th cycle of the year, but we have been a little late to that upswing. Thin volume and a busy docket in this light can absolutely facilitate volatility charge. 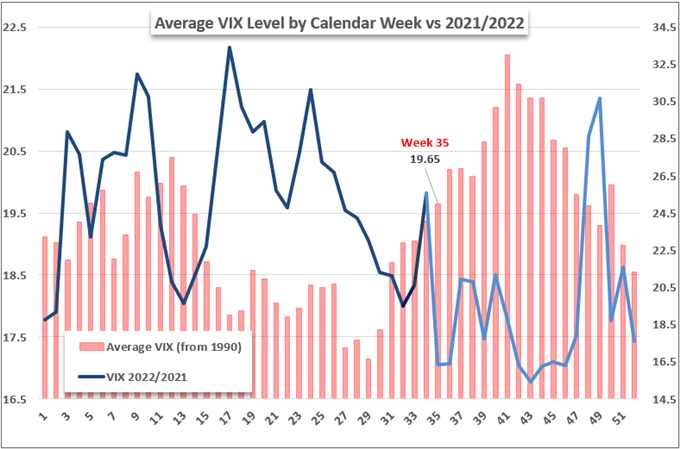 As far as the event risk that we are dealing with through these open 48 hours of the trading week, there was very little on Monday that would truly register from a global macro perspective. Setting aside Kashkari’s remarks, Fed Vice Chair Lael Brainard steered clear of any policy or economic remarks in her speech on the FedNow payment system. Moving into Tuesday’s trading session, there is a sharp reversal in the tempo of event risk. From US consumer sentiment to German inflation to a key Chinese firm’s earnings; there is a lot of speculative material to cover. My radar will remain up for updates around recession fears, monetary policy motivations and financial stability disruptions. You never know what headlines will stick. 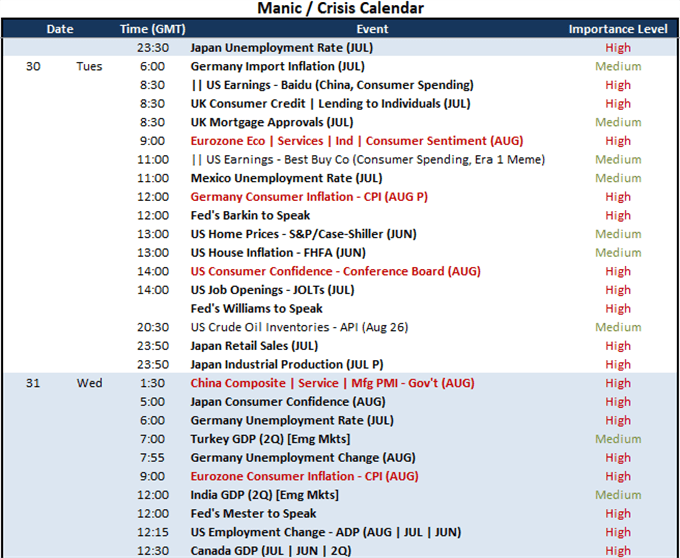 Considering the event risk and market conditions we will be dealing with ahead, I will start with a close observation of the US Dollar’s overall performance. This is not necessarily a currency bias, but it is important to gauge the perceived health of US assets from a growth and safe haven perspective given our backdrop. There seems a factor of Greenback buoyancy that is tied to the currency’s ultimate safe haven status, but more productive over time has been the anticipation for interest rates in the US outpacing many counterparts. The forecasted rate for Fed Funds rate through the end of the year, via futures, pushed a fresh multi-year high this past session owing to Powell’s warning that controlling inflation is the top priority. Another factor in this performance is the struggle from major FX counterparts. 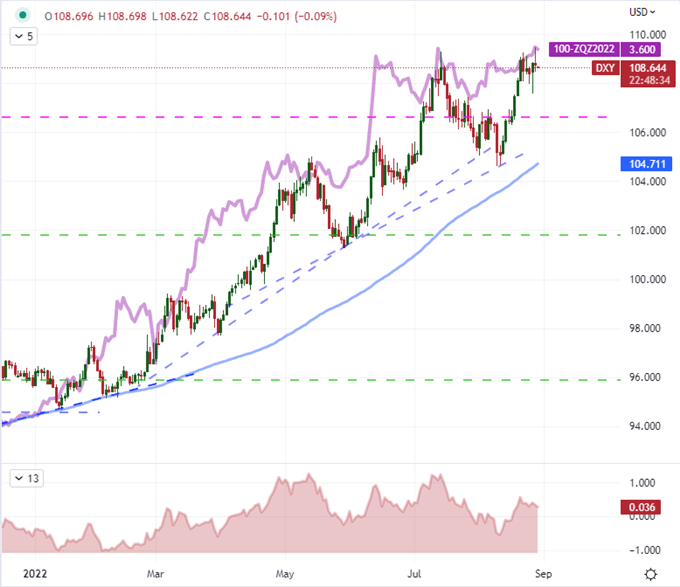 Setting aside the struggles of the third and fourth largest currencies in the world (Yen which is dealing with trade dependency and Pound feeling the commodity inflation crisis), the USD has seen a noteworthy bounce. EURUSD slide below parity this past week and there has been no meaningful follow through to speak of. There is something to say about the Euro’s side of the fundamental equation this past week. Despite the garbled message from the European Central Bank these past months, the remarks from certain official suggesting a 75bp rate hike should be discussed as the next meeting has shifting the interpretation of the otherwise dovish policy group to a state that is very pointedly not as open-ended on the accommodation side. Is there enough fundamental lift to eventually urge EURUSD above 1.0350? Time and technicals will tell. 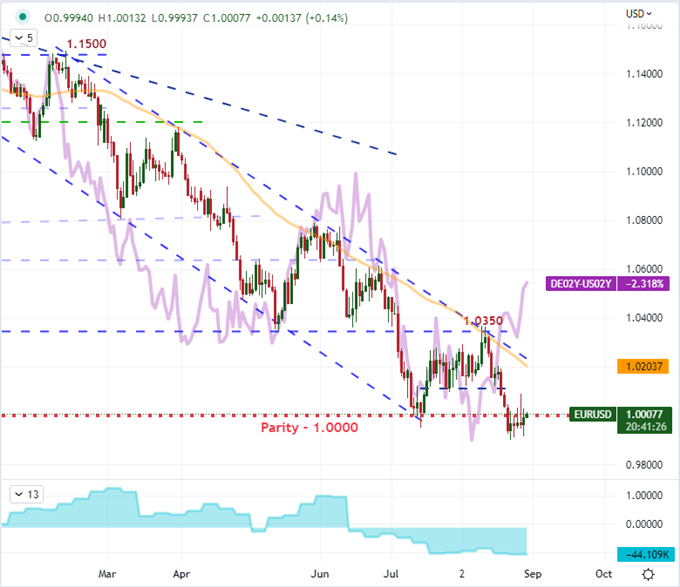 Far lower on the liquidity totem but a fundamentally-loaded Dollar-based exchange rate to watch this week is USDCNH. The outlook for the Chinese economies continues to ebb, but it is the opacity of data and policy that is exacerbating the problem. The Dollar-Yuan exchange rate is edging up to the same 7.0000 level that was previously considered a line in the side for polite monetary policy guidance. We cleared that figure during the height of the trade wars. Are we going to return to these conditions? The Upcoming Baidu earnings (Tuesday) and Chinese August PMIs (Wednesday) should be closely monitored for these prompts.

Chart of the USDCNH with 20-Weekly SMA (Weekly) 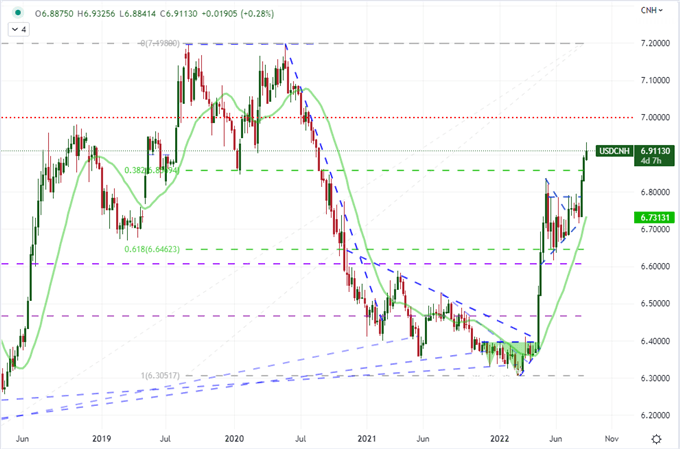