A Break, A Convergence and A Liquidity Drain

The week ahead looks like it will pass through multiple, contrasting phases. Seasonally, the 47th week of the year registers significant losses from the S&P 500, but we have the Thanksgiving holiday drain is an evitable event while the divergence between the Dow and Nasdaq 100 is likely to close with clear implications for the view on ‘risk appetite’. There is a lot going on in the week ahead which could represent difficult trading conditions for those that are simply falling back on the steadfast FOMO or buy-the-dip strategy. In addition to the seasonality distortions, there are lurking fundamental threats waiting for a spark to drive sentiment to an extreme such as the expected President Biden decision on the next leader of the Federal Reserve. Ideally, the fundamental sparks will resolve the S&P 500’s rapidly deteriorating wedge, but that would be an ideally convenient scenario. A break is inevitable given that we will soon run out of viable room before the index’s trendlines converge, but follow through would be better served to start from a rooted fundamental spot. 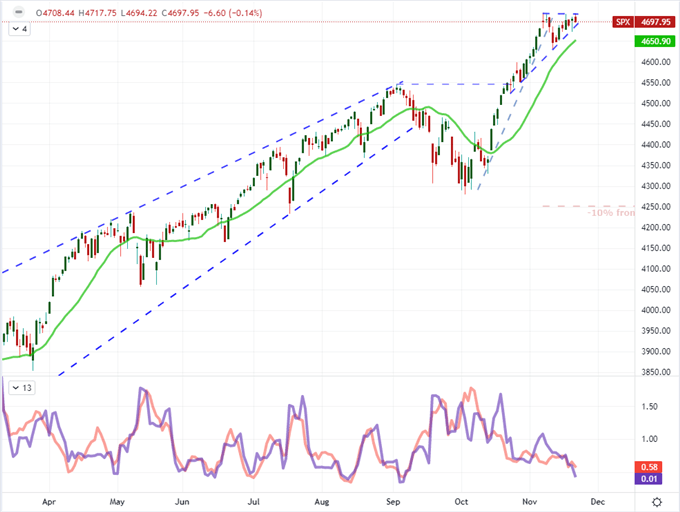 While the S&P 500 and its heavily-traded derivatives are one of my favorite benchmarks for ‘risk’, it is not the definitive word on sentiment for the broader market. For ‘rest of world’ equities (I like the VEU ETF as an aggregate), this past week saw a -1.5 percent retreat. The same flagging was registered in junk bonds (HYG -0.3 percent), carry trade (AUDJPY – 1.3), emerging markets (EEM -2.1) and commodities (WTI crude -6.0) among other assets that take guidance from investor sentiment. That doesn’t speak well to the persistent enthusiasm that seems increasingly unique to key US indices. In fact, the perseverance isn’t even uniform across American equities. An extraordinary divergence has in fact opened between the ‘growth index’ Nasdaq 100 (up 2.3 percent) and the ‘value index’ Dow Jones Industrial Average (down -1.4 percent). This deviation represents the heaviest negative correlation (-0.88) since August 11 and a very rarified situation overall. 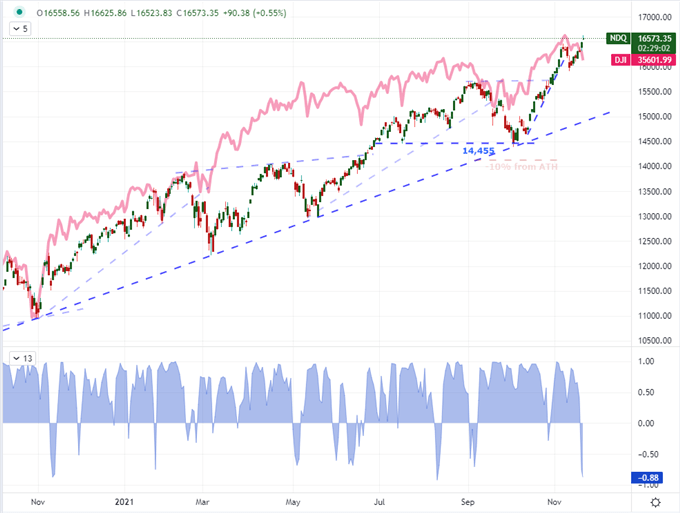 With the S&P 500 due a break while the Dow and Nasdaq need to reconcile their differences, I am also expecting a notable downshift in liquidity through the second half of the coming week. While it is principally the United States that sees a definitive market drain for its Thanksgiving holiday closure, the world has grown accustomed to downshifting around the absence of this large speculative participant. When markets are drained, developing a trend becomes very difficult to do – though sharper bouts of volatility can develop. Another interesting foible of the week ahead of us is the calculated seasonality. Historically (over the past 120 years), the S&P 500 has averaged its third worst week of the year through the 47th week. Consider that if we are talking Fed forecasts, an SPX break and very discordant risk assets. 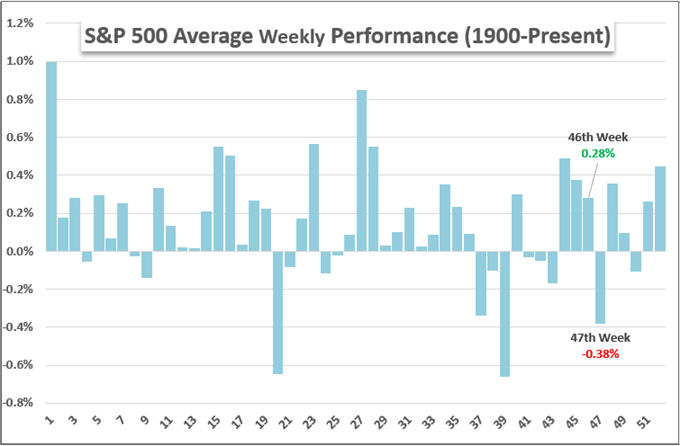 Top Fundamental Event Risk and the Dollar In Particular

For scheduled event risk over the coming week, there are a few highlights that should be positioned above others: including the RBNZ rate decision and US PCE deflator, which I will discuss below. However, there is plenty more on the docket that should be monitored for market-moving potential. Of the many individual events expected ahead, I will be watching a few themes. Earnings is one such matter for which we will be sifting through dregs of the third quarter, but consumer spending will still be represented with updates from the likes of Best Buy and Dollar Tree. For a more definitive reflection of growth, the November Market PMIs on Tuesday will give a timely update on economic pacing. October’s update offered a rebound for all but Australia and China. A flagging heading into holiday shopping season would extrapolate a greater concern. Then there is the monetary policy scale. We have seen interest rate expectations swell for the Fed, Bank of England and Bank of Canada this past week. Stats due this week can stir this pot, but yields can do the job all on their own. Meanwhile, the European Central Bank has thrown water on rate expectations while the Swiss National Bank (SNB) has allowed EURCHF to drop below 1.05. 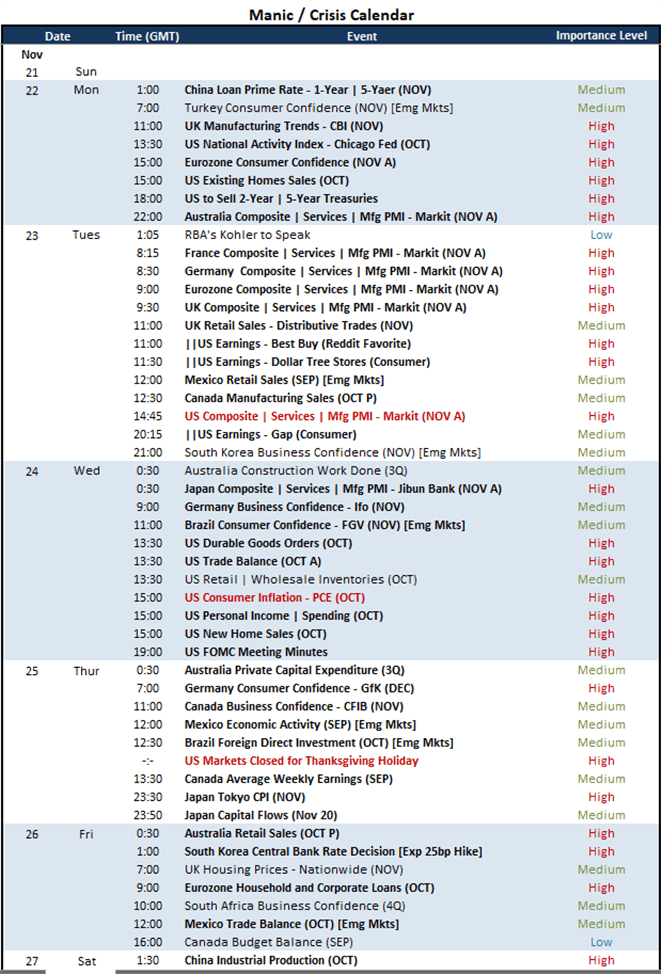 While there are more targeted monetary policy-oriented events on tap this week, there is probably no more poured over rate forecast than what is expected from the Federal Reserve. The Dollar threatened to pullback form its 16-month high this past week, but a resurgence Friday kept the bulls on the front foot. Looking to interest rate expectations in Fed Fund futures (also measurable in 2-year Treasury yields or swaps), we find that the outlook for 2022 slipped to as low as 47.5 basis points but ultimately ended the day back at 55 bps. Given that a standard Fed hike done in 25 bps clips, that implies fully pricing in two moves through the next year. A few Fed officials catered to those forecasts, Clarida and Waller, when they suggested it may be important to taper faster given conditions. Ultimately, the principal concern for Fed forecasting over the coming week is the expected decision from President Biden on who will lead the FOMC going forward. The decision seems to be between incumbent Jerome Powell and Vice Chair Lael Brainard. A nod to the former would be status quo and likely generate little response from Dollar or Dow. Brainard, on the other hand, is notably more dovish in demeanor, so speculative assumptions would be made. 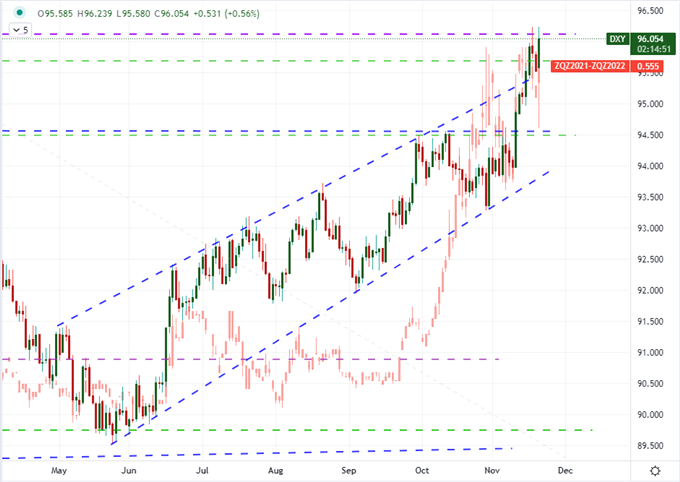 A Special Volatility Warning for the New Zealand Dollar, China and Covid

While the Powell/Brainard decision is a particular even that I believe can generate some significant volatility in the week ahead, there is another monetary policy-oriented event on deck that could fight for the position of top market-moving event. The Reserve Bank of New Zealand rate decision is scheduled for Wednesday morning in Wellington. The group is expected to announce its second rate hike in the cycle to bring the benchmark up to 0.75 percent. That is not much in the way of a meaningful yield, but it is a notable disparity to the zero and negative rates of so many counterparts. Besides, the market market’s real response is to expectations for the future. Swaps and government bond yields are pricing an aggressive pace of tightening through the foreseeable future. Given how heavily this is anticipated, a hike will merely ‘meet expectations’ with a measured likely market response. If they are dovish about their subsequent pace – and certainly if they hold – the bearish Kiwi pressure can be heavy. 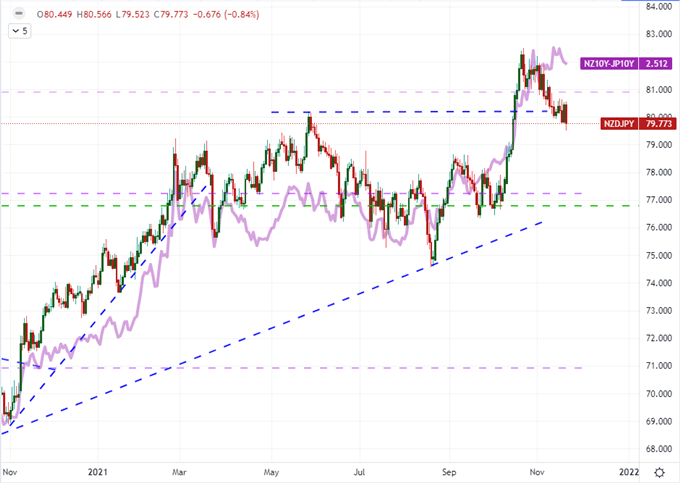 Outside of the fundamental docket or monetary policy, there are other matters that are stalking the speculative attention in the background. Once such theme that I’ve been discussing regularly these past weeks is the situation in China. While the markets and currency for the world’s second largest economy have been very sanguine of late, there remains serious unresolved issues. The economic backdrop was given an unfavorable bill of health from earnings like those from Alibaba while Standard & Poor’s and Moody’s took the time to warn us of the unsettled troubles for property developer Evergrande and housing more broadly. Another theme that has shown significant bite through the Euro is the warning of new economic shutdowns related to resurgence in covid cases. Germany said it was leaving open the possibility of locking down again as cases rose heading into the holiday season.