Dollar Extends Its Run and EURUSD Slips 1.1450 as US Rate Forecasts Soar

Perhaps it is the market’s deeply engrained conviction that an external force will always come into prop up the market (also referred to as ‘moral hazard’) or maybe an early drain on liquidity into the end of the week, but the S&P 500 pulled out of the tentative dive it had postured on through mid-week. The common representative of ‘the market’, the index actually closed a technical advance. From Wednesday’s close, the SPX edged a slight 0.06 percent higher. That is hardly a roaring endorsement from the buy-the-dip crow but it can effectively curb momentum from spreading fear through the financial system. The probability of a productive bear trend from the US indices was already hampered by the disparate performance of unrelated but risk-sensitive assets. Inconsistency in performance from the likes of the S&P 500, DAX 40, emerging market assets and carry trade will likely deter serious trends from taking root, whether on a bullish or bearish track. 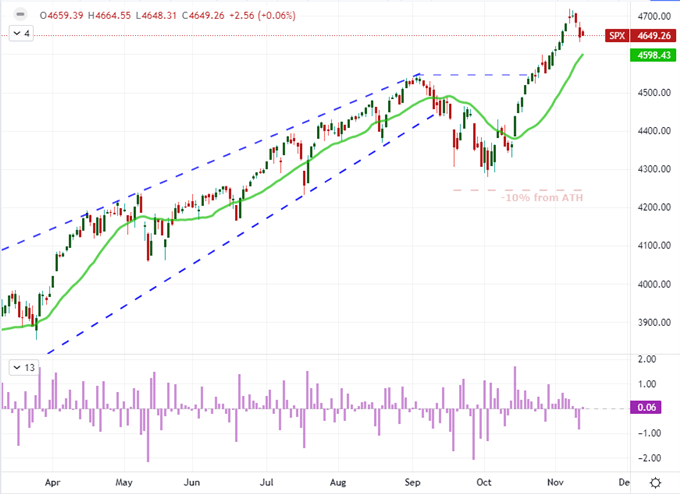 In contrast to the truncated performance of the stock market, the typically reserved EURUSD managed to extend its slide through heavy support. The break of 1.1500 came Wednesday after the US CPI reading charged the Dollar’s interest rate outlook and drew starker contrast to the Euro’s unflattering monetary policy horizon. In fact, forecasts for the ECB’s rate hike have this week shifted from a late 2022 liftoff out to 2023. So long as monetary policy is a productive fundamental theme for the markets, this is a pair to keep in mind as respective central banks are on opposite ends of the spectrum. From a technical perspective, this pair is passing through serious support. The zone from 1.1500 to 1.1425 represents a cluster of overlapping Fibonacci levels as well as ‘pivot’ level that has acted as both resistance and support since January 2015. As far as technical developments go, this is one of the more remarkable patterns to be found across the market. 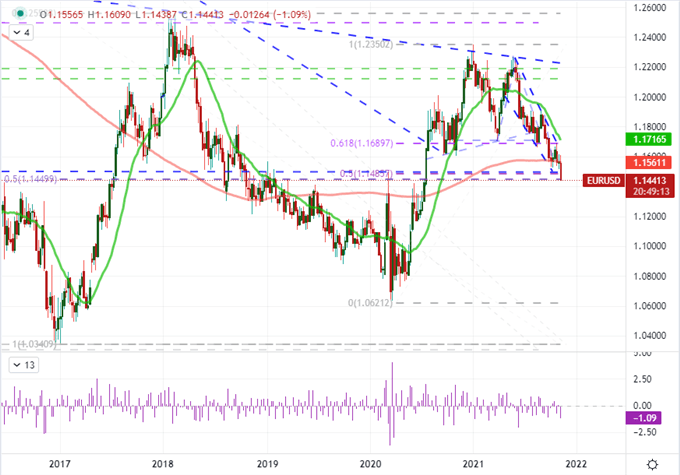 While the Euro’s contrast is noteworthy for a pair like EURUSD, it seems that the Dollar is doing the heavy lifting for this key cross; and it generally seems to be one of the most constructive trends across the market I tend to monitor for a macro perspective. While there may be a modest contribution to the Greenback’s bid through risk aversion and the infrastructure bill approval, I believe the bulk of the momentum for the currency is coming from US interest rate forecasts. Taking a look at Fed Funds futures, the outlook for monetary policy through 2022 swelled to 57 basis points. Considering each standard rate hike from the FOMC is 25bps, the market is fully pricing in two hikes next year. That has overtaken the previous peak back on October 29th. Why is the Dollar responding to these forecasts now when it was adrift during the rally in rate projects through the second half of October? Perception of a broad hawkish shift from the Fed’s major peers has abated, leaving the USD as the ‘best of the worst options’. 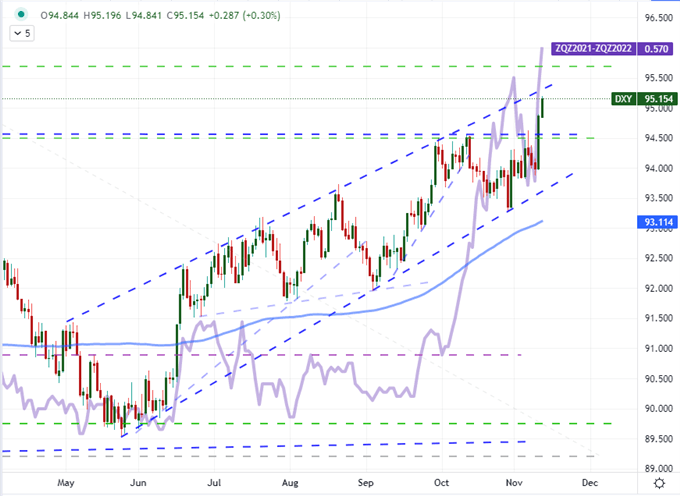 When it comes to the turn in monetary policy, there are a few aspects to consider. First is the scope of tightening over a given time, and the second is the timing of the first hike. From the CME’s FedWatch tool, we find that there is 55 percent chance of three hikes through the December 14, 2022 FOMC meeting. Looking at the Fed Fund futures contracts aligned to the various policy meetings, the market is pricing in a 69 percent chance of the first hike coming by the June 22nd meeting. To support three hikes in the back half of 2022, we would certainly need to see the first hike come that early. Otherwise, such an aggressive pace relative to the policy pace of the past decade would insinuate a hyper-inflation fight and/or a serious change in priorities from the central bank. The Fed is very reticent to change its well-crafted and slow-moving forward guidance as it could trigger broad repricing across the financial system, thereby sparking the very volatility they attempt to avoid. So, which party is in the wrong: the Fed or market? 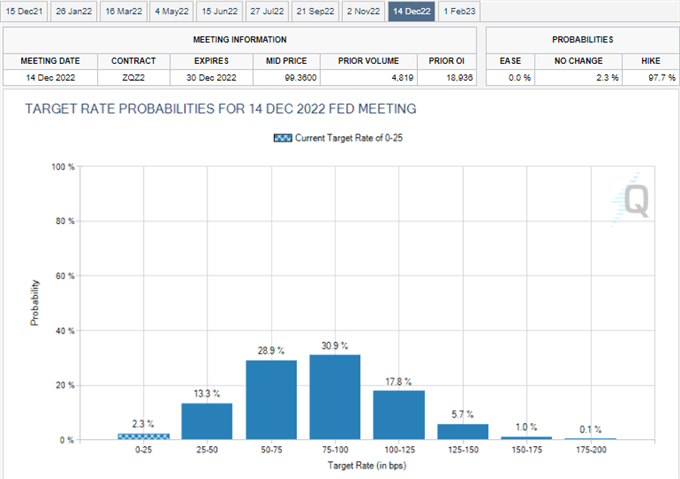 Scheduled event risk is lightening up into the close of the week. This past session, there was notable event risk from the UK, Mexico and China that carried potential for volatility. Though the reports are somewhat conflicting, it seems the market is comfortable with the news that China’s Evergrande had managed to pay all three foreign debt interest dues before the grace period closed and a technical default would be called. The FXI China large cap ETF responded with a smart gap higher but USDCNH didn’t budge. As for the Mexican Central Bank decision, the 25bp hike (to 5.00 percent) announced seems to have been fully priced. Indeed, it seems the market had expected even more given USDMXN rallied 0.9 percent in 15 minutes that followed the announcement. The bigger disappointment in data-triggered volatility was the UK’s list. While the GDP update for September beat expectations with a 0.6 percent print, against the 0.4 percent expected; the broader list of events was moderately disappointing. There wasn’t a clear enough speculative signal for the Sterling to gain traction such that not even GBPUSD with the Dollar’s strength would see acceleration. 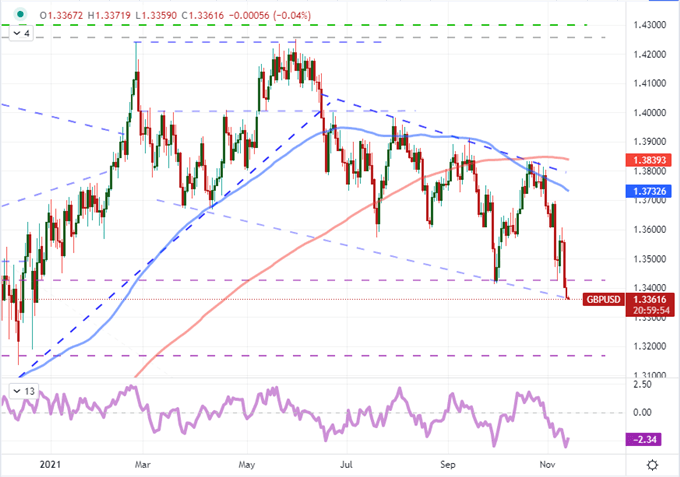 Through the final 24 hours of trade for the week, there are few high profile indicators or events that carry the potential to generate a strong response for local market assets – much less the financial system as a whole. The data point that stands out the most to me is the University of Michigan’s consumer sentiment survey. The confidence of the world’s largest collective consuming body matters to growth, but it is some of the subcomponent data from the report that truly capable of stirring speculative interest. In the last update, the one-year outlook for consumer inflation rose to its highest level since 2008 while inflation uncertainty over the same period was the highest in nearly four decades. The more bombastic the historical references get, the more attention this data will draw. 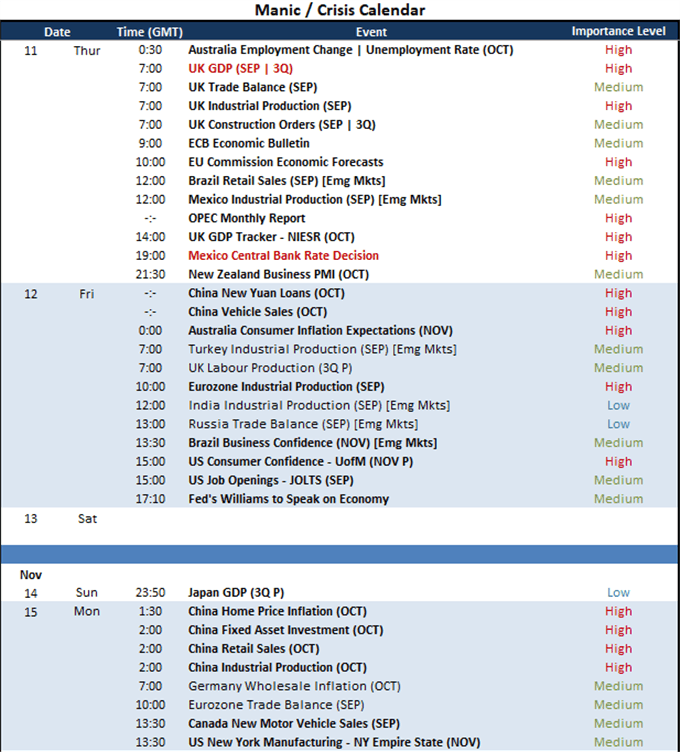