A US Session Reversal in Confidence

Risk appetite is not constrained to universal nor is it specific defined to any of the three major sessions of the typical 24 hour calendar. That universal influence was certainly on display this past session when a fairly robust sense of risk appetite carried through all the way until US liquidity hit its stride and then took a turn for the worst. The reversal in speculative appetite was clearly registered by the S&P 500 – and other major US indices. On the open, the benchmark US index enjoyed an impressive gap higher relative to Monday’s close, but the market wouldn’t progress much further than that initial lurch. As the North American session wore on Tuesday, the market steadied and then eventually dropped. Ultimately, we registered a remarkable gap higher on the open and then ultimately a small loss on the day. Much was made of the biggest reversal in fortune since October 2008, but that is just a by-product of elevated volatility in my view. The take away is that these markets remain exceptionally volatile but ultimately uncommitted to a prevailing speculative perspective. 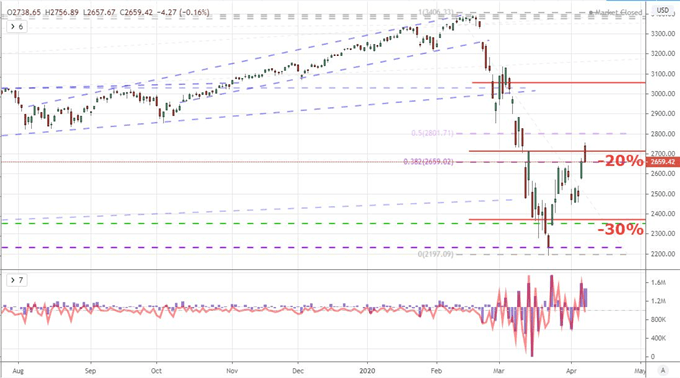 The turn in sentiment specifically in the US session is a good reminder of the progression of speculative appetite from one session to the next. No singular session owns the view of risk appetite, nor is it universally determined for a full day. There are often turning points, and the shift was registered in the afternoon of the ‘New York session’ Tuesday. The important next step is to see if the Asia session picks up this sense of uncertainty to build upon a more substantive risk aversion. 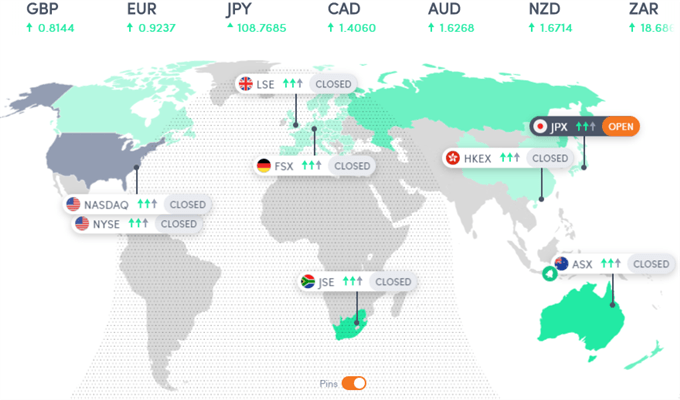 Reminders of Economic Strain vs A Steady Flow of Stimulus

As we keep tabs on the push and pull of speculative sentiment among the masses, there are conflicting systemic fundamental forces at work trying to tip the scales one way or the other. On the positive side, the wave of stimulus seems to keep pressing into shore despite my expectations that we were reaching the dregs of reasonable additional support. Following previous reports from the US that the government is discussing an infrastructure program and the Speaker of the House told her party that a $1 trillion stimulus program was in the works, we learned Tuesday at the White House press conference that the President will request an additional $250 billion in aid. Given the breadth and severity of recession forecasts, a steady run of support could prove the best source of stability. According to my poll, however, traders remain skeptical. The majority (50 percent) of respondents expect an ‘L’-shaped recovery ahead. 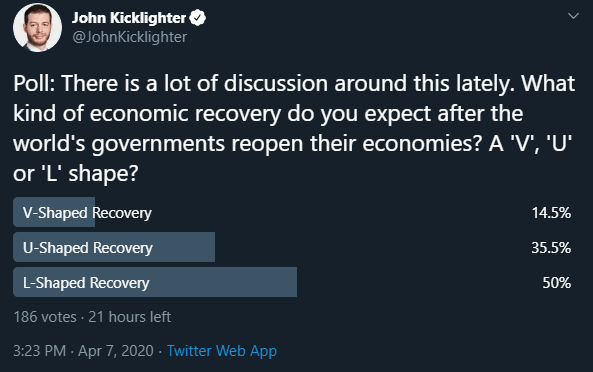 In the final run of my poll from the previous day, the traders that participated believe March’s implosion for capital markets didn’t fully address the economic and financial hardship that lies ahead. The prevailing expectation in my survey was approximately 40 percent saying they believe the incredible 35 percent drop from the S&P 500 in less than 6 weeks only accounted for 25-50 percent of the ultimate fallout for markets. Severity is one thing. Timing is another. 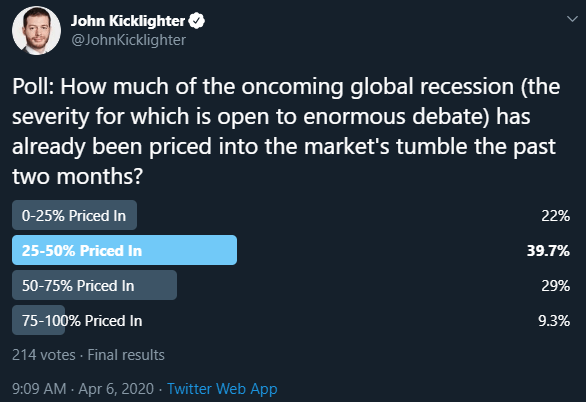 Dollar Slide Overrides Fundamental Crosswinds…but Not Due to Data

In less systemic news, there were both technical milestones and scheduled event risk to account for this past session. Few pairs had more targeted potential than USDCAD. For the Greenback, the four-day rally matched the pacing we have seen over previous weeks, but it didn’t hold the same conviction registered during the full-tilt liquidation pressures through previous weeks. The IBD Economic confidence figure could have played the part with a slide to 47.8, but that wasn’t exactly a earth-shifting indicator. From the Canadian Dollar’s perspective, the 26 reading from the Ivey PMI was far more recognizable and extreme. Nevertheless, the balanced potential for a break from USDCAD ultimately rendered an unexpected bearish break. This looked to be more a move from the Dollar than rally from the Loonie. 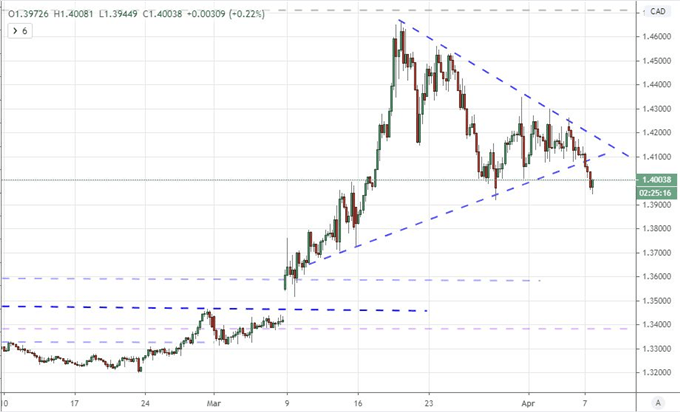 For the Greenback, the data matters for the measure of recession as it does with most countries, but they systemic influence carries more oppressive weight. The Dollar’s charge and subsequent settling these past weeks has been driven heavily by an absolute demand for liquidity. That said, the panicked drive to Dollars as the interest in havens was leapfrogged by blind demand for fungibility pushed the appeal of the baseline currency sharply higher. As that feverish pace settles, the US currency an ease back. To gauge this sentient scale and see the Dollar’s options specifically, I will be watching the currency’s performance not against the majors but rather the major emerging market counterparts – Brazilian Real, Indian Rupee, South African Rand and Mexican Peso. 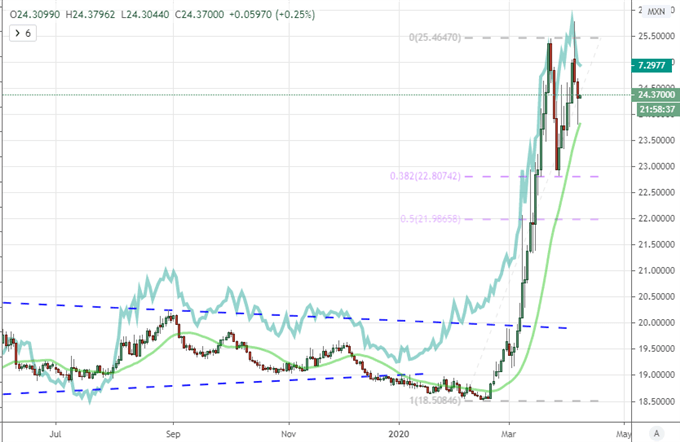