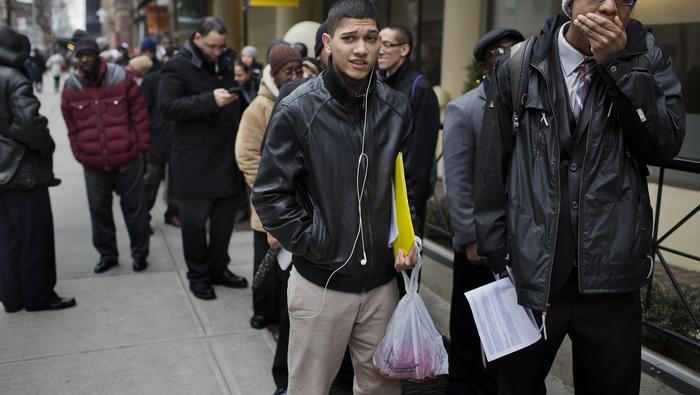 Record Highs a Day After a Near-Miss Spark of War

It is remarkable that little more than a day after Iran launched waves of missile attacks against a US military base in Iraq, the S&P 500 and Dow Jones Industrial Average have returned to record highs. There is no visible sign of fear or even reticence in this market, and that should keep market participants aware of their surroundings. As for the geopolitical flare-up between the United States and Iran, there remains crushing sanctions and language on both sides vowing to escalate to war for any further transgressions; but speculative sentiment seems to be treating that as the equivalent of unfettered peace. It does seem that the White House and Tehran have little interest in a costly (in both life and funds) protracted war, but it is also not difficult to imagine a mistake or misunderstanding triggering a complete loss of control in the situation. The probability of this happening is dropping, but remains dangerously high. The risk to markets should it happen is unchanged at 'severe'. Don't blindly follow the implied sentiment leader. 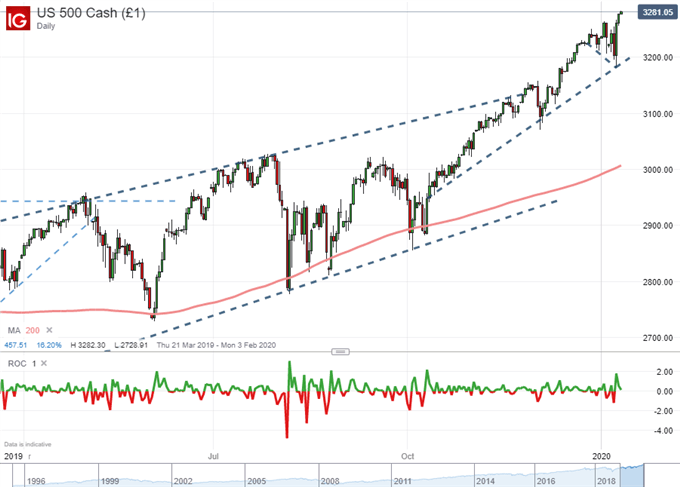 In the market's optimism, we are again seeing an appetite for momentum rather than a charge for genuine value. Value is associated to yield, income, dividends or other more regular rates of return. Indeed, the outlook for these growth-based measures aren't rising materially from extreme lows to begin with. Instead, there seems an opportunistic appetite for assets that are already engrossed in exceptional momentum as traders frustrated with stingy returns try to compensate by jumping on the bandwagon. Compared to the Dow's gap higher with new record high close (and intraday high), global indices, emerging market assets, carry trade and other bearers of the scarlet 'R' (risk) were less generous with their respective advance. I like to run ratios of the S&P 500 relative to these other benchmarks to visualize what the real preference is across the investing rank. 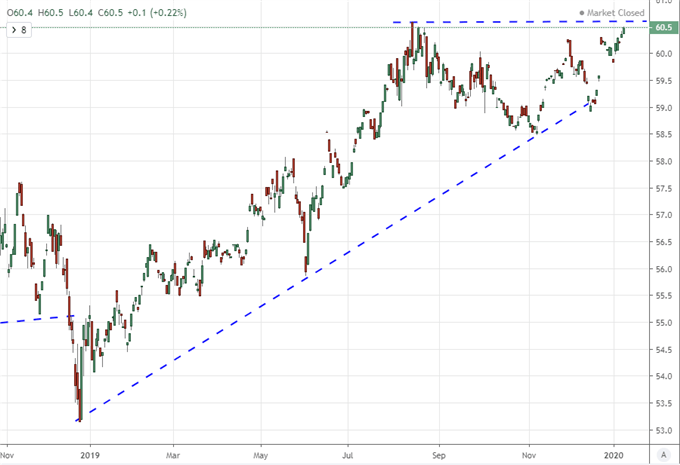 What Do People Fear Will Ultimately End the Bull Market

In the ranking of top themes that I keep close track of as threats to economic and financial bearing, geopolitical threats still carry the most immediate pressure. For the short-term, a sudden turn in the US-Iran seize fire could readily upend the market. Simply seeing the temporary peace hold on the other hand does not add any significant lift. That is a disparity in potential. Yet, what is next in the list? While there is little on the Friday docket to stand as an obvious catalyst for the more typical three themes I follow, there seems to be growing appreciate for the state of economic activity. In fact, the final tally in my poll on top thematic risk to the prevailing bull market that I conduction has the majority now stating recession fears as the crux. Adding to that, we had the World Bank's economic forecast downgrade and Conference Board's CEO sentiment survey let down earlier this week. A CFO survey from Deloitte was nothing less than remarkable though with 97 percent of respondents stating that they believe an economic downturn is either already underway or will be by year's end. 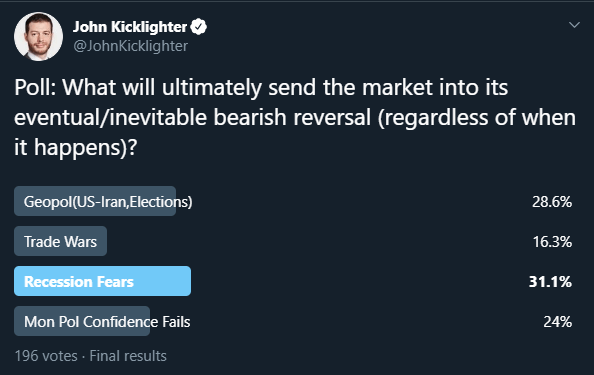 As for trade wars and monetary policy conern. We will return to these matters eventually. A lot of Fed speak this past session distilled for me into two noteworthy updates: Vice Chair Clarida warned that short-term funding could extend to at least April while Williams said changes to the Fed's framework needed to be considered carefully. The former suggests the financial system is more fragile than most appreciate while the latter remark reminds us that the extreme accommodation already in play leaves most major banks stretched and lacking for any solutions should there be any future problems. As for trade wars, President Trump suggested a Phase 2 trade deal with China may have to wait passage until afer the US election and a GOP aide suggested the USCMA vote in the Senate may not happen next week. Neither USDCNH nor USDMXN were put off by the news.

If we adjust our focus to find the higher potential for volatility in the very short-term, the USDCAD may be the most potential lightning rod. Both the US and Canada are due to report their December employment statistics Friday morning at the same time: 13:30 GMT. This doesn't just leverage the opportunity as many seem to think. Rather, it raises the risk. For example, there may be volatility from surprises for both but that charge may be in contrasting directions - such as strong data for both reports. Or they can both be right in line. Volatility does not automatically translate into a clear breakout or trend, though many often treat such convergence events as if it will.

Chart of the USDCAD (Daily) 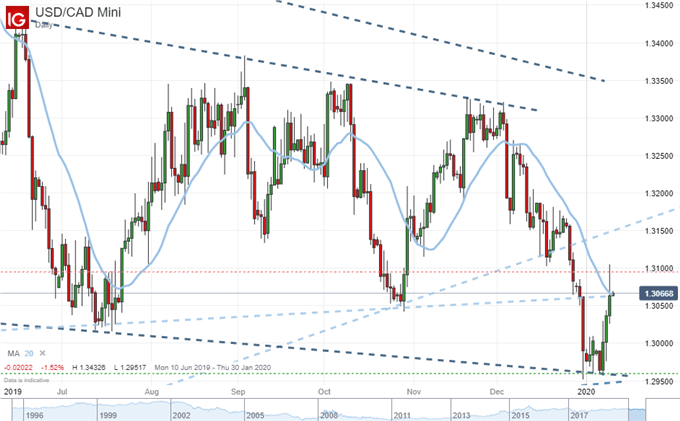 Individually, the employment report with the highest degree of short-term market moving potential is the Canadian jobs report. While its global market-moving implications may be far more restrictive, the frequency of surprise and the realized volatility for the Loonie is higher on average. Pairs like AUDCAD and CADJPY are more targeted and interesting. There is still a skew on the technical side for productive fundamental updates. As for the US jobs report, NFPs is more a global report. There is less charge for the Dollar in this data run typically, but its reach to elemental speculative currents is far more prominent. Here too is a skew of potential for technical and fundamental convergence. Given the Dollar's proximity to short-term resistance on DXY, EURUSD and USDJPY; a path-of-least-resistane range swing would present a more reasonable event for a Friday liquidity drain. 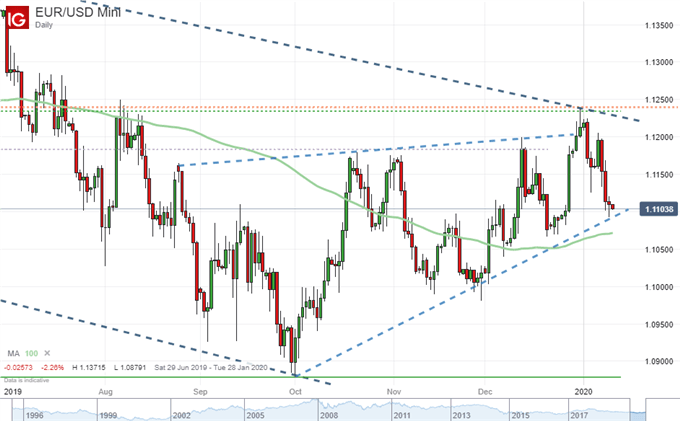