Key NFP Charts to Analyze Ahead of the Big Day

Current State of the Labor Market

The last non-farm payrolls report from the Bureau of Labor Statistics saw the addition of 266k jobs to the economy for November. This expansion of labor market strength marks the 110th consecutive month of growth and has added nearly 22 million jobs in that time. The unemployment rate, now at 3.5%, sits near historic lows and hovers at the Federal Reserve’s lower range for the natural rate of unemployment – considered to be the lowest level of unemployment an economy can realistically achieve over a short time frame. 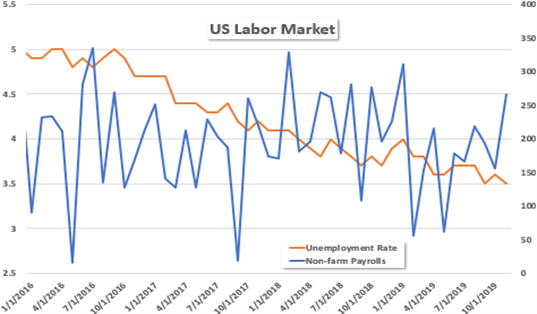 The US economy overall is now in its 126th month of expansion, the longest on record. Consequently, long-awaited wage growth has begun to shift up in the past year as the labor market continues to tighten, with average hourly earnings rising 3.1% on a year-over-year basis.

Measuring Strength in the Labor Market

In the United States, the Bureau of Labor Statistics is the principal government agency tasked with measuring, analyzing and disseminating the strength of the labor market. The BLS typically releases its report for the preceding month on the first Friday of each month. This report, commonly known as the “Non-farm Payrolls report” contains detailed insights into the state of the US labor market, including total jobs added or lost excluding farm workers, private household employees, and non-profit employees, the sectors experiencing those losses or gains, demographics, and income data. This report is often a major market-moving event.

Given the importance the labor market has on the economy, a litany of tools, indexes, and surveys exists that aim to give insights into future strength or weakness of the labor market. For the United States, popular surveys that include components on the job market include consumer confidence surveys from the University of Michigan and the Conference Board and Purchasing Managers’ Indexes from the Institute for Supply Management and Markit Economics. There is also additional official government data, such as jobless claims and Jolts Job Losses. Furthermore, the relationships that could be drawn between these labor market indicators, especially when contrasting to historic trends and inflection points, offers further insights into forecasting future trends.

Leading employment indicators are used as signals for the direction of where the labor market is headed in months ahead. One of the most popular leading indicators is the ADP employment report, typically released several days before the BLS NFP report. Market participants typically use this as a preview for the BLS report, although there are commonly deviations between the two. However, when viewing the overall trend, the ADP figures serve as a good bellwether for the direction of jobs added or lost. 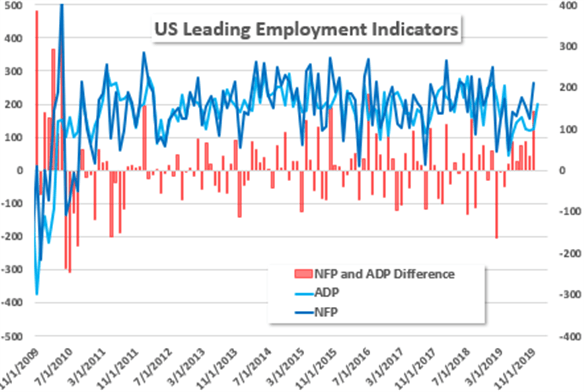 The Institute for Supply Management releases another closely followed jobs indicator in the form of their report on business, which is released in two separate reports for the services and manufacturing sector. Over two-thirds of the US economy encompass’ services, with manufacturing making up the remaining third. Consequently, the services report from ISM typically has a more potent impact on future jobs numbers. Still, ties between both sectors exist and a ‘spillover’ effect remains possible, particularly if a divergence goes on for an increased length of time.

The impacts from the US-China trade war, now in its second year have caused a manufacturing recession in the United States as the ISM Manufacturing survey entered its 5th month of contraction in December. As a result, fears of a spillover in manufacturing weakness to the services side has manifested in recent months. Still, the services side remains resilient as consumers prop up the larger part of the economy. 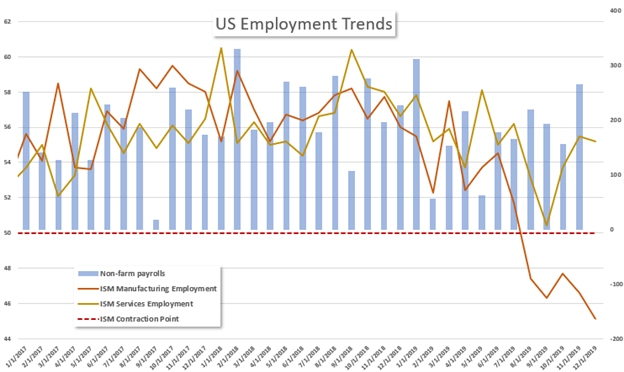 Another popular leading indicator that market participants reference are consumer sentiment surveys. The most popular of these are the Conference Board’s Consumer Sentiment Survey and the University of Michigan’s Surveys of Consumers. Like the ISM reports, these surveys are released monthly and contain their own employment index. Unlike the ISM reports, which surveys purchasing managers, consumer sentiment surveys gather data from a sample of consumers.

The Conference Board’s Employment Trends Index is particularly insightful for traders, as the index aggregates data from several sources, including its own consumer sentiment survey, as well as official government data. This survey is released for the current month on the last Tuesday of each month. 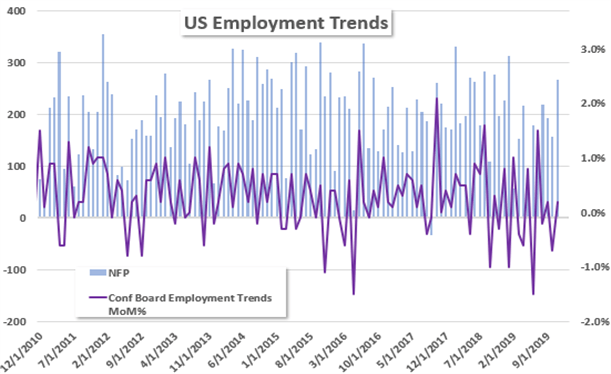 Like the Conference Board, the University of Michigan’s Survey of Consumers report also highlights an employment component. However, the survey does not have an aggregated index, but instead has stand-alone components which could be compared to current labor conditions. For instance, the survey asks participants about their expected outlook for unemployment during the coming 12 months. When viewing this component in the University of Michigan survey, one could spot notable drops in non-farm payrolls following exceptionally high readings in the index. 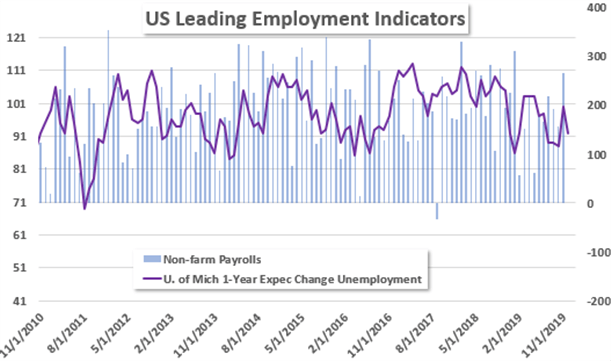 While the previously mentioned indicators and indexes remain popular among investors and analystsalike, many others exist ranging from official government data such as weekly jobless claims to independent business associations such as the NFIB hiring plans index. Attempting to forecast strength or weakness in the labor market remains a popular theme given the relevance to markets and the economy overall.