If we were measuring market potential through the number of high-profile scheduled events and data releases on tap this past session, Wednesday would been considered an exceptionally quiet session. That view would seem to have panned out if we were to take the Dow's activity at face value. The blue-chip US index was little moved on the day with a very stoic range overall. Further, in context of the entire week, this benchmark's average daily range (three-day tenor) is the lowest since July 30th - a period that happened to represent consolidation before reversal. We shouldn't immediately draw conclusions from such a frequent and non-directional pattern, but this reflects well on the circumstances at hand. With sentiment represented well by this stretched US equity index barely off record highs, it is possible to rouse the bulls; but fostering a genuine trend requires far more conviction than just a technical break gleaned from a short-lived data update and complacency. 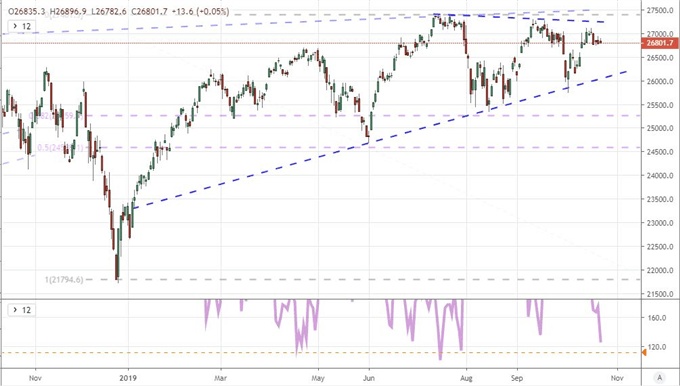 While there were many companies reporting their quarter this past session, a few stood out for their representation to the market as a whole as well as systemic issues like trade wars and the struggle of the global economy. Large equipment manufacturer Caterpillar that is known for its representation of expansion through general demand reported earnings per share that missed on a shortfall in revenue while also downgrading its forecast. The United States' primary airplane manufacturer Boeing stated its EPS was $1.45 versus an already throttled $2.09 projection. As a key Dow component, this is painful; but there may be a silver lining here: the implications of the grounded 737 model may curb the White House's appetite to use this company as a flash point for further US-EU trade war escalation. Another growth/trade war front was auto manufacturer Ford which beat on the past quarter by lowered its forecast by $500 mln with explanation being shared by trade wars. The bright spot was Microsoft which beat profit expectations by 21 percent. How the New York market opens Thursday will be very telling as to the market's priorities and underlying bias. 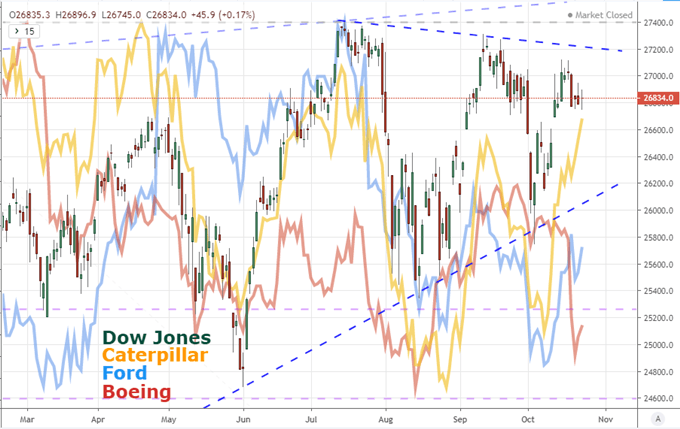 Earnings is playing a key roll in the growth assessment via the business cycle, and as described above, the certain companies are better positioned to reflect this systemic perspective. Yet, there will be another medium for this theme over the upcoming session - something a little more targeted. We have Korea's 3Q GDP update which is the most prominent government reading on tap and a precursor to next week's US and Eurozone updates. That said, there is something timelier and more global in nature ready for release through Thursday's long session: October PMIs. The broad (manufacturing, services and composite) readings are due for Australia, Japan, key Euro-area and the US. That is a meaningful overview of the 'world'.

Chart of US 10-Year to 2-Year Treasury Curve (Daily) 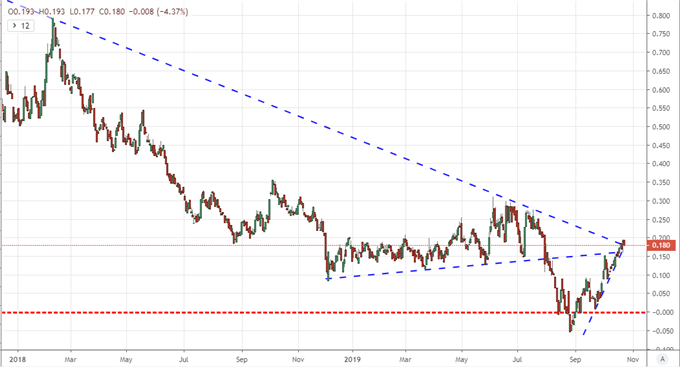 As for evaluation of economic health as it translates for investors, there are a few ways to register this run of data. The US Treasury yield curves (10-year to 2-year and 10-year to 3-month) can tap into the measure du jour among armchair economists (I count myself among this rank). This normally-arcane reading carried so much weight that it triggered broad risk aversion just a few short months ago. Does the Treasury yield curve still hold this much sway over speculative appetite? That remains to be seen. Looking at the range risk leaning assets, I believe there is an overt skew in the underlying fundamentals that will make for a potential to probability imbalance. A general bullish lean is well supported in 2019, but progress higher will require a more robust economic backdrop - which is very improbable at this stage. Alternatively, further signal that the economy is approaching stall speed continues to meet complacency, but it is also aligning to a path of least resistance if ranges on the S&P 500, ACWI and EEM are any indication.

The bearing of the global economy isn't the only matter up for grabs to those seeking volatility. Trade wars is a lingering risk with the US-China terms still not black and white following the verbal 'phase one' agreement, Europe debating whether to retaliation against the US and data releases accounting for the additional pain accumulated on efforts thus far. Another matter pushed to the backdrop recently will be thrust back to the foreground thanks to a key event risk Thursday: the European Central Bank (ECB) rate decision. Arguably the most dovish of the major central banks, the probability that they will further an already extreme policy mix after September's massive upgrade is a low priority. That said, there is a very overt rift forming between those willing to stay the unorthodox stimulus course and those that are worried about the fallout. How pronounced is that split with President Draghi retiring and Lagarde stepping in? And, when contemplating EURUSD it is important to remember that the Fed's bearings are prone to their own speculation with an expected third consecutive rate cut next week. 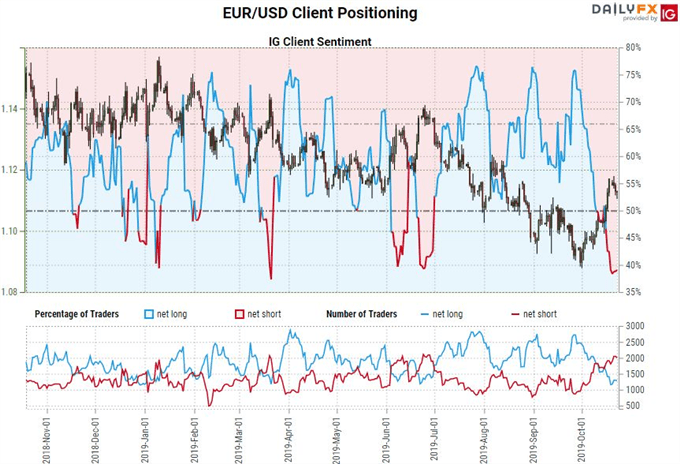 Another theme that traders would be wise to follow even though it seems to have lost the mandate of momentum is the course for a definitive Brexit. After Prime Minister Johnson received a rejection on his accelerated withdrawal plan on Tuesday, the drive and market focus has shifted. The next step is now with the European Union who must decide on whether to issue another extension of the Article 50 deadline (very likely) and how long that added time would be (the point of serious contention). According to sources, the French authorities are particularly skeptical of granting the requested 3-month extension that was determine through the so-called Benn Act. President Macron reportedly does not want to allow anything beyond November 15 unless there is a clear reason for more time (such as election or referendum). That would suit Johnson as he is aiming for a quicker exit as Brexit fatigue grows serious. In the meantime, this raises the stakes for the Pound when it comes to uncertainty over bearing and volatility.

Chart of GBPUSD with 5-Day Rate of Change (Daily) 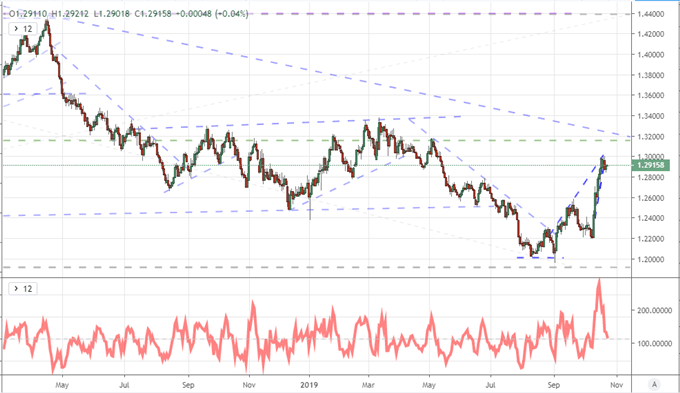