The UK House of Commons has approved in principle the proposed Brexit deal reached by UK Prime Minister Boris Johnson and the EU but rejected his truncated timetable for the necessary legislation, the EU Withdrawal Agreement Bill, to be passed. He had hoped it would pass quickly through the UK Parliament but that was voted down as Members of Parliament decided they needed more time to debate it and table any amendments.

The EU will now need to grant an extension to the October 31deadline for the UK to leave the EU and it is, as yet, unclear how long the extension will be. A three-month extension to January 31 is the most likely outcome but it could be longer, shorter or flexible – a so-called Flextension.

Donald Tusk, the President of the European Council, has said he is favor of three months, as requested by the UK Parliament, and is due to consult EU member states over the coming days. All this makes a no-deal Brexit less likely, and should therefore benefit GBP, although it is falling Wednesday for the second successive day. 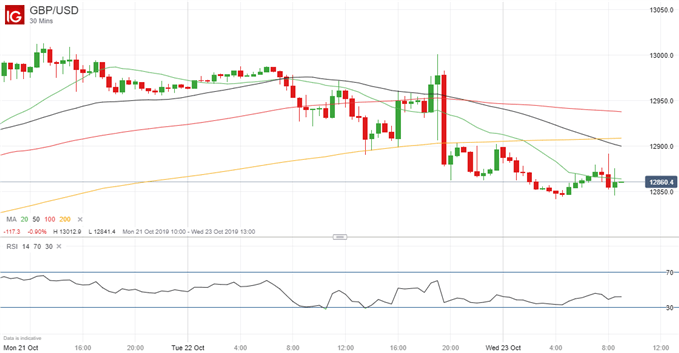 The key for GBP/USD remains whether it can breach resistance at the psychologically important 1.30 level. If not, an extension of this week’s losses is likely.

Further ahead, a UK General Election now seems likely before the end of the year, allowing Johnson to argue that the deadline was missed because of Parliament, the courts and the “establishment”. Whether he wins it will likely depend on whether he can persuade voters he was not to blame, and thereby fend off Nigel Farage’s hardline Brexit Party.