The Tension on Risk Trends Breaks Before the Weekend

We were confronted with a broad and acute wave of fear this past week. By Wednesday, it looked like we were on the cusp of a more systemic collapse in sentiment. While there was a slump across regions and asset type, nowhere was the edge of panic more recognizable than in the US indices. In particular, the S&P 500 and Dow were flirting with technical support that has defined the slow advance through 2019. Yet, just as sentiment was put to the test, the pressure broke and the speculative trendsetters pulled back from the ledge. The bounce was broad, but it does not register as the genesis of true conviction. Technicals show us well within range of recent months and most risk assets are trading at significant discount to their cyclical highs set last year. Whether we ultimately establish a clear bull or bear trend for weeks, months or longer into the future; it is first critical to establish conviction. 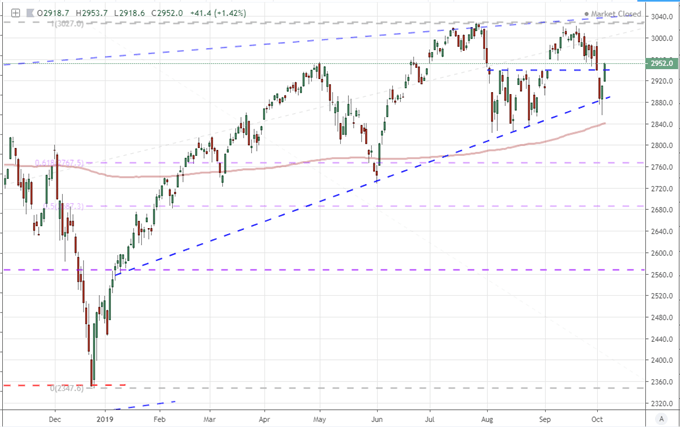 While it is important to keep close tabs on the fundamental sparks and pools of fuel in the open market, it is important to distinguish that momentum is unlikely to form around a mere theme - even a critical one. Volatility, perhaps; but a run that builds up a serious head of steam and draws the entire financial system with it is unlikely. That seismic shift will more likely arise through the collective greed or fear of the speculative masses. There is very little that can rival the motivation to take advantage of competitive returns or to avoid a hole being blown in investment accounts. While the US indices are my preferred measure for a single-reference 'risk assessment', they are particularly flawed at the moment due to the depth of complacency resulting from Fed support that has sustained a bullish bearing. Therefore, it is worthwhile when deciphering a short-term volatility move from a long-term trend intent to reference the correlation across risk-leaning and safe-haven assets. 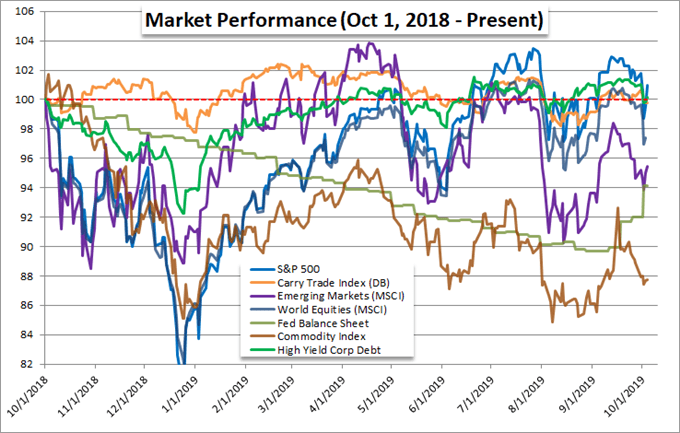 What is the Top Candidate for Market Movement Next Week?

While a collapse or surge in sentiment is the most productive means for driving the market, that isn't to say that fundamental catalysts will not play a critical role in starting the ball rolling or contributing to the momentum. I ran a poll asking traders to vote which of the common fundamental themes we have seen play a role in market movement these past weeks/months would be the most likely driver in the week ahead. The voting was close by the end of the Friday, but the focus was on trade wars. If we look forward, there are two active fronts to keep tabs upon. The more fluid and under-appreciated trouble is the emergent US-EU trade war. The US has announced its $7.5 billion in tariffs against Europe (10% on airplane imports and 25% for agricultural, industrial goods), to which Europe hasn't retaliated. The situation is skewed such that this will likely exert greater negative impact and limited positive. As for the US-China situation, there is more opportunity for a bullish turn - if such an unlikely improvement is ever seen. Talks are due to restart in Washington but that does not guarantee progress...as we have well seen. 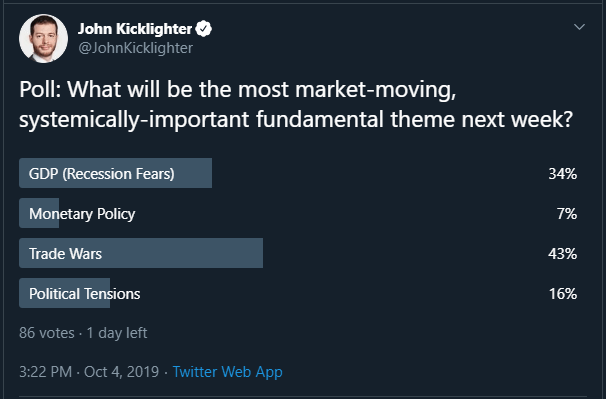 In the list given, I am more partial to the potential inherent to recession fears. Where trade wars are a clear risk, the end impact is through the economic trouble it creates. Through the end of Friday, the IMF issued yet another warning of the economic imbalance at hand. In its 2019 Annual Report (titled 'Our Connected World'), the group noted that the growth through the open 0f 2018 had fully dissipated. The crux to this pain was the state of global trade wars and the group warned it would deepen its analysis of such spillover and financial instability. In general, the market is still clearly sensitive to the state of economic health. High level data can readily be interpreted for its contributions to economic expansion. In this case, it is very difficult to imagine a genuinely encouraging development for growth while a sudden downdraft would almost be routine. 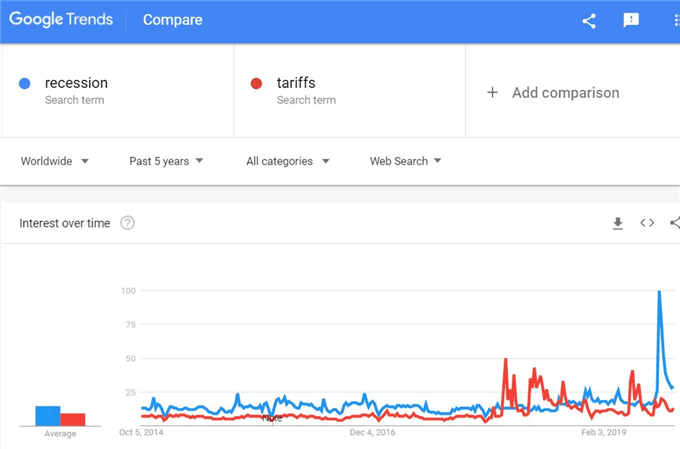 For monetary policy, the consideration is generally a follow on. It is unlikely that the Fed, ECB or other central bank will prove the catalyst of a sizable market move. We don't have any major rate decisions in the week ahead, only indicators that would contribute to speculation on subsequent policy meetings. The Federal Reserve is the most influential group at this stage, and it has committed to back-to-back rate cuts. A third cut before year's end is heavily anticipated, but does that change the equation for investors? Unlikely. The real risk is recognition that markets are no longer charged despite a healthy infusion by policy authorities. 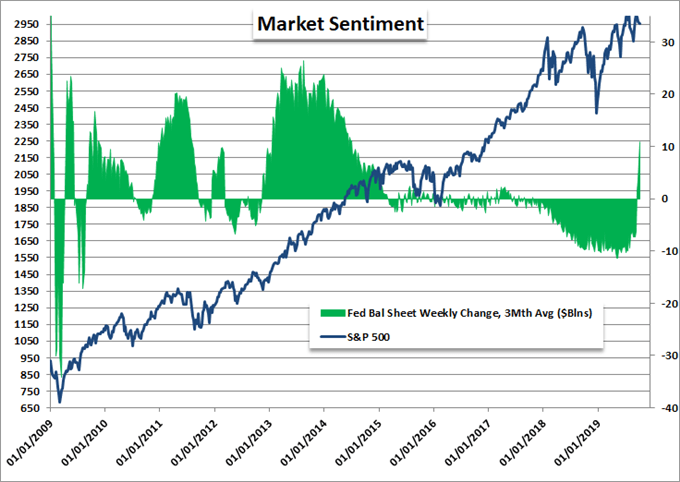 Another theme that we cannot afford to overlook is the impact incurred by political tensions. While there are issues unfolding around the world, the most news-heavy event is the ongoing impeachment inquiry taken up by the House of Representatives into the US President. Donald Trump didn't improve the situation by publicly calling on China to investigate a key political rival and his family - the accusation levied against him for through the Ukraine. This doesn't have a clear economic or financial impact even now, but it can tip the fragile status of risk trends.

Short-Term or Targeted Sources of Volatility to Watch

Outside of the systemic, there are certain concerns that traders should monitor for more targeted influence. From the US Dollar, there is a run of Fed speeches and no small number of scheduled events. The US CPI update will be a media-friendly update, but it doesn't carry the kind of weight we are really looking for. A top listing in regards to the hierarchy of high level fundamental themes is the University of Michigan's consumer sentiment report. In this data, we will see growth and trade reflections, alongside the latent hope still placed upon the central bank's shoulders.

Another specific highlight in the FX world in the week ahead is the British Pound. There is high level data on tap anchored by Thursday's UK trade and GDP figures for August. As important as this data is in general, it will struggle for serious market movement. That is because there is a much more influential fundamental issue carrying the day for the Sterling: Brexit. It was reported Friday that the Government has acknowledged that Prime Minister Boris Johnson would send a letter to the EU requesting an extension of negotiations if a Brexit deal is not secured by October 19th. The Pound volatility index is showing far more of the headline ping pong than GBPUSD itself. 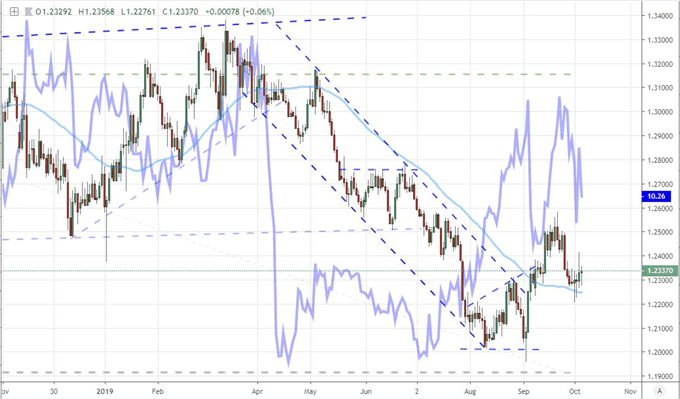