Even though the US-China trade war in a short-term truce, there is concern that it may only be a temporary reprieve, and that the damage may already be done: PMI readings from around the world suggested that the global economy is in the worst shape in a decade. Or, the global economy hasn’t been on this kind of weak footing since the Global Financial Crisis.

With global growth fears dominating investor sentiment this week, there has been a steady demand for lower yielding currencies and safe haven assets. To no surprise, US Treasury yields have dropped quickly as investors shift funds into ‘safer’ assets. After some of the worst stretch of US economic data in recent memory – a ten year low in US ISM Manufacturing, three-year lows in US ISM Services, CEO & CFO confidence, and a six-month low in US retail sales -- concerns over aUS recession are rising again. 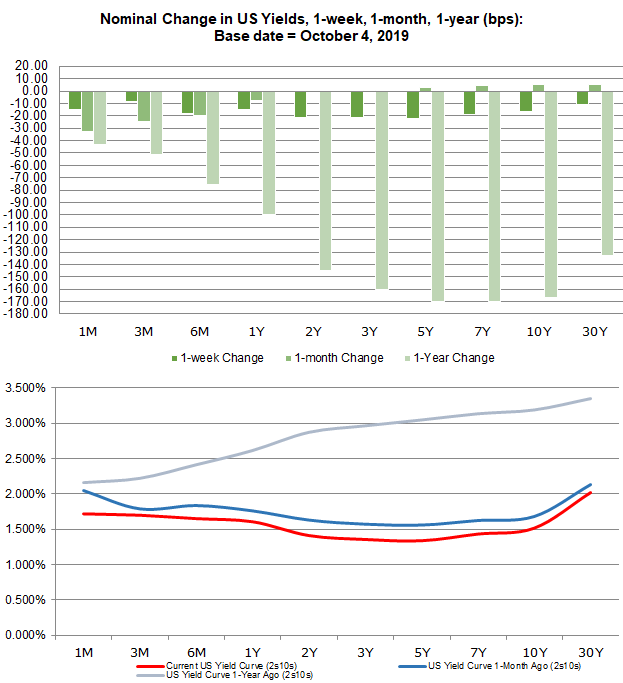 The drop in both short-end and long-end rates suggest that investors’ expectations for the Fed’s rate cut cycle have been pulled forward over the past week, and perhaps importantly, that the Fed rate cycle will cut deeper than previously envisioned.

There is now a 77% chance of a 25-bps interest rate cut at the October Fed meeting, according to Fed funds futures. If not, there is a 92% chance of the rate cut coming at the December Fed meeting. But if the Fed does indeed cut rates in October, then rates markets are pricing in a 50% chance of another 25-bps rate cut by the end of the year. 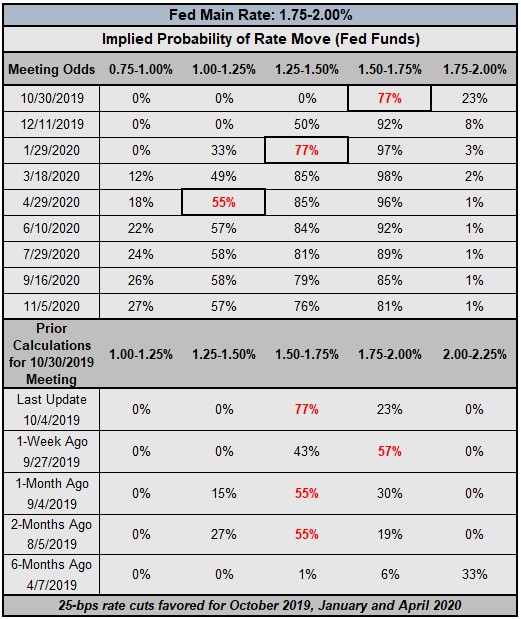 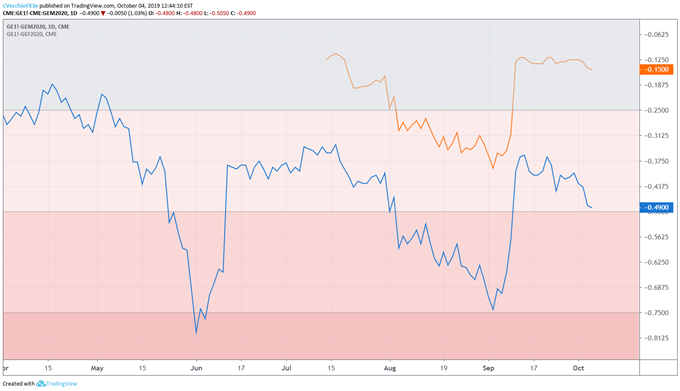 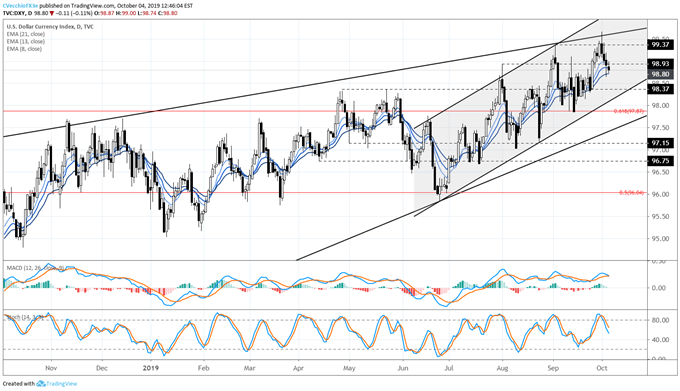 In our last DXY Index technical forecast update, it was noted that “above 99.04, there will be a fresh closing high in place for the DXY Index with little standing in the way of a run to the yearly high at 99.37.”

Earlier this week, on October 1, the DXY Index pierced 99.37 on its way to a fresh yearly high of 99.67. But like on the first full trading days of August and September, the run to fresh yearly highs was marked by a bearish shooting star candle. To this end, the area where the DXY Index found resistance this week was the trendline helping constitute resistance in the longer-term bearish rising wedge – an ominous topping pattern that persists.

At present time, the DXY Index’s bullish momentum profile has weakened in recent days. Price is below the daily 8- and 13-EMAs – but is still holding above the daily 21-EMA. Daily MACD is readying to turn lower (albeit in bearish territory), while Slow Stochastics have already started to drop back towards their median line. are quickly advancing to overbought territory. Further development is needed before a directional call can be made. 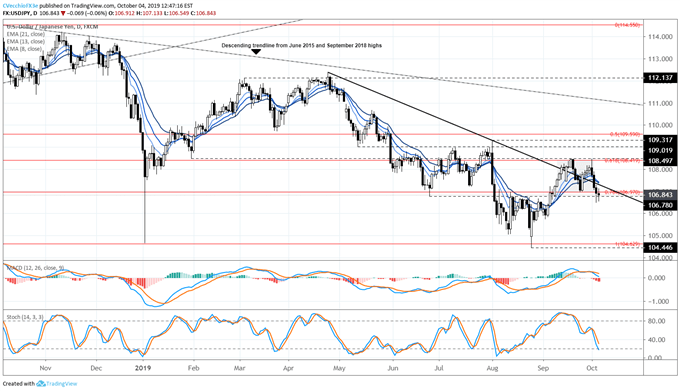 In our last USDJPY rate technical forecast update, it was noted that “a move through 108.42/50 would increase the likelihood that USDJPY rates would return to a 30-pip area around the May 10 swing low and August 1 bearish outside engulfing bar high near 109.02/32. A move below the weekly low at 107.45 would suggest a false breakout has transpired in USDJPY.”

It appears that the latter scenario – a false bullish breakout – has started to play out. USDJPY rates have broken back below the late-September swing low and 76.4% retracement of the 2018 to 2019 high/low range near 106.78/97 as well as the descending trendline from the April 24 and July 10 swing highs. The daily 8-, 13-, and 21-EMA envelope is in bearish sequential order. Momentum indicators such as daily MACD has turned lower (albeit in bullish territory), while Slow Stochastics have nearly fallen intooversold territory. The path of least resistance for USDJPY appears to be to the downside. 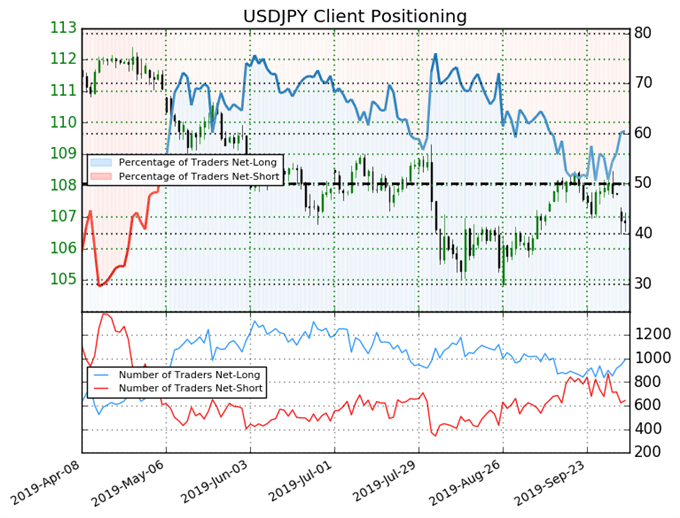