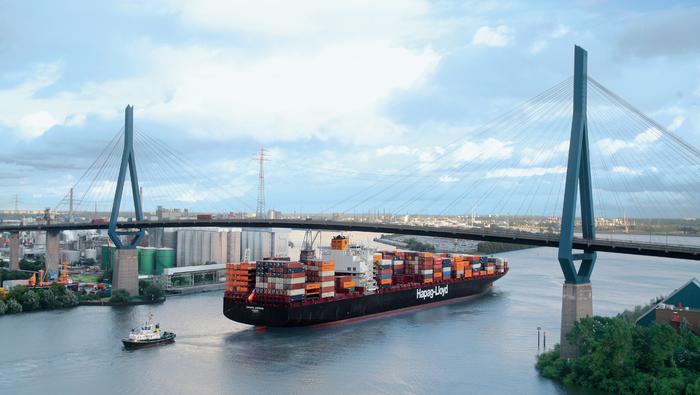 Risk Aversion Shows Up, The S&P 500 is Poised for Serious Trouble

Sentiment wavered Tuesday and it took an unmistakable tumble through Wednesday. It was difficult to miss the unadulterated 'risk aversion' that caught traction throughout the financial markets this past session. The slide was a universal one for those markets that have a connection to sentiment when greed or fear are the prevailing wind. The emerging markets gapped lower in its week-long reversal. Carry trade showed the pressure throughout the Yen crosses. Treasury yields already battered by recession fears have extended their slide. Global equities as measured through the ACWI were also furthering their retreat from over-burdened range resistance with the 'rest of world' (ex-US) VEU index showing its submission to the theme. My principal measure of this slide in confidence to borderline fear was the performance from the US indices. While the Nasdaq offered a breach of its 2019 technical support, it is the S&P 500 that draws in the greatest speculative interest among its many derivative outlets. It dove through support in the former August range high and dropped to its own floor for the year. The impact was unmistakable, but the more critical milestone to seismically shift conviction holds around 2,885. 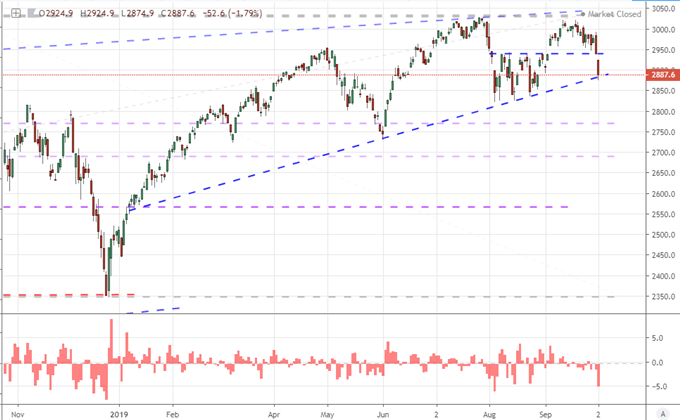 Technical patterns like the one we have seen staged by the S&P 500 or Dow can generate considerable market heat all their own. Pent up momentum from a market running serially askew from underlying fundamentals can be unleashed by a high-level technical pattern as readily as the headline attached to a key theme. That said, the real weight behind the market is in the willingness to register and incorporate developments that add to the market’s general unease. This is what happens when the undercurrent of the market bias shifts. Over the past decade, most of our time has been spent in a 'complacent' market where even questionably supportive developments lead to gains while genuinely troubling issues are conveniently overlooked. We are not yet to the stage where even favorable data is summarily ignored as fear hits upon every disturbance in growth, but there is a more obvious balance in response these past few weeks. The best means to establishing this swing in conviction is to look for the broad correlation in risk assets. As the saying goes: 'in a panic, all correlations go to one'. 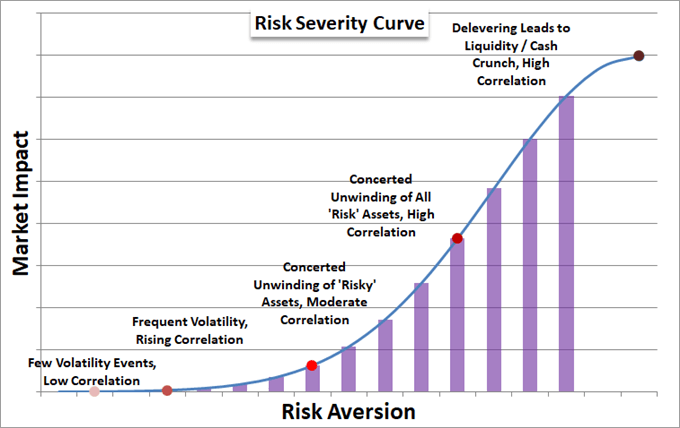 If you were looking for the primary fundamental driver through this past session, you'd need to be mindful of the flux of liquidity and recognize that headlines are not always the most accurate measure of sentiment. If you went by what was topping headlines through Wednesday, the overwhelming amount of political discussion around the impeachment inquiry and the questionable strategy by the White House to rebuff the pressure spilled once again over to market talk. There were more than a few headlines that declared markets were under pressure thanks to the uncertainty of the political situation in the United States. Yet, this is not a charge that readily translates into economic or financial impact. What can make that connection readily though was the news that trade wars have taken a serious turn for the worst. 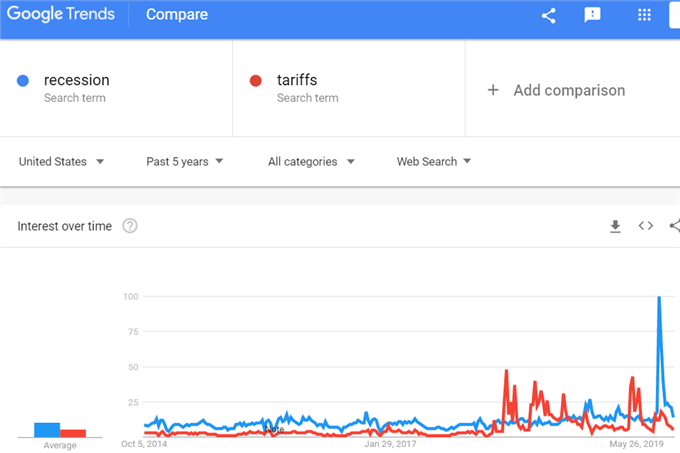 Most of the risk aversion that occurred through Wednesday's session took place before the most remarkably development on the day dropped: the news that the United States was using the World Trade Organization's (WTO) ruling on how heavy the country could go in countering perceived unfair subsidies provided Airbus. The Trump Administration wasted no time with the decision by announcing $7.5 billion in tariffs would be drawn from a 10 percent tariff on imported EU airplanes along with a 25 percent levy against European agricultural and industrial products. Those later two categories will ensure retaliation. The European Community was already reportedly considering a retaliation scheme before the US announced its plans, and what we have witnessed certainly fits the most aggressive end of the spectrum. Given the US side of this situation was announced in the very final run of the US session, expect the market to pick up the sentiment implications into Thursday's open - especially if the EU retaliates.

The pressure leveraged through trade wars is most effective in stirring volatility and selling pressure through its implications for growth. We have been warned by the WTO on Tuesday that the outlook for trade has been ravaged by trade wars, which in turn has led their forecast for GDP - along with numerous other groups like the OECD - to flounder along the skirts of a technical recession. Ahead, a typically underappreciated global growth update is due in the form of the ISM's service sector activity report. The US is a service-based economy, accounting for nearly three-quarters of output. If this measure sinks drops towards 50, and certainly if it slips below the milestone; don't be surprised if recession fears drive us through the next speculative floor. 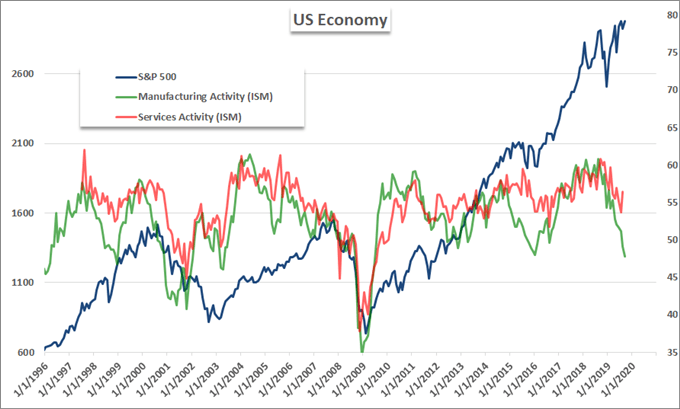 Other' Fundamental Matters Like NFPs, RBA Momentum and Brexit Pushed Further Into the Background

As we find sentiment starting to take greater influence all on its own, it is important to put other event risk with high level volatility potential into perspective for trend potency. For the Dollar, we still face the September nonfarm payrolls (NFPs) which are a market favorite. Yet, what critical theme will the tap into? The most direct implications are for Fed policy. The anticipation for the third consecutive 25bp cut come October 30th holds above 70 percent, but what will that do in the context of the prevailing fears? Not much. There is still a growth implication, but I wouldn't expect the same level of speculative anchoring in the lead up to this month's release as we have seen in the past - especially now with the Dollar squarely in the sights of the trade war retaliation. 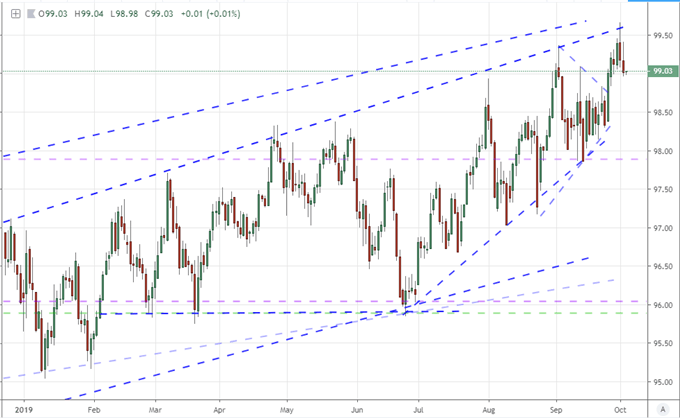 Another unique fundamental cue to keep abreast of is the proceedings on Brexit. UK Prime Minister Boris Johnson made known some of the details behind his plan to break the impasse with the EU at his part conference, suggesting there would be no checks at or near the Northern Ireland border, with the details due to come late Wednesday or early Thursday. While the UK's counterparts didn't have the full run down of what Johnson had in store, they were already voicing serious skepticism that the gap had been bridged. That could insinuate that any undo premium afforded the Sterling would be prone to unrelenting rebalance, but there isn't much of that priced into the market as it stands. I am more taken aback by the fact that implied volatility behind the Pound is off its recent highs. 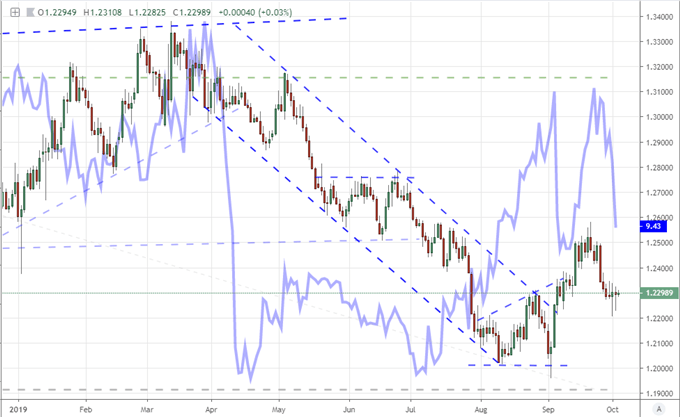 Another fundamental theme competing with trade wars and recessions is monetary policy - though in a very distant third spot. As fear rises that sentiment is faltering alongside the economy, demands for external support will rise in equal proportion. As it stands, the effectiveness of stimulus is coming under extreme pressure with the Fed's efforts being broadly written off. This past session, the probability of a third consecutive rate cut by the US central bank rose above 70 percent but that seemed to offer little optimism about appetite ahead. The RBA on the other hand spurred a sharp Aussie Dollar tumble even though it didn't follow its third rate cut in five meetings with vows of subsequent cuts. In general monetary policy is struggling to live up to its counterbalance persona. That is particularly favorable to alternative fiats - of which there are very few. With the Dollar, Euro, Pound, Yen and Aussie Dollar under pressure, there is one prominent alternative: gold. The precious metal clearly turned a head-and-shoulders breakdown into a reversal back along the fundamental lines. 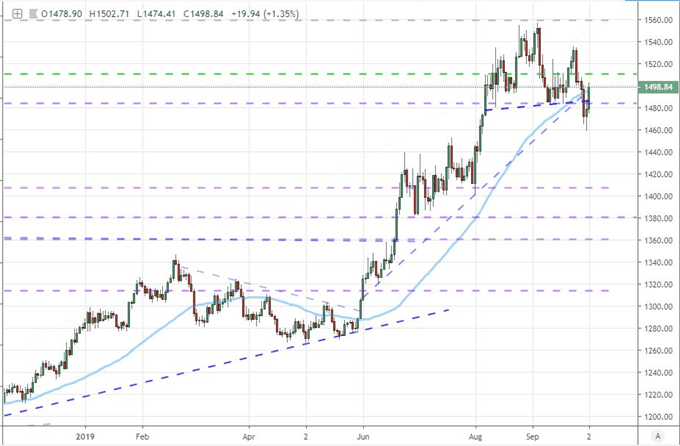