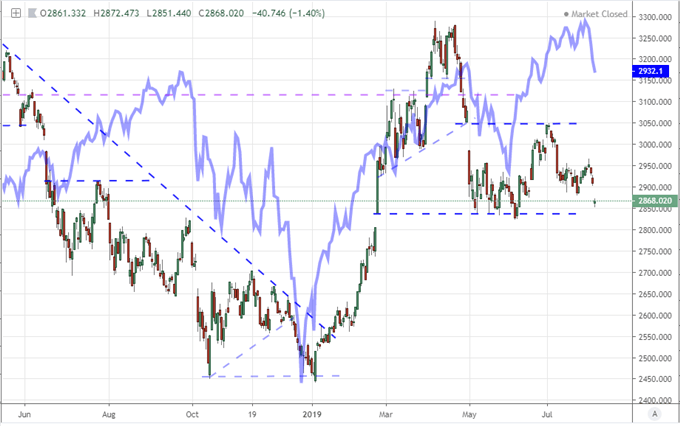 We head into the weekend with an overwhelming and unresolved fundamental threat: the dramatic escalation in the US-China trade war. Despite the remarkable occasion of a FOMC rate cut - the first in a decade and potentially of a cycle - the top event risk this past week was US President Donald Trump's tweet that the United States would slap a 10 percent tariff on the remaining $300 billion in Chinese imports not already under tax come September 1st. That news Thursday deftly sent risk assets scrambling and even the Dollar sliding. It is difficult to fully appreciate how deep an impact this event will eventually have on the global economy and financial system, but the scope of the risk is potentially profound. On Friday morning, the White House's chief economic adviser Larry Kudlow was on TV attempting to soften the blow of the President's announcement, but he fell well short of that objective. Kudlow said Trump was not concerned with the market's response to the news, but at least he also ruled out the option of currency intervention.

Chart of Shanghai Composite with S&P 500 in Blue (Daily)

Looking ahead to next week, trade wars will stand as the most pressing fundamental risk. As of Friday, China had announced its intention to retaliate against the United States' escalation, but the details were left for later. That response matters as China had hit its cap of like-for-like tariffs on US imports with the previous iteration, falling well short of matching the US when it expanded the list and increased the tax rate from 10 to 25 percent. It is possible that China could raise the tariff rate even higher, but that would likely be construed as disproportionate and lead to an immediate escalation. The more extreme options of allowing the USDCNH to rise above 7.00 or selling US Treasuries remains very unlikely. Such a move would make clear that the country is severely low on options as they resort to measures that can have painful local repercussions - stoking a sense of capital fight or sharply devalue their principal asset holding respectively. 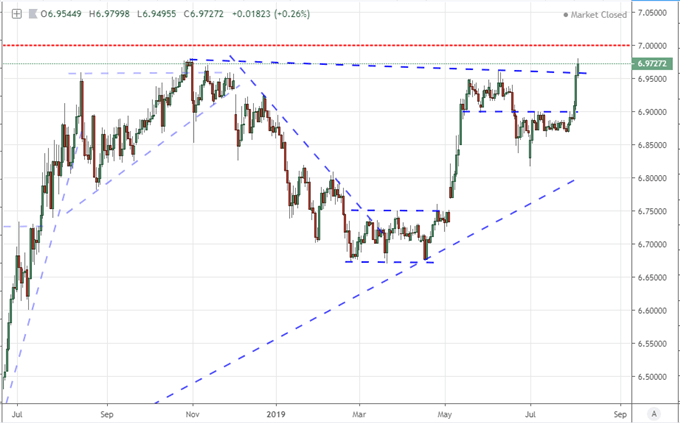 Outside of the dangerous tit-for-tat the US and Chinese are pursing, it is important to keep tabs on any signs of escalation of economic warfare among any other countries. The UK and EU standoff - more conveniently defined as a local Brexit issue - is a related theme that should not be overlooked. In Asia, Japan removed South Korea from its trusted 'white' export list and swift retaliation was promised. It remains, however, the US that represents the driving force of global trade fractures as President Trump used the opportunity to announce a beef export deal to Europe to joke about tariffs on BMWs and Mercedes. We should not forget that auto tariff determination Trump has yet to make as the impact can be extraordinary and the decision can be made rather flippantly to suit his political interests at the time.

US ISM Manufacturing with S&P 500 in Red (Monthly) 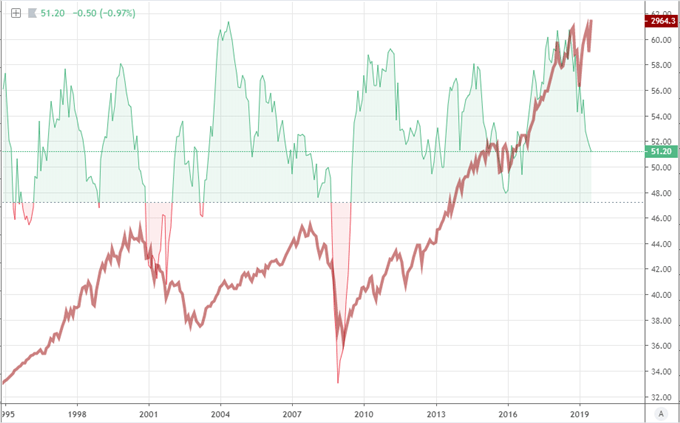 Trade wars is certainly a systemic influence, but its impact is not direct from White House decision to capital market adjustment. There is collateral fundamental damage to be registered. And, in some cases, that spillover can be just as disruptive as the initial fundamental shove. Monetary policy for example is directly in the path of this added pressure. Look to the Dollar. We could assign the Greenback's slide in the second half of this past week to the currency's involvement in the trade dispute, but it is more likely that the drop is the result of a sharp drop in interest rate expectations for the Fed. Chairman Jerome Powell made a painful effort to try and relay a sense that the rate cut this past week was necessary but that it was also more likely a 'mid-cycle adjustment'. When President Trump raised the stakes on the trade war, the market immediately raised anticipation of rate cuts with certainty of a September follow up cut and health speculation of two or three further quarter-percent reductions through year end. 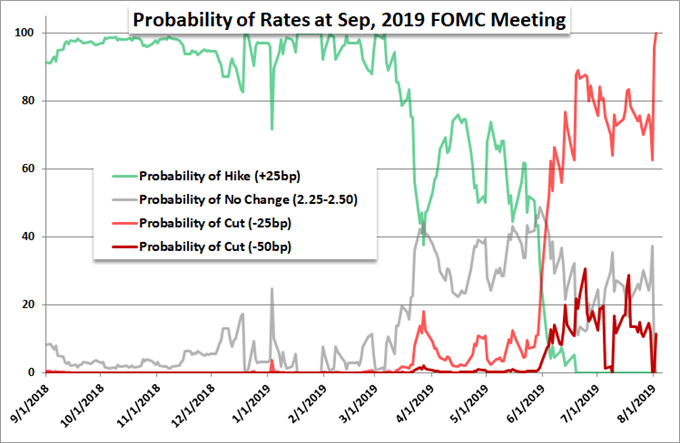 The US government's actions won't simply carry implications for US policymakers. The pressure heaped upon China will result in economic throttling of the world's second largest economy along with a reduction in its demand for raw materials. Both Australia and New Zealand are sizable contributors of those raw materials, and both happen to be due rate decisions over the coming week. The speculation of an RBA and RBNZ rate cut before year's end is high, but will they move early or wait for the domestic pain to show through before they act? Both AUDUSD and NZDUSD have slid markedly these past week. The former has dropped to a high profile trendline resistance while the former is down a record breaking 11 straight trading sessions to trade a decade low. A bounce is likely from AUDUSD, but how far will it go with the RBA looming in the foreground? 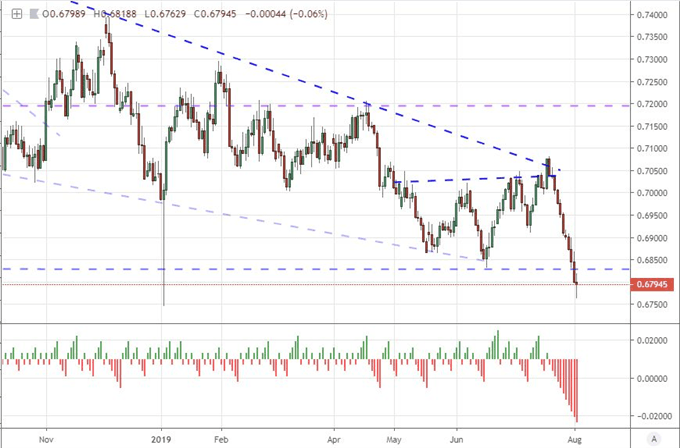 Another monetary policy segue to keep tabs on is the Swiss National Bank's (SNB) next steps. With Europe's policy authority readying its own return to rate cuts and investigating options for further accommodative easing, those periphery countries that are not part of the shared currency but tied closely to the region's trade are bearing the brunt of the pain. Switzerland is a particularly exposed economy. The SNB's primary monetary policy approach through the past decade has been an effort to merely keep pace with the deep-pocketed ECB. That has proven a fraught effort with severe volatility to the Franc. This past week EURCHF's gradual slide accelerated with a particular aggressive three-day tumble that drove the pair to the lowest levels in years. An effort at intervention in the near future is highly likely, but the effectiveness of the move is extremely dubious. The SNB can surely stoke volatility but turning the Franc on a permanent trajectory higher is an order of magnitude more difficult to achieve.

Chart of EURCHF and 3-Day Rate of Change (Daily) 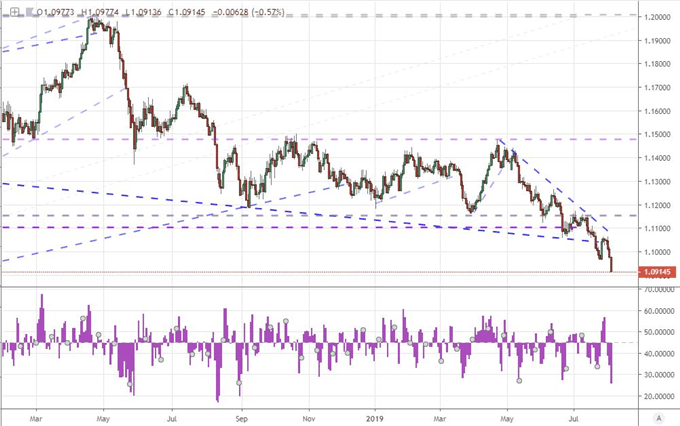 In addition to a monetary policy response to more intense trade wars, we further have to worry over the state of the global economic expansion. The acting IMF Managing Director made his ironic plea to work out a solution to trade wars Thursday just hours before President Trump announced he was further turning the screws. The economic fallout from trade efforts previously are already showing throw explicitly in business sentiment and manufacturing activity readings. The more evidence that the largest economies - or the system as a whole - is starting to retrench, the more aware the capital markets will be in their effort to unwind before the wave crashes. The market's new-favorite US 10-year to 3-month yield spread has dropped more squarely into negative territory this past week. Beware of recession cues.

Chart of US 10-Year to 3-Month Yield Spread (Daily) 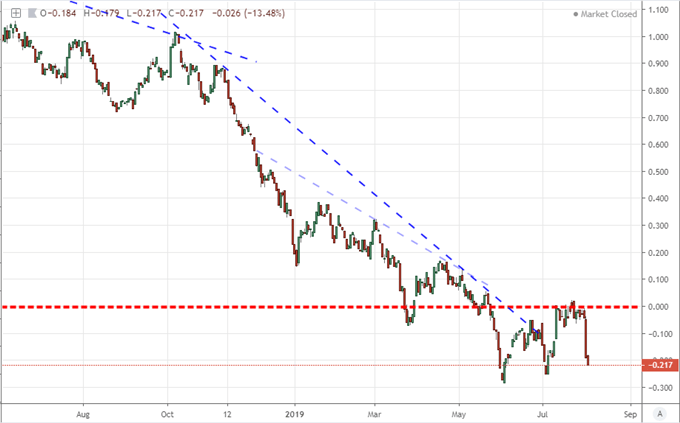 Outside the market's reflections on economic health, the docket will offer up service-sector activity readings for the largest developed and developing economies. We are due July reading from the US, Italy, UK, China, India, Brazil and others. Much of the immediate iterations of trade wars is registered through manufacturing. If the pain starts to spread to the service sector, the rot will be more systemic and difficult to overcome. For data that carries a little more weight that the standard update on monthly PMIs, I will be look to the official 2Q GDP updates from Japan and the UK, the third and fifth largest economies respectively. The weight of the data is significant, but the UK may struggle with this indicator as it did with the BOE's guidance given the distraction of the Brexit situation. After Prime Minister Boris Johnson's party lost seats in a special election, trimming his working majority to a single seat, the probability of a general election has grown acutely.

Chart of GBPJPY and 7-Day Rate of Change (Daily) 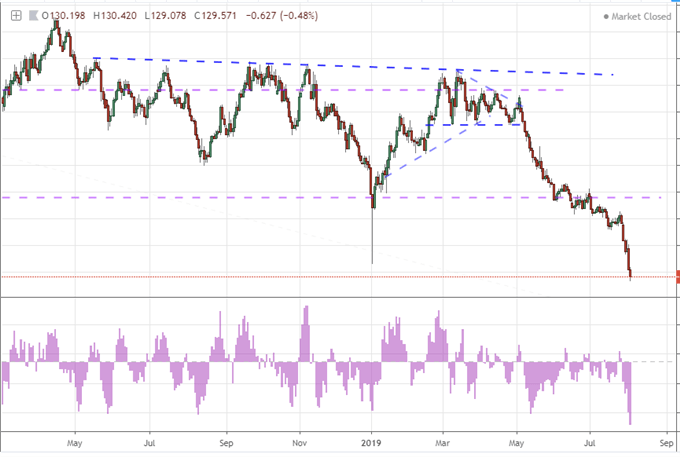 If Global Risk Trends Crumple to Trade Wars, It's Game Over

Ultimately, the most pressing risk from trade wars would be a collapse in speculative resolve. There are additional maneuvers policy officials can make to forgo the inevitable pain from a crunch in trade and policy officials can trumpet the effectiveness of their diminished options for some time. Yet, the influence these efforts can exert falls away immediately should sentiment render the efforts ineffective. If risk aversion capsize the financial markets, no moderate improvement in traditional data lines will staunch the bleeding. We therefore need to keep an extremely vigilant eye on the state of investor sentiment. 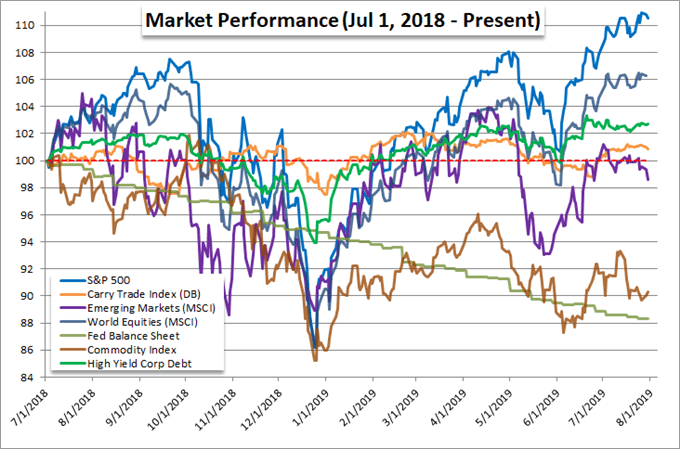 My preferred measure of risk trends is the correlation across capital market benchmarks that are otherwise unrelated: equities, carry, emerging markets, commodities, etc. Yet, if there were a useful single-facet measure worthy of our attention, it would be US indices. I'm particularly fond of the S&P 500 given its breadth and the exceptional amount of trade behind it via deviates. This benchmark took a tumble through the second half of this past week first with the Fed suggesting it was not going to lend its full support and then when the realization dawned that the trade war would override anything the central bank could offer. It is still early days in a pullback, but this particular milestone carries far more influence that most other active benchmarks that the speculative ranks follow. If we have a repeat of the tumble for the fourth quarter, I think the breadth of influence will stretch wider and that the market will not stop just shy of the technical bear market the second go around. We discuss all of this in this weekend Trading Video. 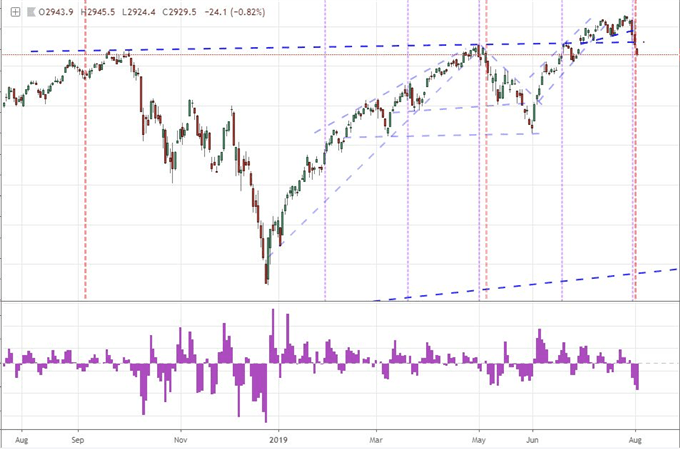