Is the US an Economic Oasis in a Global Slowdown?

If we were to take stock of the global winds, it would seem that the somewhat contradictory views of US President Donald Trump are proving correct. On one point, his assessment that other currencies are being proactively devalued is suspect, but his unrelenting pressure on the Fed to retaliate seems like it will inevitably catch traction thanks to the pressure the market is bringing to bear on the central bank. The trouble aside this policy relief would suggest aside, Trump has also suggested that the US economy is doing exceedingly well - particularly against its largest counterparts. As disjointed as that may be, recent data seems to support that claim as well, at least through a surface level interpretation of the data on hand.

Following the IMF's updated growth forecasts on Tuesday - which showed the global GDP forecast for 2019 dipped 0.1 percentage points to 3.2 percent while the United States' own outlook was increased 0.3 percentage points to 1.6 percent - the PMIs offered up a picture of the key regions for the most most recent month. Reflecting the same divergence, the US composite reading ticked higher from 51.5 to 51.6 (notably with manufacturing dropping to a reading of stagnation). In contrast, the Euro-area's composite dropped -0.7 ppt to 51.5 while Japan's may have nudged higher (0.3 ppt) but held firmly is contractionary territory with a 49.6 reading. Typically, the forthcoming 2Q US GDP reading would be the most market moving economic update of the bunch, but the market seems to be putting a premium on the the forecast element, especially as performance divergences in the twilight of the stretched risk environment.

Chart of Dow Index and US 12-Month Rolling GDP (Monthly) 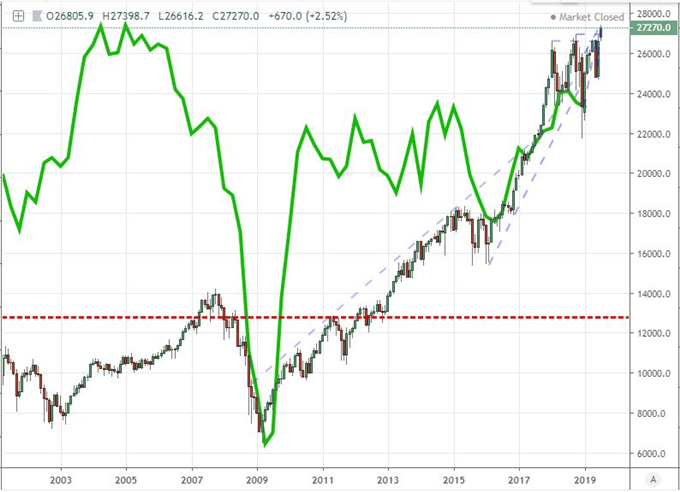 With this contrast in growth readings, the fundamental gap may be catching traction but the relative performance of US assets doesn't seem to be enjoying a linear response. Where the Dollar managed a meaningful resurgence Tuesday on the IMF's projections, the favorable PMI print rendered little appetite for the Greenback. It would not be unreasonable to expect the same hesitancy with Friday's US GDP reading with its peers not due their own updates until subsequent weeks. Further, relative growth only goes so far when the rest of the market is barely keeping its head above water. Following this line of speculative appetite, demand for US assets versus rest of world similarly showed little ability to capitalize with the Dow's performance relative to the VEU All World ex-US ETF offered no progress. 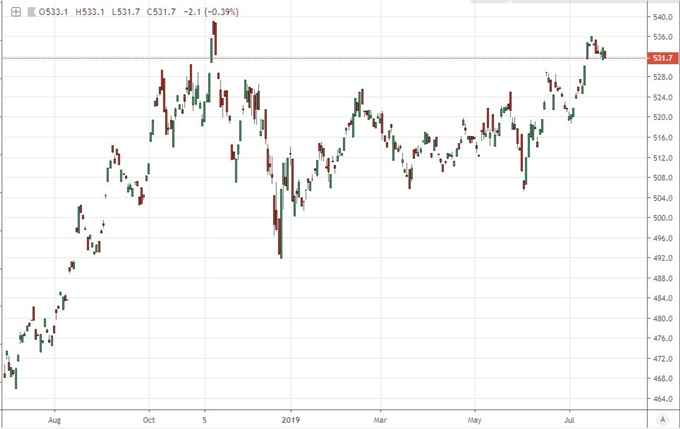 Monetary Policy Will Dominant the Horizon, At Least Briefly

Looking out over the next 24 hours - and through the next week - a shift in focus is due. Though general readings of growth are still very important, the event risk supports heavier influence to be found through monetary policy. With the currency session, we are due the European Central Bank's (ECB) rate decision. The world's second largest central bank is not expected to alter its current policy mix, but that doesn't mean a hold will be completely overlooked. Despite the general anticipation of a measured pace from this group, swaps show the market is still pricing in a healthy probability (just shy of 40 percent) of a 10 basis point cut at this meeting. Through year's end the there is vigorous debate over how aggressive the central bank will be with its easing, but the outlook spreads from 0.1 and 0.4 percentage points worth of cuts. 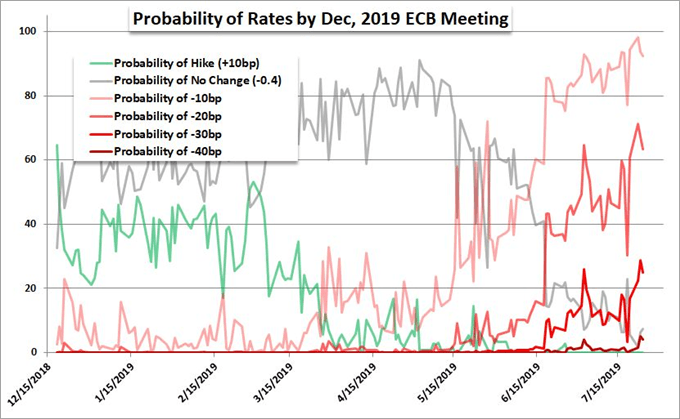 Beyond what the ECB does here and now, considerable attention must be afforded to their guidance moving forward. While a cut or revival of QE is unlikely at this month's meeting, it is still seen as a very high probability this year. Circumstances are such that economic struggle and tepid inflation offers up clear leeway to loosen the reins. Further, rhetoric from the bank has clearly supported the notion of a further dovish shift when it the open QE program was only capped this past December and a TLTRO (targeted long-term refinancing operation) was put into play earlier this year. Chose your outlet for this change of standings wisely. Though EURUSD may look primed at a three-month range low just above 1.1100, the anticipation of Friday's US GDP and Wednesday's FOMC decision may ultimately make for a deflated follow through. 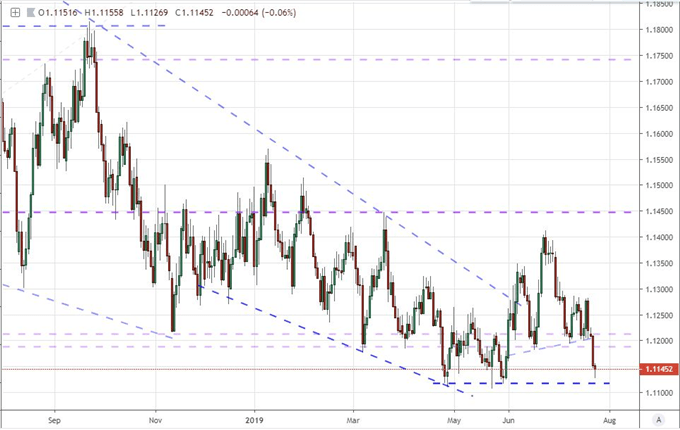 If we were looking for the biggest surprise between fundamental development and market response this past session, it would have to be a title given to the Sterling. The British Pound, on an equally-weighted basis, posted its biggest single-day rally since May 3rd. Yet, is this a reliable turning point for a currency that has dropped steadily for nearly three straight months? The jump followed the transfer of power over the Conservative Party and United Kingdom over to Boris Johnson. Some clarity this necessary decision before both the UK and EU negotiators can return to the table in earnest is something of a relief. That said, the uncertainty of who is directing the ship is readily replaced with the uncertainty derived from Johnson's willingness to withdrawal without an economic plan in place.

Chart of Pound Index and 1-Day Rate of Change (Daily) 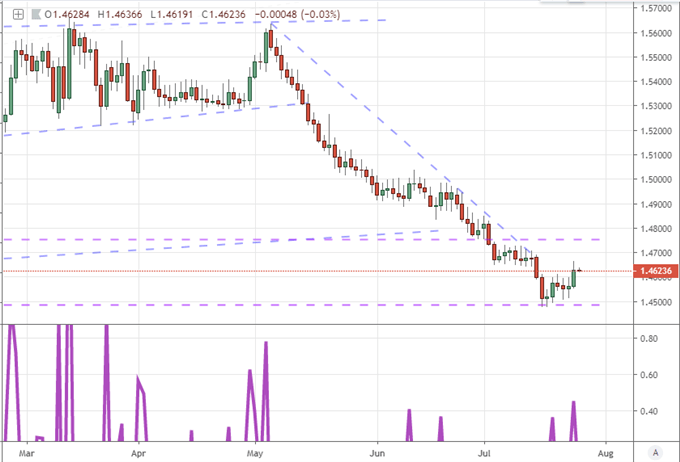 The Sterling jumped across the board this past session further despite the news that the new PM has replaced 18 of the 29 Cabinet ministers with materially more aggressive Brexit voices. Raising the probability of a 'no deal' outcome is a serious risk so says the IMF, Bank of England, global central banks, even the UK government itself. That said, I look upon a move like the EURGBP head-and-shoulders pattern with a deep sense of skepticism. Between a questionable lift for the Pound and the uncertainty with the ECB for the Euro, there is far more risk here than potential. 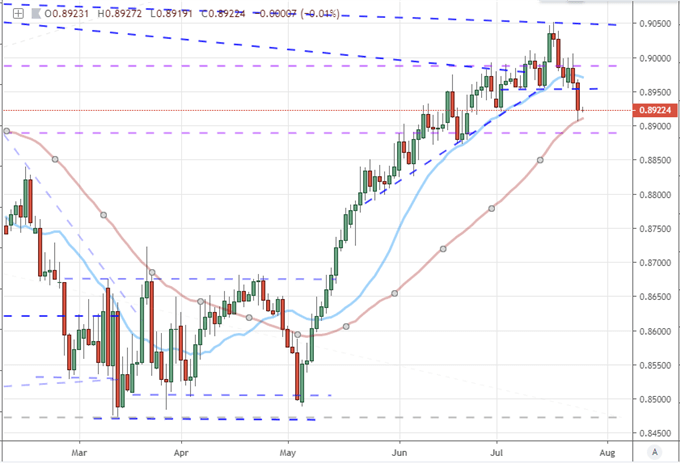 Trade Wars and Earnings Are Still Active in the Background

Outside of the influence of growth forecasts and monetary policy, the third principal theme of late - trade wars - was relegated to ancillary readings. Reports that the US and Chinese trade negotiators are meeting in person is as lower a boundary as can be set. The overtures between the US and Europe are of greater interest and concern. If the ECB steps up its already-aggressive easing policy, it would very likely prompt the US President to again cry foul. Meanwhile, we cannot forget about the White House review of the Commerce Department's findings on auto tariffs with a time frame out until mid-November nor EU leaders warning their willingness and preparation to retaliate against the US should the country slap aggressive tariffs against the regional character - yet another EURUSD complication.

Meanwhile, earnings will contribute to the trade conversation. This past session's Ford and Boeing updates would reflect upon the health of trade. The auto manufacturer is dealing with artificial foreign demand curbs but it is lingering threat of a full-scale disruption through auto tariffs that should truly concern us. In addition to trade wars, growth will be a theme these corporate reports will reflect upon particularly through the likes of Caterpillar (CAT). Further, speculative heft should not be overlooked with the likes of Amazon and Google ahead, even though Facebook after-hours didn't generate the same level of friction as Netflix did a week ago. We discuss all of this and more in today's Trading Video. 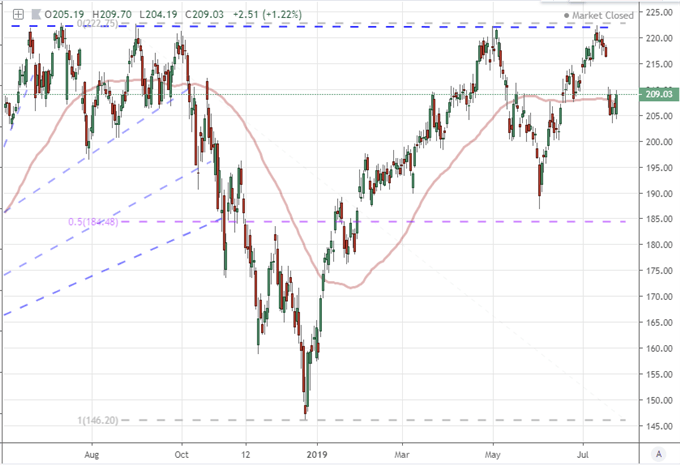