We have seen considerable changes in the fundamental undercurrent of the financial system these past months. From a (perceived) Fed policy course reversal to the G-20's (perceived) relief between the US and China on trade, and then the unmistakable reminder of economic trouble in PMI figures to start this week; there has been plenty to both tease speculation and stoke fear. We continue to take in meaningful updates on these systemic fronts, but the scope of the news doesn't seem to match the restraint that is threatened by the liquidity drain on Thursday.

We can already see the tempering effects of thinning market depth as we march inevitably towards the Independence Day holiday. The S&P 500 having started off this week with an incredible gap to a record high with Monday's open has since lost all traction. Tuesday's trading session would not overtake either the low or high of the previous session - what is considered an 'inside day'. A similar cap to progress has shown through across global indices, emerging markets and the more deeply discounted Yen crosses (carry trade). Commodities and sovereign bond yields, which hold a greater deference to growth as a facet to sentiment, have reengaged their bearish course. Volatility measures in the meantime are dropping back towards multi-month lows even though their standard forecast period is 30 days. 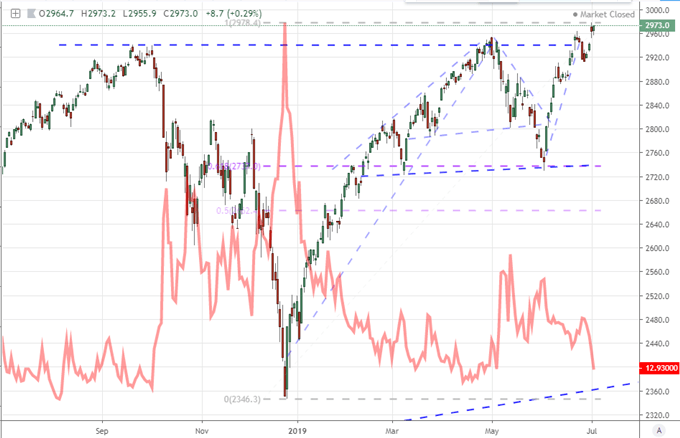 In fundamental terms, the past session managed to tap the previously mentioned, top three themes. For trade wars, we haven't seen any further developments between US and China, but Huawei's founder has said President Trump's decision to lift the ban on US companies selling products to the Chinese telecom would have little impact on its performance. Meanwhile, the US Trade Representative's office published a list of $4 billion in additional possible tariffs against the EU - to add to April's $21 billion - in the ongoing spat between Boeing and Airbus. For monetary policy, a top Fed hawk (Mester) urged holding off on hikes as they could cause imbalances if pursued to early; but she is definitely in the minority. Then there is GDP with measures like the NYC business activity forecast which hit a 10-year low Tuesday.

With the US market's offline for Thursday and government agencies similarly closed, the data that would normally fall on that day is either pushed forwards or backwards. Wednesday's docket is unmistakably heavy. Trimming it down to the top three release on tap, number three is the ADP private payrolls report for June. This is a lead in to Friday's nonfarm payrolls for the same month. This indicator itself however is not known to significant move the Dollar or capital markets. Second place goes to the May trade balance. This is not often a big market mover in and of itself, but the implications of trade wars and the connection to obviously flagging growth as well as motivation for the Fed to act are lines that are too readily drawn nowadays in the mainstream. 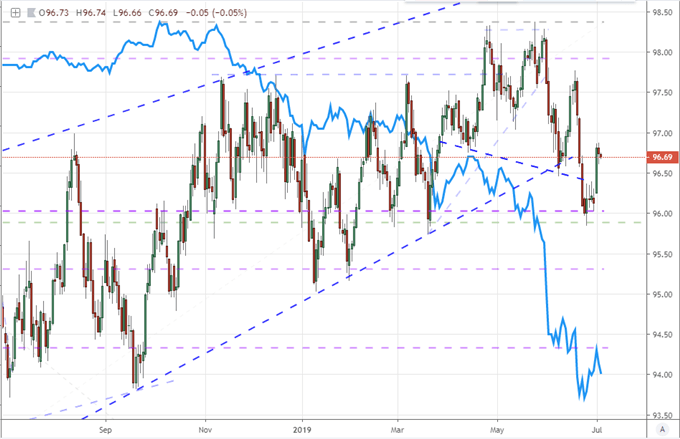 Top event risk for Wednesday for the Greenback is the ISM non-manufacturing survey - essentially service sector activity. Much was made of the manufacturing equivalent to start the week, and rightfully so given how poor its release was. However, in terms of influence, the United States is far and away driven by its service-based economy. Despite the late hour of liquidity, if this particular reading were to offer a significant decline through the past month, it could raise fears of stalled growth and perhaps muster enough fear to override the natural lethargy that sets in around this time.

If the market doesn't cue up anything with extreme inference, the focus will then turn to anticipation for Friday's run. While there are a few readings of merit, it is clearly the June employment report that should earn the market's undivided attention. Given the assumptions of an impending rate cut from the Fed this month and the awareness of unflattering growth readings, this favorite indicator could present serious leverage either way.

As we see most assets settle into a comfortable holiday rhythm, there are a select few assets that seem to be ignoring the siren call. One such market is gold's exceptional volatility this week. The precious metal posted its sharpest single-day loss since November 2016 on Monday, to threaten the impressive bull run we've seen develop these past months. However, the retreat wouldn't surpass a Fib and former resistance, instead using it as a spring board. What resulted was the biggest single-day rally since October 11th. There is certainly fundamental background to justify the general bull trend, but this recent swell of activity is likely volatility catering to more volatility. It will struggle to keep this tempo - but not necessarily bearing.

Chart of Gold and Rate of Change (Daily) 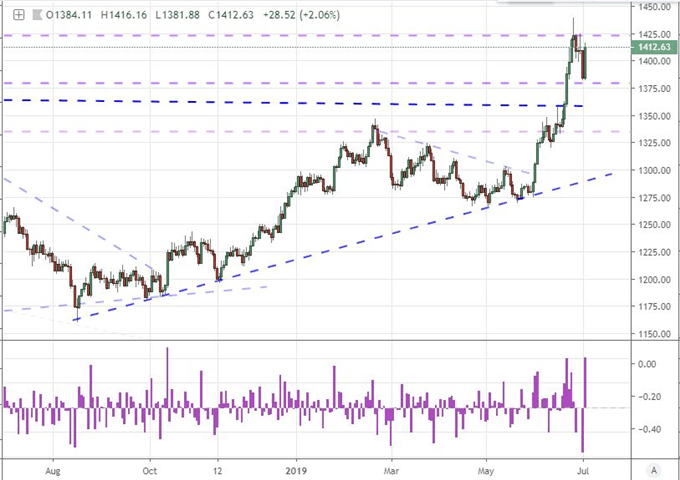 In the FX markets, the pair with most provocative backdrop for volatility through the second half of this week is undoubtedly USDCAD. The technicals are themselves interesting. The drop we've witnessed these past weeks has built up remarkable steam and now spot is stretched significantly below the 200-day moving average with a confluence of support to be spotted around 1.3050/00. Today, we are looking at a range of updates, but the simultaneous release of US and Canadian trade statistics can draw considerable interest. That said, if we are looking to history of sheer market impact that would have to go to the tandem release of government jobs figures from both on Friday. We discuss all of this and more in today's Trading Video. 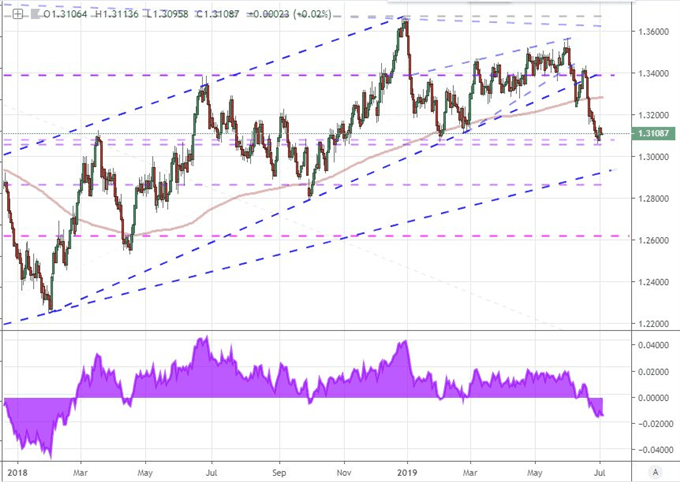