An S&P 500 Record High Not Worth Trusting, A Dollar Recovery More Likely to Stall

We start this new week, month and quarter with a meaningful fundamental charge. The two-day G-20 summit wrapped on Saturday, but this past session was the first time we would actually be able to respond to its outcome - as conflicted as it was. From US President Trump's perspective, the agreement to avoid escalation in trade war tariffs between himself and Chinese President Xi Jinping was a success. The markets may struggle to draw the same degree of optimism from this outcome. If anything, the gathering of world leaders was an armistice between the world's two largest economies. All the onerous tariffs put into place by both sides over the past months are still dragging down economic activity. Vowing to continue negotiations is practically the lowest possible commitment that can be made by these peers without faltering to a state of escalation. 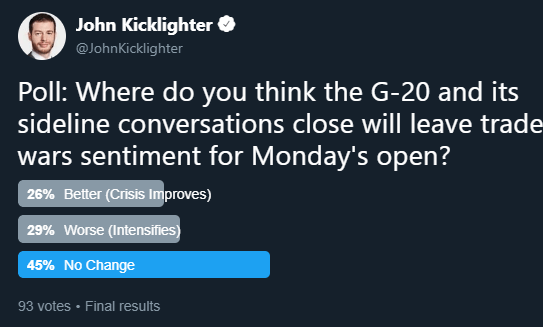 Despite the lack of resolution in risk trends from this past weekend's meeting, there was an unmistakable jump in speculative appetite through the opening hours of Monday. The rally wasn't a broad conviction affair. There was a notable lack of liftoff from certain asset classes including commodities - a particular market with as much association to growth as to speculative appetite - and there was an unmistakable pacing difference between even related assets. Nevertheless, the S&P 500 (one of my favorite, imperfect measures of risk trends) posted one of its biggest gaps higher on an open in some time to overtake the previously established record high. It is difficult ot find a similar situation of such a jump at this bullish extreme in recent history. That leads me to more caution than blind enthusiasm on sentiment trends. 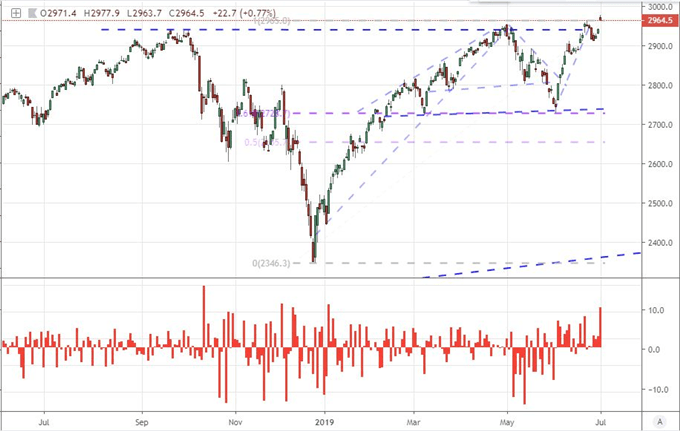 Adding a further complication to this formula, the over-indulgent interpretation of progress from the hold between the US and Chinese teams has a subsequent moderating influence on Fed rate expectations. Following the groups rate decision last month, a forecast for no changes in 2019 was read as a willingness to ramp up accommodation should growth go further off the rails. The sudden intensity of rate cut expectation at the beginning of June aligned - not by consequence - to the rally in the S&P 500 and drop from the Dollar index. Yet, if trade wars are not deepening, will the US central bank really be that pressed to provide such aggressive relief? Looking to Fed Funds rate futures, the probability of three 25-basis point rate cuts has cooled after this week's start. There is still a generous two cuts priced in fully but that third move finds the market disputing its merits. 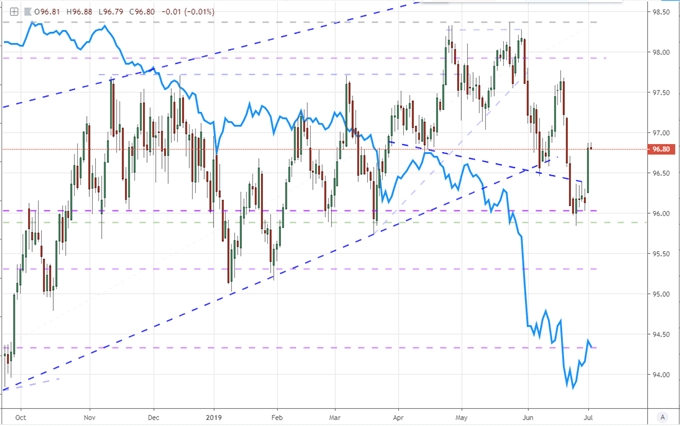 An Appreciation of Growth and Its Definitively Slowing

Trade wars wasn't the only fundamental tune playing to start this week. We were also taking in a troubling assessment of global growth. For a more comprehensive view of the global economy's forecast, the Bank for International Settlements (BIS) issued its forecast for the world's economy. There were the regular warnings for external risks but there was also a tangible reflection for the struggle in growth. For a comprehensive view, the Bank for International Settlements (BIS) annual economic outlook offered the sense of caution we have come to expect from the generally pessimistic group. However, the point that stood out distinctly in my assessment was the warning that growth could not be sustained through monetary policy support this time around. 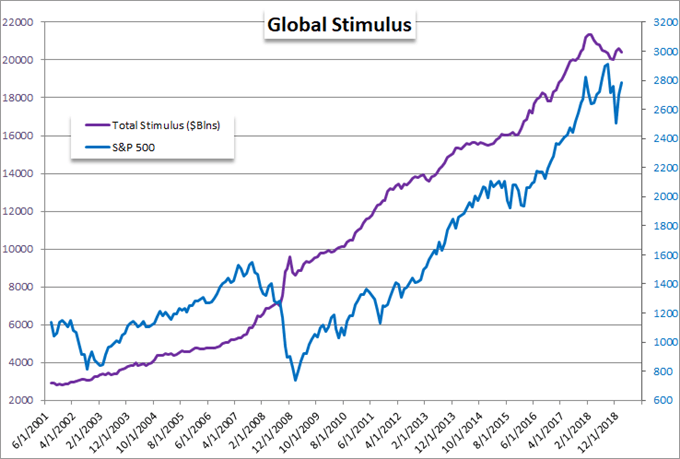 The more data-driven assessment of economic health was the overview of activity reports across the globe for the month of June - the final month of the second quarter and thereby clear bait for 2Q GDP interpretations. The PMIs - principally for manufacturing - were almost universally poor. The Chinese government and private (Caixin) manufacturing reports offered a contraction (any reading below 50.0) for the important economic engine. Where the Japanese reading was a secondary update, the Australian figures were new and an unexpected drop below the 50-mark in their own right. European figures were generally 'final' figures, but the Italian readings were an unflattering first round and the UK manufacturing sector was facing its worst performance in six years. Through North America, the Markit's assessment of US factory activity was a modest upgrade from the initial post but the ISM's version indicated the weakest showing since October 2016. Even Mexico's manufacturing update was distinctly poor with the worst showing in the series' relatively brief history - back to 2011.

Working Around the Known Throttling of Liquidity for Trades

With trade wars and general GDP already under scrutiny to start this week, it may seem like we are in a good position to find a swell of volatility in the week ahead. Yet, the reality is that we are facing a well-known liquidity curb. We are already seeing a restriction to trends arising from a structural issue between rampant speculation disconnected from practical fundamentals. That is only compounded by the assumptions afforded to the Summer doldrums which finds July one of the more restricted months for volatility via the VIX and turnover through S&P 500 volume. Putting even finer a point of the matter, this week holds the US Independence Day holiday which is a well-known drain on not just the US markets. This is simply far too much to override through the basis of a coasting performance alone. 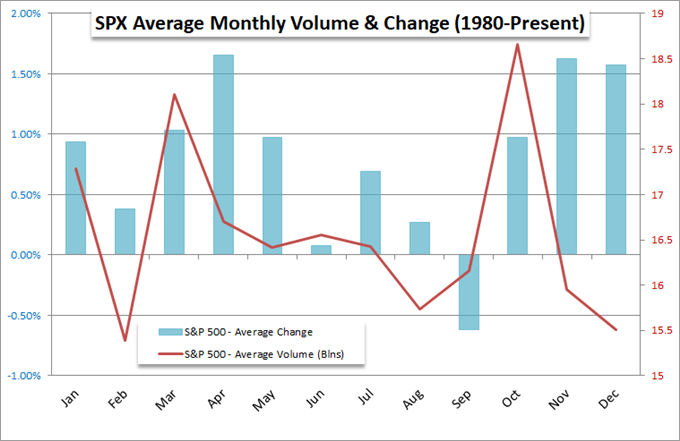 If there is an inevitable drain to occur this week, then the prospect of robust moves is severely limited - whether the outlook is bullish or bearish for risk views. For the S&P 500's gap to a record high, it would seem that the circumstances were most suiting as low volatility seems to favor an inverse correlation to capital market performance as speculative appetite feels reassured that the foundation will not drop out. Yet, to extend a venture into record territory is not the same as a coast to recovery lost ground in a well-traversed range. Not even rest-of-world equities, which are in that sort of position, are likely to find so favorable a tail wind. If anything, panic can override greed, but the frequency of fear necessary to hit in order to start an avalanche is very difficult to reach.

Looking for markets that are in a position to simply cover a well-established range is a more reasonable pursuit given the environment, but even then we should keep a sense of practicality as to what we can expect for progress. USDJPY's reversal to start this week in technical and fundamental terms was an outlet that I was already looking at before the move registered; but now that we are here, USDCHF may be a more interesting representative. While it still holds a risk-connection, the Swiss franc is less dependent on its pace being set by sentiment. Add to that an observation that the currency is still stretched from its run these past weeks and the news that Switzerland was losing some access to the EU markets, and there is something more profound to consider. And, then there is the Australian Dollar, which was prepared for a rate cut from the RBA Tuesday morning. While perhaps not leveraged enough to override conflicts via AUDUSD or AUDJPY, there are other crosses to consider. We discuss all of this and more in today's Trading Video.

Chart of USDCHF and the 1-Day Rate of Change (Daily) 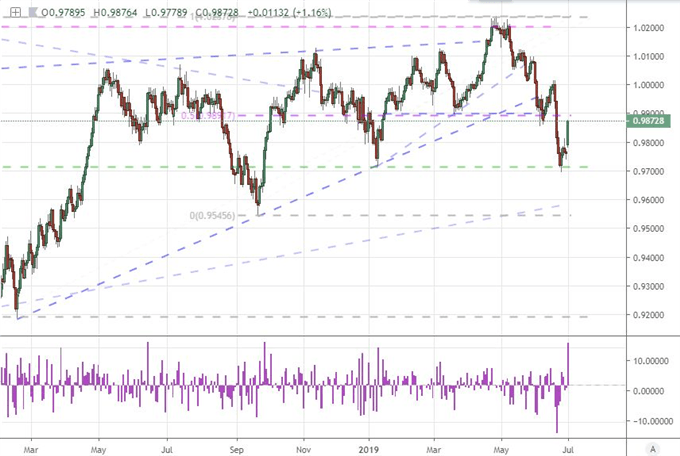