S&P 500 Shaken to Start the Week, A Run of Rate Decisions Begins

Sentiment seemed to slow and stall this past week following two months of persistent and productive rebound that erased much of the losses suffered through the fourth quarter of 2018 - at least that is for US indices. The S&P 500 and Dow carved aggressive rising wedges that earned the latter a remarkable 9 consecutive week advance, the longest such climb since May 1995. That tally was broken this past week in a rather lackluster slip that was borne of the congestion that aligns to the previous 'shoulder' of large head-and-shoulders patterns. That uncertainty was showed some serious signs of doubts to start this trading week. The selling pressure through Monday's session was heavy. And, even though there was a bounce through the second half of the day, the reminder that a complacent bid is not a certainty seems to have shaken the speculative rank.

Throughout the young recovery in 2019, there question of 'what is inspiring bulls' has dogged those willing to consider the question seriously. Growth forecasts have dropped, warnings over financial conditions and preparations have arisen through numerous channels, and a complex of direct fundamental risks have expanded over the past year. Nevertheless, an underlying sense of complacency has encouraged opportunists to seek out favorable headlines. One such point of speculation was the eventual end of the US-China trade war. That favorable turn of events is already underway with President Trump's declaration over a week ago that he would postpone the tariff escalation deadline.

As of the start of this week, sources have leaked expectations that China is willing to move on structural issues the US has been troubled by like intellectual property sharing. And yet, the markets are not finding any renewed sense of enthusiasm. Averting a crisis is not the same thing as fostering an environment of new opportunity. If the 'relief rally' mentality is fading away, we are left with far less favorable conditions like slowing growth measures which will be hit upon by monthly PMIs due today or monetary policy as an impediment which will intensify notably starting Tuesday. What I look for in market activity to inform a sense of market sentiment is correlation across assets that are otherwise independent. Those measures that I follow more regularly were all under pressure Monday. 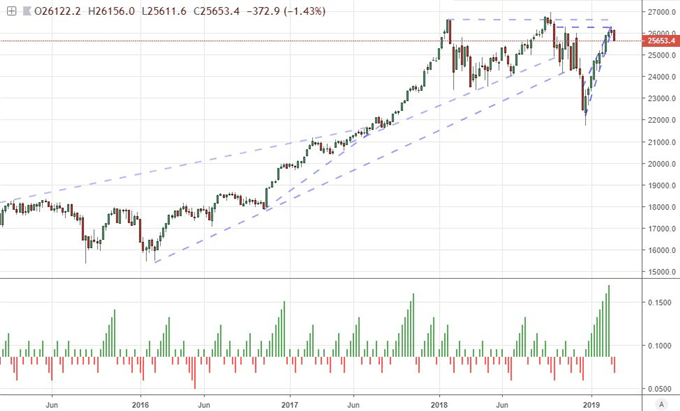 For scheduled event risk over the next 24 hours, there are a few currencies with a few noteworthy highlights. One of the top listings and a run of data throughout the week goes to the Australian Dollar. The currency has already absorbed a disappointing 4Q corporate profit release along with inflation expectations and building permits. The combination did little to truly motivate the currency however, likely because attention is being centered upon what is ahead. Due today is the Reserve Bank of Australia's (RBA) rate decision. This central bank is considered the most likely to realize a rate cut in 2019 according to overnight swaps. That inherently leverages speculation around the authority's intended course. What's more, the interest in AUD doesn't stop after the policy update as we are expecting 4Q GDP numbers the day after. There are further events including remarks from Governor Lowe and a distinct connection to China which is due for serious fundamentals waves this week. As over-loaded as the currency is this week, that is likely to do more to destabilize and sideline a trend from the Aussie Dollar than it is to facilitate a meaningful trend.

Another currency dealing with multiple lines of fundamental influence over the next 24 hours is the British Pound. This past session offered up a construction activity (PMI) report that unexpectedly flipped into contractionary territory (anything below 50) with a 49.5 for February. Ahead, the 'composite' and service sector PMIs are due alongside the Financial Policy Committee's minutes, yet these indicators are unlikely to draw attention away from the open-ended threat of Brexit. Prime Minister May's next opportunity to gain support for her proposal is a weak away, and Parliament seems to be set on course to render the same verdict - which would necessitate a vote two days later on whether to request an extension from the European Union. Last week's breakout attempt by the Sterling looks just as difficult to achieve now as it did during the attempt. The question is whether that seeds the opportunity for reversal. 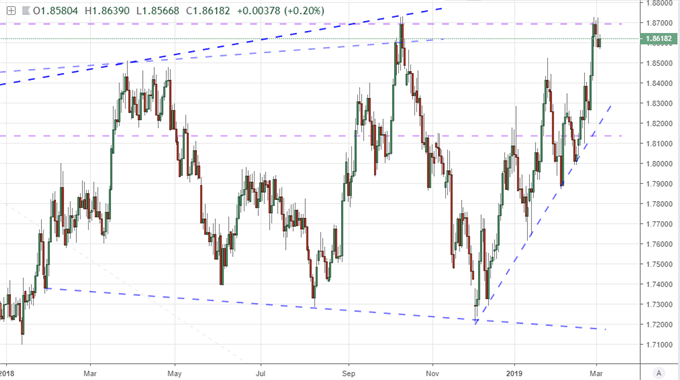 Taking stock of the macroeconomic docket, there is an array of additional event risk for which we should keep tabs, but the potential for strong market response is an even taller order. The Dollar was even further unsettled this past weekend when President Trump revived his critique of the Federal Reserve's policy course and his lament over the strength of the currency. He said that while he likes a strong currency, it shouldn't be so strong as to harm business. Ahead, US event risk will touch on a few important economic highlights: the ISM service sector report and new home sales. The former accounts for two-thirds of output in the United States and the latter is a well-known pressure point for global financial markets. Still, I would not expect heavy Dollar movement unless some unexpected fundamental charge hits.

I'd put the same skepticism of a robust move on the Euro as its scheduled event risk is even less prominent. While Eurozone retail sales is certainly an economic update, it will not dent the anticipation circling the European Central Bank (ECB) rate decision on Thursday. The speculation built into an 'eventual' hike from this dovish policy group has set the market's focus unreasonably high and the grouphas attempted to talk the market down from its lofty expectations. They will likely need to make more explicit their intentions this week which will not bode well for a currency still holding onto 2017 premium.

Outside of the relative strength equation for the FX market, the preferred alternative to traditional fiat, gold, continues to slide. The metal has suffered its worst four-day dive through Monday since the tumble in May 2017 - and it is very close to overtaking that decline which would bring November 16, 2016 into view. This weakness does not go away when we diversify the pricing of the metal into more of the majors - meaning it is not simply a Dollar reflection. So then, what does it mean? We discuss all of this and more in today's Trading Video.

Chart of Gold and the Four-Day Rate of Change (Daily) 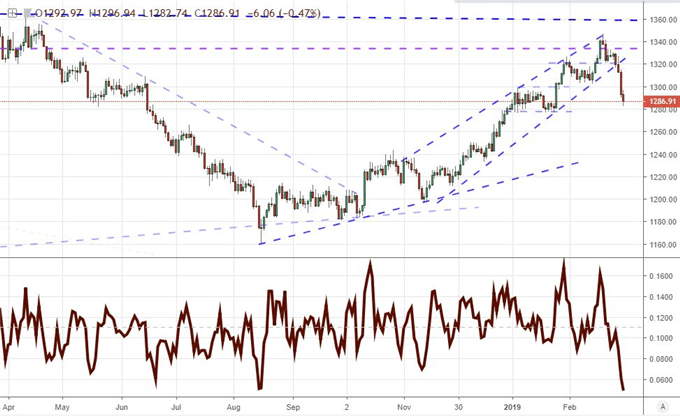