How long will the markets be drawn into the game of rumor and reaction surrounding trade wars before speculators become resistant to future updates - whether denied or confirmed? This past session, we registered our third leak on the status of US-China trade discussions in less than a week. If you recall, this past Thursday it was reported that President Trump was considering relieving tariffs on China to help stoke equities and Friday headlines relayed suggestions that China offered to dramatically increase purchases of US goods to help close the trade gap. Both earned a bullish reaction from the capital markets and each was rebuffed in time (the former more quickly and enthusiastically). The breaking news this past session was novel in that it came with a bearish perspective in suggesting that the US was rejecting preparatory talks with China owing to a lack of progress on issues like intellectual property. The White House's chief economic adviser Larry Kudlow offered a weak rejection of the reporting, but the market would still feel the sting. Meanwhile, Kudlow would also weigh in on the US government shutdown with the overly optimist assessment that US growth will snap back immediately after the closure ends. In a world where economic activity is fading, that is borderline fantasy. Sentiment is good evidence of the permanent damage that is being done. An interesting survey from PwC of CEOs reflected that 30 percent now expect a decline in the economy in 2019 from only 5 percent previously. It further showed that the US suffering the greatest drain on enthusiasm and is at risk of losing its number-one spot as an investment target. 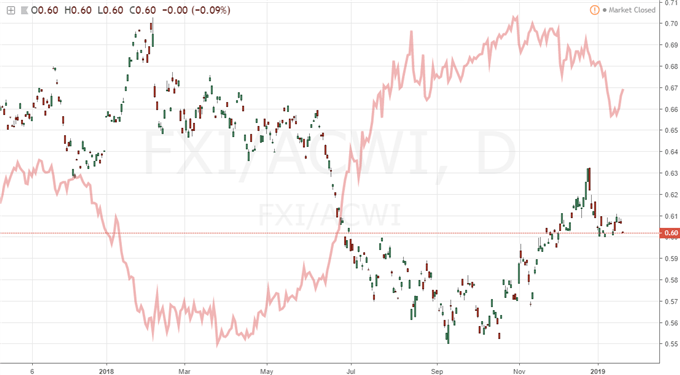 A Return of Liquidity Puts the Bears Back on Pace

We are not lacking for potential fundamental catalysts to get the markets moving; but to start this week, the lack of liquidity certainly did stunt the ability to drum up a move based on sentiment. That was rectified Tuesday when US markets were back online following the Martin Luther King Jr holiday. With market depth filling back out, global speculators seized on the general turn in data and sentiment since the weekend. With Chinese GDP, the ongoing US shutdown, trade war rumors and sentiment surveys consistently flagging; there was enough data to justify market participants' general concerns. The S&P 500, Dow and Nasdaq 100 all posted a retreat through Tuesday's session. It is still 'countertrend' relative to the past three weeks, but it will trip bulls up. As of Friday, the S&P 500 had cleared the midpoint of its October-to-December tumble to bolster the bulls' confidence. Yet, technical milestones do not replace an environment that reflects conviction and trend. Slipping back below that otherwise noteworthy milestone reminds us of that fact. Underlying risk trends remain one of the most prominent guiding lights for markets moving forward, but the environmental cues remain my top concerns. Volatility (VIX) rose in response to Tuesday's session, but it was the complacency (volatility of volatility or VVIX) that registered as the inevitable slip. Further, the deeper discount and more restrained recovery efforts for foreign shares and emerging markets relative to stoic assets like US equities should remind us to take a more comprehensive evaluation of our conditions. Be mindful of the bearing and intensity of sentiment, but don't presume it will readily find a clear road. 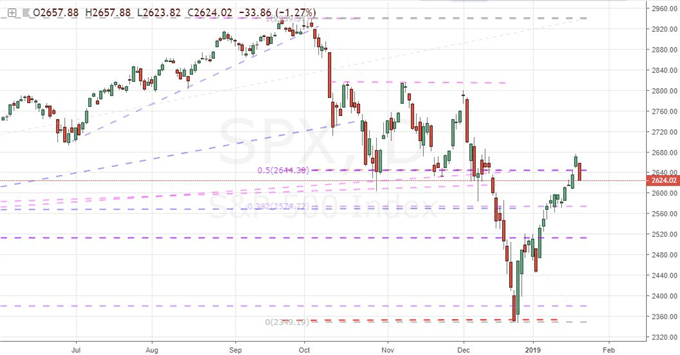 It may not seem obvious, but there is a significant sensitivity to risk trends for EURUSD. Though comprised of the two most liquid currencies in the market, a strong view of speculative appetite will exploit one of the most disparate yield differentials among the majors - as well as one of the most heavily-debated rate path forecasts. Further, in intense risk aversion, complacent financial issues are likely to come to the fore with the Dollar reverting to a very familiar 'absolute haven' role. Yet, until we see that definitive shift in sentiment, it is likely that the pairing will continue to reflect the lack of clarity that we have had to deal with for the past months. In fact, the 60-day historical range for the pair is holding at the lowest span of price action that we have seen for the benchmark all the way back to the summer of 2014 - a period of absolute quiet and very challenging for those in the FX markets at the time. In the meantime, more distinct issues are starting to influence the Dollar and Euro individually. From the US, a standard data release actually hit the wires outside the government shutdown's black hole. Existing home sales plunged 6.4 percent for the largest drop in years. More market-worthy though were reports that the White House is preparing to fill one of the vacancies on the Fed's Board of Governors - an interesting matter given the acute dovish views President Trump has supported recently. For the Euro, we have general themes like monetary policy which will be touched upon later in the week with the ECB decision, but for now, the focus was on data. The Eurozone's ZEW investor sentiment survey continued to plunge painful negative territory (-20.9) but it was the German current conditions that truly shocked with a drop from 43.3 to 27.6 - further building on fears of an impending economic stall. 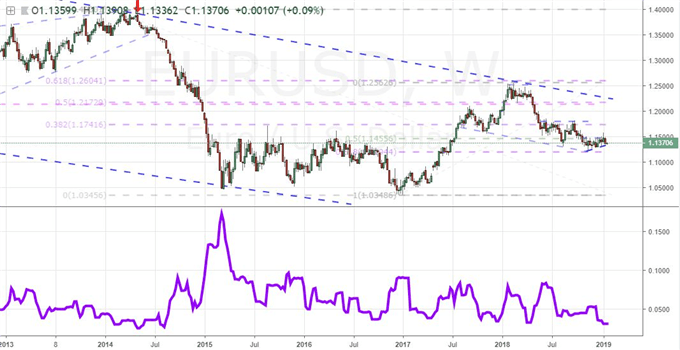 Outside of the top liquidity currencies, there were key fundamental charges for more targeted interest. For the British Pound, the focus remains the Brexit situation. That is true when we are trying to weigh how data like the monthly employment statistics should be evaluated. Jobless claims in the previous month's reading were a hearty 20,800, but that matters little when the course of the UK's divorce from the EU is still so unclear. The EC's top spokesperson warned that a 'hard Brexit' would end with a 'hard border' for Northern Ireland. For the New Zealand Dollar, the 4Q consumer inflation (CPI) reading proved market moving even though the actual update was only subtly different than the forecast. A 0.1 percent increase in prices through the quarter kept the annual figure at a 1.9 percent clip (still below the RBNZ's target). As for the Kiwi's reaction, it was most notable through pairs like AUDNZD and NZDCAD. Ahead, while the Japanese Yen has considerable stake in trade figures and Bank of Japan rate decision, there just isn't much market moving potential to assume from either. As for the Canadian Dollar's appealing technical picture on an equally-weighted basis, the correlation to crude oil is hard to miss. The commodity was checked lower this past session in a not-so-subtle follow on risk trends, though many energy headline watchers also picked up on the delayed conversation between Saudi Arabia and Russian officials for production cuts. We discuss all of this and more in today's Trading Video. 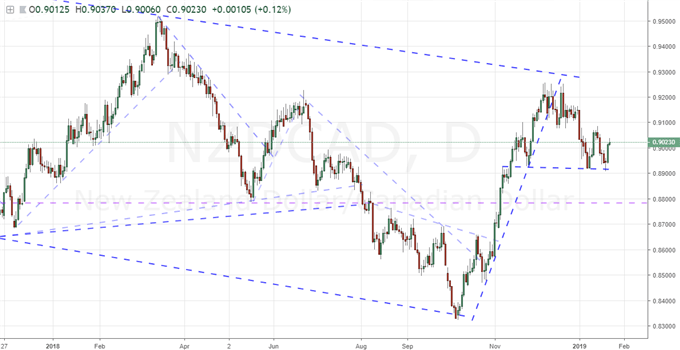