There is a lot going on in our markets with competing event risk and themes stirring volatility not typical for the time of year. What is most important to watch for your market? How should you adapt your strategy for current conditions? What markets and currencies are most at risk - and which best positioned to climb? Bring your trading, market and strategy questions to the weekly Q&A later today. Sign up on the DailyFX Webinar Calendar.

Dow and US Indices: From a Critical Technical Breakdown to a Hope-Inducing Tail

Last we left the markets Friday at the close, the S&P 500, Dow and other benchmark US indices were on the verge of a high-profile trendline support that has held up the market through much of 2018. It was chart-based line in the sand that could have raised speculative fear even further than above its already-elevated state. As we kicked off the new trading week, the markets were ready to put hold-out bulls' commitment to the test. Risk aversion was modest at the beginning of the day with Asian indices sliding but the real pressure seemed to kick in during the European hours with the German DAX receiving some of the most acute pain - remarkable given the headlines coming out of the UK and France. Fear started to genuinely hit its stride in the opening hours of the US session however as the Dow dropped below 24,000 and the S&P 500 below 2,600. These are overt levels of technical support established in a trendline of lows tested in 2018. For the traditional technical trader, this looked like the fuel for a bearish breakdown. Yet, once again, before a reliable trend could establish itself for the confidence of market participants, a bid turned the market back from the edge. What was initially a day of exceptional single-day losses and key technical progress turned into a pattern that many consider reliable signal for a strong reversal. The intraday about-face left the indices with massive wicks - one of the biggest in eight years - which seems to do more insinuate a drive to maintain range than it does to truly put the power back in the bulls' hands. 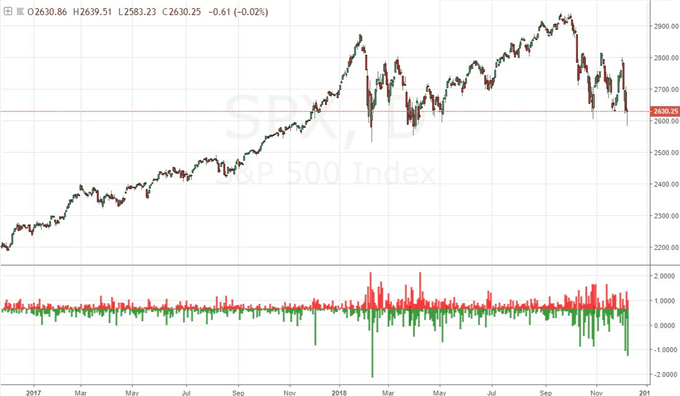 Last week's tumble was a strong signal for a rising bearish tide, while this Monday's price action alone seems to provide the same gauge of intensity just for the bulls. This can be confusing and frustrating, but it may help to reduce our sense of surprise if instead of assuming a schizophrenic market for direction, view it as a lack of conviction in bearing with an abundance of volatility arising from stability fears. Volatility is proving remarkably persistent in holding to higher elevations - especially given the time of the year. Uncertainty is the foundation for volatility and a reduction in liquidity only exacerbates the violence in sudden course corrections. The longer this flighty condition persists, the greater the risk that an 'accident' befalls investor sentiment. It may not drive the market to a systemic trend during these restrained markets, but it can set the stage for such a committed drive when conditions fill back in early 2019. And, it is that appreciation of underlying conditions which should keep us tuned into systemic risks. The longer and more drawn out fundamental troubles are, the less dramatic the market response. Yet, the complexity and duration can more systemically rout the financial system. Trade wars remains one of the most comprehensively threatening issues to global growth and financial health. Following the update on Chinese trade (disappointing) on Saturday, it was reported that US Trade Representative Lighthizer believes the 90-day pause on the countries' trade war escalation was a 'hard' timeline. Given the move to detain Huawei's CFO, it doesn't seem like the conversation will grow any more congenial. Meanwhile, the basic forecast for growth and market appetite seems to be taking a serious turn lower. There are many market measures to see this through, but it is global sovereign bond yields that I find the most telling.

Shifting from broad, open-ended risks for the financial order to those issues with a more targeted influence, the Brexit situation has surprisingly managed to raise an even-greater sense of urgency and uncertainty. With the market already paying close attention to the UK's divorce from the European Union owing to the important vote on Tuesday, Prime Minister Theresa May through the market for another loop when she announced that the Parliamentary weigh in would be delayed. Recognizing the likelihood that the MPs would vote down her proposal - and the subsequent difficulties that would create after last week's votes - May decided to take strategic steps to retain greater control over the proceedings. Yet, her efforts don't put the country and currency on any clearer a path. In fact, they situation looks even more troubled - if that is possible. The Prime Minister has a number of weeks to work another bill that she will attempt to bring all the critical parties together on. It is unlikely she happens upon such a compromise, and in the meanwhile precious time to work a viable solution will have been squandered. With this take, the probability of a more disruptive outcome (no deal, second referendum or confidence vote) rises sharply. The EU's Tusk has further raised the prospect of such an belligerent stance from Europe's side with a blatant statement that no renegotiation would be considered and a meeting on Thursday amongst members to discuss a 'no deal' outcome. The GBPUSD dropped to its lowest level since April 2017 on a decline that was at one point the worst seen since the October 2016 flash crash. Don't expect stable Pound markets to trade any time soon.

The Pound is the only currency at risk from the contentious divorce. The Euro is just as exposed to a bad outcome. The European Union is turning the screws to a certain extent, but there is a reason they are pursuing such obstinance: they don't want to encourage other members to follow in the UK's path. A favorable outcome for this once-family member would raise the possibility that this represents a legitimate option for the likes of Italy and Greece. Yet, that is a recognition for a later date. In the meantime, there are more immediately recognizable issues to assess. Italy's government is reportedly slowly working down its spending budget to a possible 2.0 percent (or 1.9 percent if Finance Minister Tria gets his way), but that is still likely far beyond what the EU is looking to approve. The EU's Dombrovskis has said the draft budget was a 'serious' breach of EU rules, which means the numbers are far off the market. Meanwhile, the ECB rate decision on Thursday is hanging over the markets head with the uncertainties for global monetary policy and unique financial issues for the region likely pushing the central bank to rethink its timing of an exit form extreme easing. A Reuters poll suggested participants still expect QE to end this year and a deposit rate hike by 3Q 2019, but confidence is flagging. Another regional risk to watch is France which has experienced riots which have prompted Macron to announce a budget reversal to quell anger. That will draw the EU's scrutiny as well. The Euro is facing numerous possible fundamental risks to stability and the Pound is clearly under pressure. Where does capital move in such a scenario? Towards greater liquidity. There is only one currency more liquid than both the Euro and Sterling: the US Dollar. So while the Fed rate forecast may be retreating, the Greenback may be in able to leverage the pain of its counterparts for its own advancement. We discuss all of this and more in today's Trading Video. 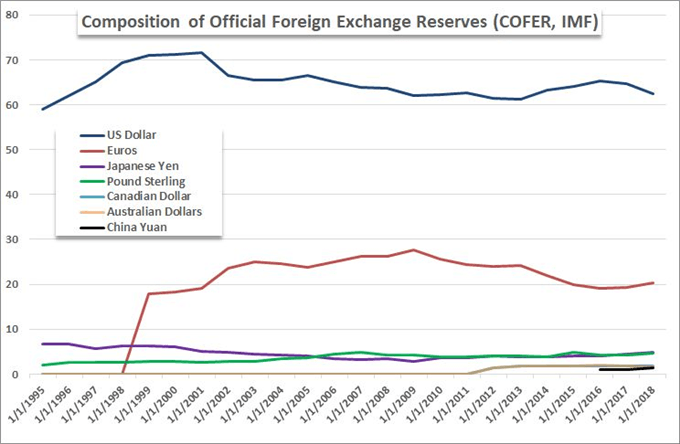