Following the sharp rally in Dow and other US indices along with the bearish gap for the US Dollar, how are retail FX and CFD traders positioning for the next move? See how these traders are positioned on the DailyFX Sentiment Page.

Enthusiasm Following the US Election Lasted for a Single Day

That didn't last very long. The charge given to the capital markets following the tally of the US mid-term election results was remarkable. Hearty gaps and strong single-day rallies for the US indices helped hearten other, more loosely associated 'risk' assets through Wednesday. The jolt of enthusiasm in the already unfolding rebound from the week before leveraged speculation that a more productive bull trend was underway. Fundamentally, that seemed a stretch and the effort to see the silver lining in a government looking at more gridlock should offer us little assurance that our course has been settled. If there was confidence born of such a assessment, it was severely undermined this past session. Following the strong moves from the S&P 500, Dow and other risk-leaning assets Wednesday, the following session offered stalled enthusiasm at best this past session. From the benchmark US index, a gap lower on the open was the first slip on the start for the month. Meanwhile, global equities started to slip back into more familiar trends, junk bonds cut back into their previous multi-month record jump and the EEM emerging market ETF reversed from channel resistance. Only the equally-weighted Yen cross I keep tabs on (as a carry trade perspective of risk) managed a notable extension of its climb, but even that faces more significant restriction ahead. Thus far, we have seen a strong bounce to retrace some of last month's intense losses. We have yet to define a long-term trend bearing - at least not from the US stock market - but we are working with an abundance of volatility. With this degree of dramatic oscillation, a trend is more likely to develop. 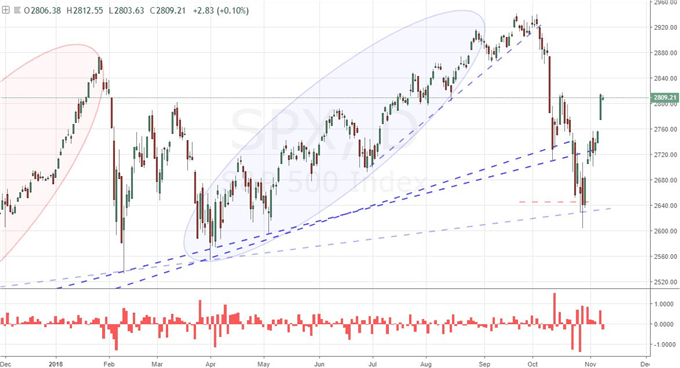 We are Reminded of Trade Wars and Monetary Policy

As the question of speculative intent is cast, the next thought is to motivation. What can engender the renaissance of speculative appetite that is still not significantly deflated from the past decade's climb? Or, alternatively, what can turn confidence into panic of excess in a sweeping financial fire? Trade wars were offered an important statistical spark this past session from the Chinese October trade report. This was the first full monthly report that would fully reflect the impact of President Trump's additional $200 billion tariff upgrade on the country; and yet, the figures proved robust. The country's trade surplus for the month hit $34 billion on a near-16 percent increase in exports. That is robust. On the other hand, it is likely in part temporary as exporters move forward orders ahead of the expected upgrade in the tariff rate from 10 percent to 25 percent at year's end. This theme still has an unsettling capacity to stall global growth and break up global capital rotation, and so traders should remain vigilant. Another critical theme to monitor for stability in speculative appetite is global monetary policy. The Federal Reserve delivered its policy update this past session and they managed to stay exactly within the lines of the forecast they have shaped for months. Though they offered no change to the benchmark range at 2.00 to 2.25 percent, the language accompanying their statement presented no reason to adjust forecasts set by September's Summary of Economic Projections (SEP) which priced in a December hike and three more moves through 2019. Status quo reflects a remarkable advantage for the Dollar overall, but this has been deeply discounted already by the market. Fine adjustments for the Dollar will catch more traction if they are disappointing, but each update serves as a threatening reminder of how much speculation is dependent on years of extreme stimulus - and the reality that this support is in the process of being rolled back. 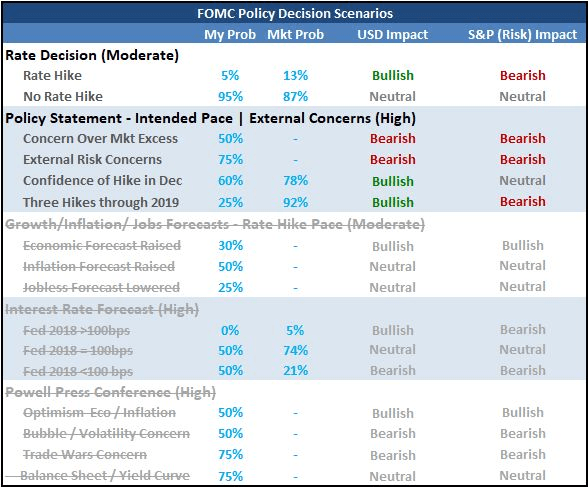 A Growth Forecast for Europe and GDP Update for the UK

Where US monetary policy and Chinese trade heath tap into more readily identifiable systemic themes, updates on more targeted themes deserve our attention as well. For the Euro, primary concern should be over the tenuous relationship between the European Union and Italy. The country's leadership is determined to push forward with a significant increase in spending that would run afoul of the Union's restrictions. Yet, hard dates and critical consequences are not so easy to follow as milestones. The country owes an updated plan to its peers next Tuesday, but there are few other critical dates between now and then. Nevertheless, Prime Minister Conte has made clear he does not intend to back off of his plans to support a very accommodative program to help jumpstart the economy. That said, the European Commission's updated forecast gave insight into why they are not willing to budge on budget exceptions. Aside from the precedent or unfair advantage is could represent to a single large member, Italy's plans are based on a growth forecast that Europe says is clearly unrealistic. As for the British Pound, the over-riding theme of influence is clear. The Brexit is a constant cloud over the Sterling, and each week - perhaps even day - that passes without progress possess an increasingly greater risk. Following the UK cabinet's inability to foster a breakthrough on their country's approach to the divorce negotiations with EU counterparts, there was anticipation of a second gathering Friday. I've seen nothing to confirm such a meeting is on tap. What is definitively on tap for release though is the run of data in London hours topped by the 3Q GDP and last month's trade report. These indicators offer further fundamental reach, but their influence is almost certainly greater through disappointment. Keep that bias in mind when you evaluate pairs like GBPUSD, EURGBP and GBPJPY 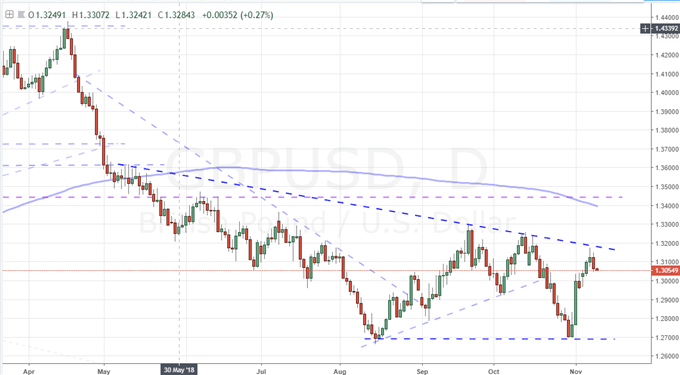 With US equities posted a strong bounce in an exceptional, fledgling bear trend this past week, the Dollar struggling to pick direction in its winded medium-term bull trend and emerging markets maintaining a medium-term but throttled bear trend; it becomes clear that a clear and consistent trend is a rare event in the liquid markets. It just isn't a viable occurrence with speculative appetite as stretched as it is. However, there are as-yet unbroken moves out there that are attempting to defy convention or simply just have yet to fall into line. One of the most prominent of these assets is crude oil. The US-based WTI benchmark has dropped to its lowest level in eight months and has done so recently on the backdrop of a 9 consecutive trading session slide - the longest drop in over four years. What's more, the commodity qualifies as a bear market with a greater-than-20 percent retreat from peak highs in just over a month. Is this a run that will continue despite a general sentiment leaning against such commitment? If there is trend potential for crude, there is opportunity for other markets to do the same. The Australian Dollar and New Zealand Dollar's rallies are very early and shallow measures of bullish trends - further defying their carry anchors - but the bias against fundamental headwinds would suggest an appetite that may override issues. We discuss all of this and more in today's Trading Video.

Chart of US Crude Oil and Consecutive Candle Count (Daily) 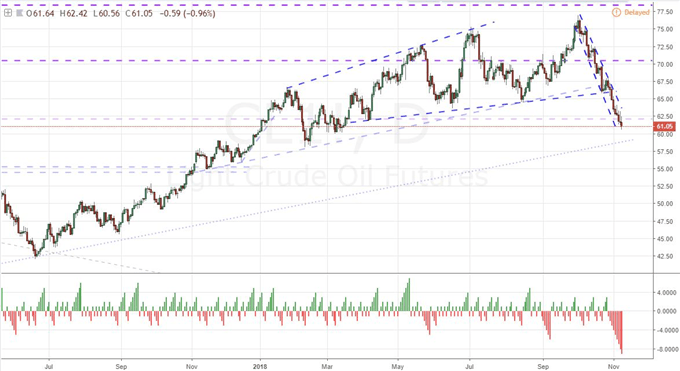