Finally, Some Enthusiasm from Trade Wars?

US equity indices extended the charge behind a recovery in speculative interests, and it seemed some of that largely isolated enthusiasm was starting to spread to harder hit and more reserved asset classes. A third consecutive daily advance for the S&P 500, Dow and Nasdaq 100 still registers as a nascent reversal, but the scale of the move was nevertheless the largest such charge since the US presidential elections two years ago. That is fitting, given the mid-term elections are next week, but is that the source of this enthusiasm? If so, how reliable would such a charge be for global risk assets? If we check in on the polls, there is little relief to be found in Tuesday's vote and an abundance of uncertainty. More likely, the past session's gains were likely the combination of moderate fundamental influence and a natural speculative bounce following an extraordinary retreat through the previous month. For tangible motivation, we had a few high profile economic indicators that didn't reach the 'systemic risk' end of the scale, and some of the classic themes were presenting a mixed picture. One noteworthy improvement in perception was registered through trade wars. The sentiment surrounding the acerbic relationship between the United States and China has only really atrophied over time, so it is understandable that the market responded with perhaps too much optimism to a questionable sign of improvement. US President Donald Trump - previously shutting down talks and threatening to expand tariffs to all Chinese imports - said that he and Chinese President Xi had a productive call Thursday morning. They are due to meet at the G-20 meeting on November 30 - December 1. Would risk appetite hold up until that event? Unlikely. 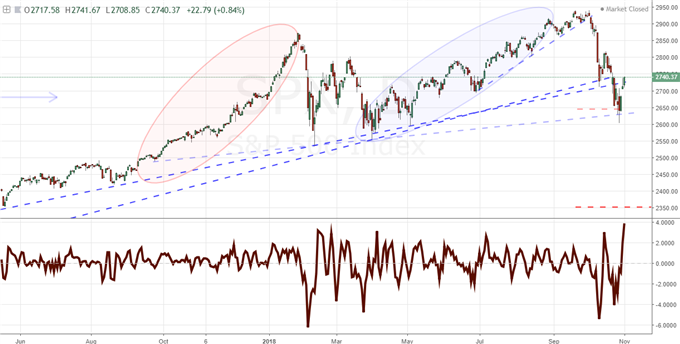 Another theme of consequence this past session - with both targeted currency impact and an underappreciated global risk influence - was monetary policy. The Bank of England (BOE) delivered an unexpectedly hawkish policy decision, though it would leave its benchmark rate unchanged. Despite the unrelenting threat of a 'no deal' Brexit for the United Kingdom in four months, the central bank raised the forecasted pace for rate hikes moving forward. Governor Mark Carney and the Monetary Policy Committee (MPC) set a baseline forecast on the UK government coming to a compromise with its EU counterparts in order to avoid a crash out. That said, the group stated its concern over what could befall the financial system and economy should an agreement not be met. Further, there is material fallout from concern leading up to the decision in the form of a downgrade in growth forecasts. Given how familiar the Brexit concerns are for the market these past months, there was little in the way of fresh fear to price in; but that hawkish outlook and the BoE's confidence in the base case offered a clear boost to the Sterling. An equally-weighted index of the currency charged higher, but GBPUSD itself posted its best single-day performance since April 18, 2017. The real question to this move is whether it will lead into follow through. Rate expectations carry far less weight than Brexit when it comes to dictating Sterling runs. Meanwhile, there is another, more systemic facet to this event that has garnered far too little attention. Yet another major central bank has committed to a tightening path during a transitional period for the global economy and financial system. This further teases the stability of risk trends that grew unabashedly dependent upon the backstop from central banks' massive stimulus programs. It is possible the markets remain oblivious to the implications of this development, but they could just as well stumble across it if looking for a reason for caution.

Daily Chart of GBPUSD and 1-Day Rate of Change

Where Is the Dollar Drawing its Pain?

In contrast to the Sterling's impressive climb this past session, the US Dollar suffered a steep decline. EURUSD earned a bullish bounce at the closely observed August swing low at 1.1300. For the trade-weighted (in other words EURUSD dominant) DXY Index, the Greenback's charge was the biggest bullish move in four months. However, if we de-emphasize the influence of that particular pairing, an equally-weighted measure of the USD-based majors suffered its biggest single-day loss since March 14, 2017. What was the motivation for this move? It would be easy to assign this retreat to the data released on the day. The ISM manufacturing activity report for October showed a significant slide to 57.7 versus 59 while new orders dropped to 57.4 against 61.8. This measure is important for economic activity and carries a certain degree of political cache, however it isn't weighty enough to earn a serious charge much less facilitate a trend. More practical than the data on the day would be the moderate rise in risk trends. At the extremes of sentiment - full liquidation seeking liquidity or aggressive risk appetite that keeps the Fed on pace - the Dollar benefits. Moderation on the other hand is not the currency's friend. Another factor of sway is the Dollar's role as the benchmark currency in the FX market. If the Euro, Pound, Yen and/or Aussie Dollar were to rise; the pressure would build on the USD. That seemed exactly the case this past session with abrupt moves from major counterparts. Ahead, we have two key pieces of scheduled event risk of consequence: the October labor report and the previous month's trade balance. The NFPs will carry the greatest potential for short-term volatility, but the measure for trade wars presents an update that hits a deeper fundamental current.

Abrupt Rallies for the Australian and New Zealand Dollars, Anticipation for the Loonie

Speaking of strong moves that would drain capital from the Dollar, the Sterling wasn't the only currency on a significant run. The Australian and New Zealand Dollars both put in for a remarkable charge this past session. The combination of their own performance paired with the USD's slide would render critical technical breakouts for AUDUSD and NZDUSD. The question is how much potential there is for a lasting trend reversal. There was data to utilize for the Aussie with third quarter import inflation and last month's commodity price report both rising more than expectations. That said, the high profile release was the monthly trade report which printed a A$3.02 billion surplus that nearly doubled forecasts. If this was the motivation for the rally, it may struggle moving forward - that goes double for the Kiwi which didn't have a material survey of its own. Looking ahead, there is some light event risk for both currencies before the week ends and anticipation of RBA and RBNZ rate decision next week. A more immediate opportunity to leverage scheduled event risk comes through the Canadian Dollar. Due for release as the same time as the US calendar run, Canada will report October employment statistics and September trade figures. While this is unlikely to establish a long-term trend, it is data that has proven more than capable of generating volatility. We discuss all of this and more in today's Trading Video.