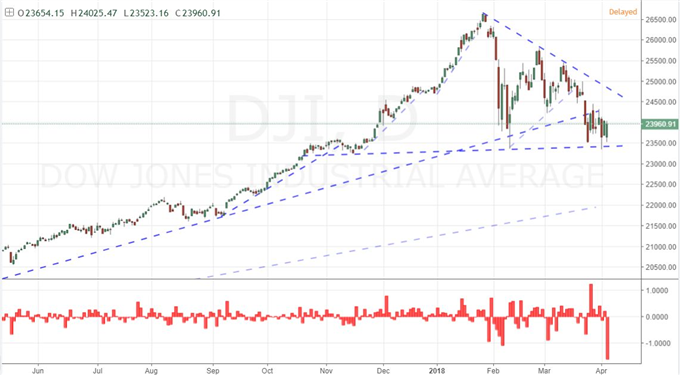 See how retail traders are positioning in the Dollar-based majors versus the S&P 500, Dow Jones Industrial Average and equity benchmarks on an intraday basis using the DailyFX speculative positioning data on the sentiment page.

US equity indices ended in the green Wednesday. A casual glance at a candlestick chart from the Dow, S&P 500 or other major US-based benchmark would not only offer a modest confidence that markets may be stabilizing, but it has even leveraged outright enthusiasm from the perennial dip buyers that record highs are once again possible. However, a closer look at the state of our market environment should show us that there is more than enough reason to be extremely cautious. Putting aside the fundamental issues of instability driven by a rising trade war and direct attacks by the US President on major stocks that have led the rally over the past years, we have technicals and general conditions that are of considerable worry. The bullish progress Wednesday from an open to close basis is significantly downgraded in a comparison of close over close. That's because US indices suffered severe bearish gaps on the open Wednesday. The drop between the Dow's open Wednesday and its close the previous trading day was the biggest bearish gap in 17 years. Furthermore, the volume behind the sessions dubious advance was the thinnest in weeks. This does not add up to genuine conviction.

The Persistence of Volatility Amid Trade Wars and Trump

For many, as long as major technical milestones continue to stand; their worries are minimal. However, that is an overly simplistic and naive assessment of conditions moving forward. While the S&P 500 managed to retake its notable close below the 200-day moving average at the start of the week after 448 trading days above (the Dow never slipped its own average and now has a tally of 445), we are still registering persistently high levels of volatility. Elevated levels of activity are not a boon for traders looking for faster profits on directional trades. Volatility is commensurate with uncertainty. And the longer it remains elevated, the more systemic changes in underlying trends and conviction (especially complacency) grows. We have already seen multiple, wild swings from the likes of the US equity indices; and all it would take is a particularly troubling headline to redirect this torrent of speculative activity towards a cliff of sustained deleveraging. The US President may prove one of the true instigators of the next phase of global risk trends. Just as his growth-oriented promises during the campaign and after his election victory deflated volatility and extended markets higher, his attacks on industry-leading stocks (like Amazon) and stoking of trade wars can prove the motivation for a broad and true reversal. Beware the channeling of this exceptional activity.

We discuss how remarkable the contrast between the activity level of the S&P 500 and the US Dollar was on Monday alone - where the index tumbled while the currency held stock still. Now further into the week and with liquidity filling out, we still see the same exceptional contrast. Large session gaps and price swings from the equity market while the DXY Dollar Index faces its lowest level of non-holiday activity since the summer of 2014. There is some corollary to be found here to the VIX which ended 2017 at an extreme low only to see a ground shaking reversal in 2018. The inactivity from the Greenback should not be considered confident stability but rather anxious uncertainty. The Dollar's position in the global financial system is under serious scrutiny as the United States actively withdrawal from global trade to focus on protectionist objectives. That will see a future of lower general investment in the United States and a significant discount in the use of the intermediary currency if this trajectory is maintained. Instead of being lulled into a false sense of security - or boredom - FX traders should be on alert should the market decide to reevaluate the Greenback's position in the global spectrum.

If volatility were added to the Dollar, it would be difficult not to see that activity boost transmitted to its major peers. There are certain currencies that are significantly overpriced on a fundamental basis, and a few that are undervalued - even relative to the Greenback. We are starting to see some listing from two of the most fundamentally stretched of the majors lately: the Euro and Pound. As such, it is important to keep close tabs on the market's commitment to systemic themes. The Euro has boasted one of the most remarkable advances on one of the flimsiest backdrops. Relative growth, political stability and rate speculation factors made for a composite strength in bulls' minds; but the depth of this strength is highly questionable. An equally-weighted index for the Euro crosses shows a technical trend that is coming under pressure. The same is true of the Pound having over-corrected from the post-Brexit plunge. On the opposite end of that extreme, we have seen the Canadian Dollar continue to recover from its deep loss of ground even without fundamental milestones to move the reversion ahead. We look at the standings and catalysts for the FX and capital market in today's Trading Video. 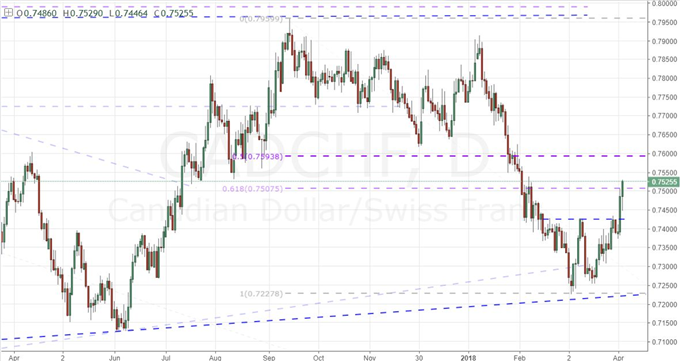