We have finally seen a crack in the facade of glowing optimism surrounding otherwise stretched risk trends. This past session, the S&P 500 posted its first day-over-day loss in seven sessions - so the first decline of 2018. This misstep was not isolated to this particularly high flying index either. US equities slide across the board and the range of sentiment-motivated assets showed at the least indecision and more frequently loss. Among the benchmarks that have been used to promote confidence these past weeks and months that lost ground were the DAX, Nikkei 225, junk bonds and Yen-based crosses (carry trade). This is only a single days performance and one bar does not make a trend; however, skepticism has been cautiously awaiting just such a slip. The question is how far the anticipant extends as value and price debates grow more prominent. There were many possible catalysts to the slip in optimism this past session, but one particularly prominent concern which we should consider is the dependency that has grown over time on global monetary policy.

Central banks over the past decade have been some of the largest and most committed buyers of benchmark assets (Treasuries, asset-backed securities and even some high credit quality capital market assets). That effort was originally intended to promote economic recovery, but at a certain point it transitioned into more of a feeder for speculative gains rather than genuine inflation and GDP support. With years of extremely low volatility and increasingly difficult 'stock picking' conditions, the market's participants have committed to the all in with trend sentiment. That creates a dangerous backdrop where conviction and value are far off the mark. We are reminded of this dependency now not necessarily due to the Fed's series of rate hikes nor the ECB's regular warnings that it was preparing its own exit sometime in the future; but rather due to the Bank of Japan. This group has been the most prominent example of dovishness offering no end to its QE effort to speculate on. Yet, this week we have seen a small adjustment in their asset purchases that have stoked concern. Whether this is their genuine intention or not, we are left with the impression of how important this is to market's stability and how closely they are watching.

On a similarly global scale, we have seen a dependency in rates grow out of the persistently low level of US Treasuries. That has slowly started to change though with the benchmark 10-year Treasury yield rising lately on the backdrop of the economic outlook and Fed activity. It was hastened in a concerning way this past session though when it was suggested that the Chinese officials responsible for recommending investment of foreign reserves suggested the reduced or full halt on purchases of US government debt. China is the largest holder of the country's debt. This could be a simple investment recommendation or not-so-subtle threat to the country that has threatened to crack down on perceived trade inequities. Problems between the world's largest and second largest economies are always critically important. In other global trade news, it was suggested by an unnamed Canadian government official that they believed the Trump administration would pull the plug on NAFTA amid unproductive negotiations. Both the Mexican Peso and Canadian Dollar dropped in response, but the latter’s was more intense and more permanent. We discuss these large systemic moves, targeted currency shifts (Pound, Euro), commodity volatility and cryptocurrency settling in today's Trading Video. 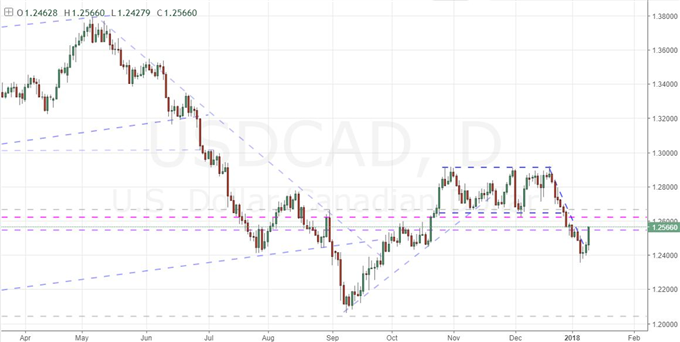 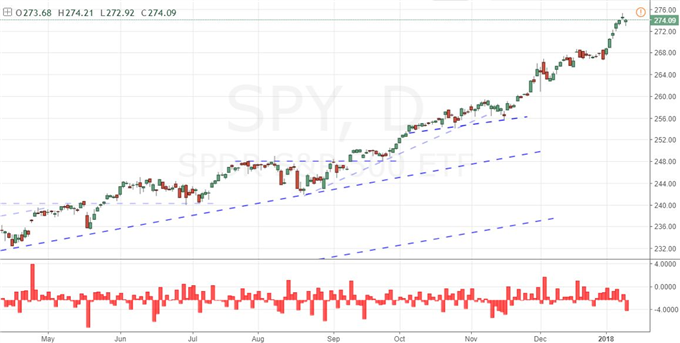 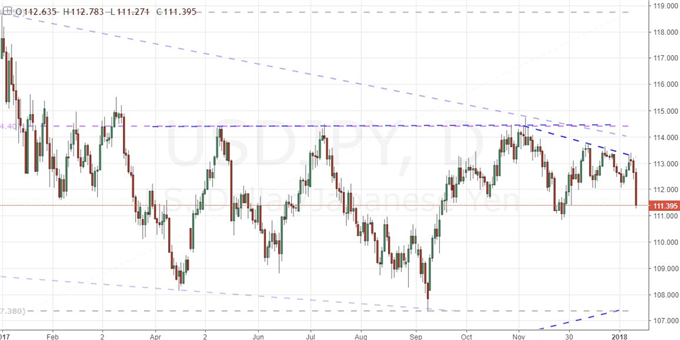