- IG Client Sentiment is currently showing +4.74 traders long for every one short, and given retail sentiment’s contrarian nature, this is bearish.

On Wednesday, we looked at the continuation of the bearish move in Gold prices after support had begun to show at a key Fibonacci level around the $1,219 zone. But as we warned, the bearish move had shown considerable aggression at that point, and rather than using that support level to stage bullish reversal approaches, traders would likely want to wait for some element of short-term resistance to come into play before looking to add short exposure to Gold. The ‘R1’ level that we were looking at for the first potential barrier of ‘lower-high’ resistance has come into play twice since that article, with sellers responding in each instance.

The most recent of these tests took place shortly after this morning’s Non-Farm Payrolls report was released. The Dollar posed an impulsive trend-side move as the report was filtering into markets, and this created a quick spike-higher in Gold prices. But as Dollar strength began to show, Gold prices tipped-lower and prices were offered below a number of support levels, including the Fibonacci support that had previously helped to hold-up price. 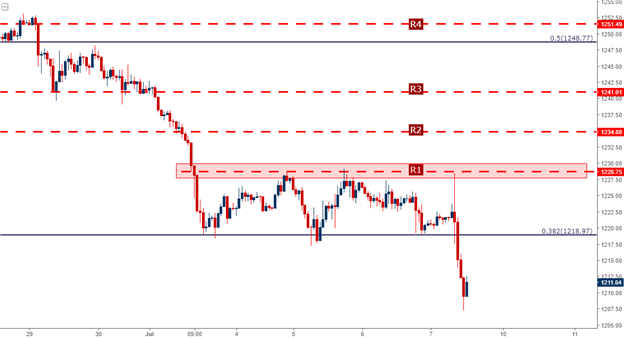 This support break puts longer-term Gold charts in a fairly precarious position. We’ve now traded below the prior May lows, and given the strength of the fundamental drivers behind the move, it’s still rather difficult to project that a low may be in play anytime soon. There is a very interesting level at the psychologically-important $1,200-handle. This is the 38.2% retracement of the ‘lifetime move’ in Gold prices, taking the Bretton Woods fix of $35/oz up to the 2011 high of $1,920.80. Perhaps more important than just a theoretical basis – this zone had helped to catch the lows in Gold prices in March, right around the Fed’s rate hike. 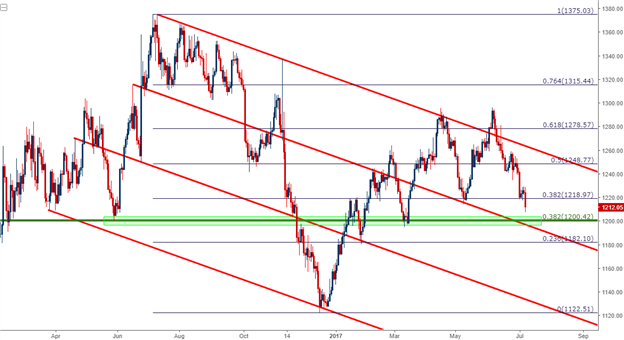 Despite the fact that this longer-term support level could open the door to bullish reversal strategies, traders would likely want to tread carefully here, as little has been unable to inspire strength in Gold prices of late. Gold prices have been dropping while the Dollar has been strong, and they’ve been dropping while the Dollar has been weak; highlighting the fact that what we’re seeing here is likely being driven by a shift around growth and rate expectations. And given that we’re looking at a set of extended comments and interviews with Chair Yellen’s Humphrey Hawkins testimony on Wednesday and Thursday of next week, and there is certainly opportunity for trend-side continuation.

Ahead of that testimony, we will likely see markets attempting to position-in, and traders looking for bearish exposure in Gold can re-assign that prior support level as potential resistance for short-side continuation approaches. Below, we’re looking at three potential resistance areas that can be used for such a purpose, including our prior level of Fibonacci support as ‘R1’. 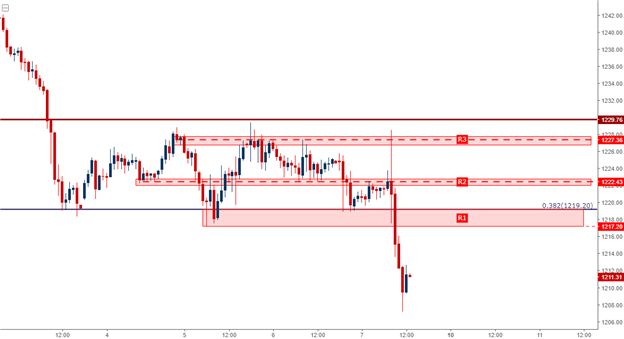