In our last article, we looked at the parabolic-like top-side move being seen in the Gold market as U.S. rate hike expectations were continuing to get kicked lower. Over the previous two months, we’ve seen two rather pronounced themes in Gold prices around the topic of U.S. rate hike expectations. Throughout the month of May, multiple members of the Fed volleyed expectations higher as they warned of a potential hike in June. But when we came into June, it became painfully obvious that this likely wouldn’t be the case, spearheaded by the abysmal Non-Farm Payrolls report on June 3rd. And throughout the first half of June as the prospect of slower rate hikes out of the Fed became more widely accepted, Gold went on to rally as it had through February and March of this year when the same theme was showing prevalance.

But it was the fear emanating from the Brexit referendum that really gave Gold prices a major-shot higher, gaining as much as 8.6% as global markets ran for cover after the surprising vote. On Friday, traders saw both the US Dollar AND Gold prices move higher, which is an abnormal type of observation; generally reserved for ‘flight-to-quality,’ and ‘safe-haven’ runs.

But it’s the prospect of continuation that makes this a really exciting setup: Should the Fed back down even further, perhaps even cutting their expectation to a single hike this year, Gold prices could get another lift-higher as it becomes obvious that the Federal Reserve probably isn’t going to hike rates in the face of the numerous economic pressure points showing prominently around the globe.

The difficult part of this, as it has been in Gold, is getting long at the right time. If we look at Gold prices post-February after first crossing back above the $1,200-level, price action has spent a large portion of the time moving lower. But the moves higher have been fast, sharp and rather violent. 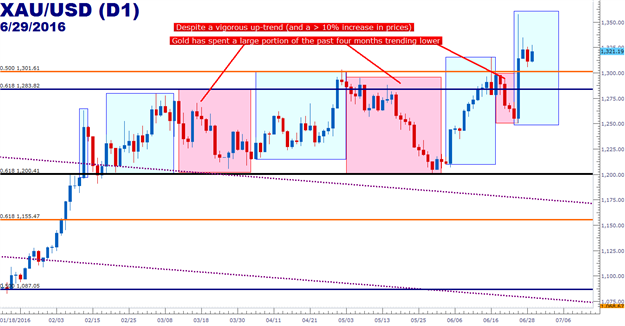 And given that each of these bearish moves lower have come after a quick-burst higher, it makes sense that this was merely consolidation while markets waited for that next indicator of global economic weakness, highlighting the fact that the Fed probably won’t be hiking anytime soon.

So, the key here is being long at the right time, and perhaps more importantly, the right price as retracements could be especially vicious. And given that we’re still in the process of consolidating after another major-burst-higher, traders would likely want to wait for more confirmed support before looking to trigger-long.

A level of interest for such a theme can be found at $1,283.82, as this is 61.8% of the 1999 low to the 2011 high and, perhaps more importantly, this is a level that’s caught a significant amount of support and resistance over the past four months; also functioning as the March ‘swing-high’ in Gold prices. If support shows around this level, traders can look to implement old resistance as new support in a burgeoning up-trend.

As for the next possible motivator for continuation-moves, Non-Farm Payrolls on Friday July 8th, and could be a likely period for enhanced volatility in macro markets. If we haven’t heard of additional developments in Brexit discussions, and if no bad news emanates out of Asia, this could be a likely target to look for that next ‘big move’ in Gold prices. 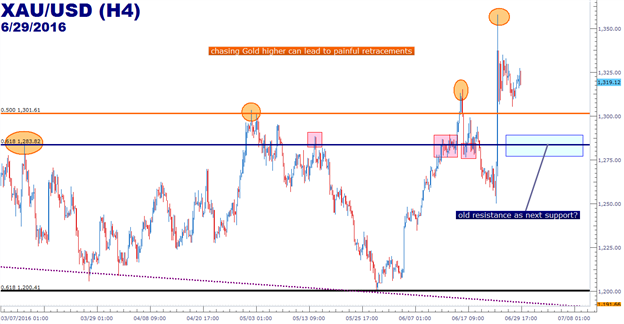