- Markets saw extreme volatility as British voters elected to leave the European Union. But this is not likely a cut-and-dry situation, as it may take over two years for the split to be negotiated.

- We’ve already seen threats of intervention from Japan and actual intervention out of Switzerland; and we may be sitting at the forefront of even more globalized Central Bank action in preparation of the split of the UK from the EU.

- Conditions are expected to remain volatile at least until the end of the week. And this may be a really bad weekend for holding risk, as this is still very much a fluid situation with some very uncertain ramifications. Goldman Sachs has said that the economic impact at this point is incalculable, so retail traders may want to take note and exercise caution. This could be a great time to brush up on the approach by improving risk management, or learning about new indicators that can assist in more normal, less chaotic market conditions. If you’d like to learn about SSI, please click here, and if you’d like a shorter-term indicator, please check out our recently-unveiled Grid Sight Index indicator.

A surprising twist in the Brexit vote has roiled capital markets around the world. While markets were banking on a ‘remain’ vote going into the exit polls, a majority ‘leave’ vote brought considerable risk aversion across capital markets. This led to jaw-dropping moves across the spectrum as the British Pound posted a historic drop to a fresh 30-year low while risk aversion began to run high around-the-world.

The British Pound dropped by 12% in a little over six hours as news of the referendum vote was filtered in to markets. This sent prices below the Financial Collapse low of 1.3500 before recovering; and that recovery has seen a 3.9% bounce off of the lows. And this is a currency, so a 3.9% movement in a day is jaw-dropping, much less a 3.9% movement retracing an earlier -12% slide. This is still extremely volatile, and will likely remain as such at least through the weekend. So, the same advice that we offered yesterday, saying that traders should tread cautiously if at all in these conditions will continue to persist.

Chaos in the British Pound 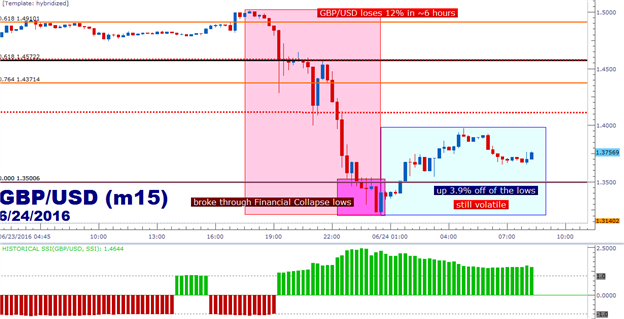 But this is still very much a fluid situation: Now that the votes have been cast to leave the European Union, this sets in-place a slow moving political process that could see the divorce between the UK and the EU drag out even longer than the mandated two years.

First thing first: Yesterday’s referendum isn’t technically legally binding, so Prime Minister David Cameron does not have to honor the vote. But all signs indicate that he is going to respect the will of voters, and this was confirmed earlier this morning when he announced his resignation from his Prime Minster post in order to allow ‘fresh leadership’ to guide the United Kingdom in this new direction. Speaking of the United Kingdom, last night’s vote to leave all but ensures yet another Scottish Referendum for independence, as Scottish First Minister Nicola Sturgeon said on Friday that the country would do what is necessary to secure their place in the European Union. She went on to say that a second independence referendum is ‘now highly likely.’

The next step for Mr. Cameron is to invoke Article 50 of the Lisbon Treaty to begin the legal process for the UK to leave the EU. Once this happens, we’ll see a series of negotiations between politicians from each side to decide exactly how to best organize the impending split. Article 50 allows for two years for this process, but this can be extended by both sides agreeing to the need for additional time. The UK has been a part of Europe since the EU’s predecessor, the EEC, since 1973; and this has produced decades’ worth of trade deals and legislation that will take some time to unravel.

On Tuesday and Wednesday of next week we have an EU Summit (June 28-29), and this could be an opportunity for Mr. Cameron to give notification of the UK’s intention to leave; although he may wait a few months before doing so in order to allow his successor to take those reigns. It is likely that the topic of Brexit will be at the top of discussions at this summit, and EU leadership has already begun talking about a special meeting to be held in July in which the UK will not be invited so that EU leadership can discuss strategy moving-forward.

The Ramifications Aren’t Localized to Just the UK and Europe

Probably one of the most profound events last night was the global market reaction to a vote to leave. While this was a threat for months leading into last night’s vote, a recent swing to the ‘remain’ side in last minute polls had built-in the expectation that British voters would elect to stay. But as we discussed yesterday, this was a dangerous prognostication because many of those expectations were being driven by bookies’ odds. And while bookies did a far better job of forecasting last year’s General Election, they soundly whiffed on last night’s referendum as they were universally predicting that voters would elect to stay.

The vote to leave brought a near-immediate impact to capital markets. The British Pound fell dramatically to a fresh 30-year low; and the Euro put in an aggressive down-side move as well, dropping by more than 500 pips from yesterday’s high. Risk aversion ran high as the US Dollar strengthened against every currency other than the Yen, and global equity markets put in big moves lower as investors buckled their safety belts for fear of rougher waves ahead. Already we’re seeing rate expectations out of the United States dwindle even further, as markets are now pricing in a 12% probability of a cut in rates by the Federal Reserve before the end of the year.

In response to the massive surge in the Japanese Yen, we heard the Finance Minister Taro Aso pledge readiness to intervene in markets in the effort of quelling Yen strength; and this helped to provide some support to USD/JPY after a quick drop below the psychological 100-level.

Risk Aversion Offset by Intervention Prospects in the Japanese Yen 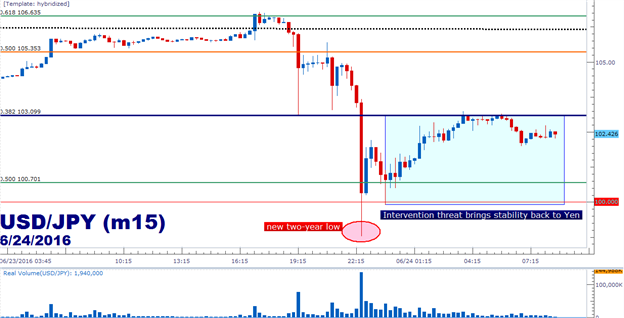 And as the Swiss Franc saw safe haven flows increasing, the Swiss National Bank intervened in the effort of stabilizing CHF. Mark Carney said that the Bank of England was ready to add £250 Billion into the Financial System to offset risk aversion emanating from Brexit, and the European Central Bank said that they are also standing by to add liquidity to markets if needed.

Another market that saw considerable capital flows in the realm of risk aversion was Gold, as prices ran up by as much as 8.6% overnight as news of the referendum filtered through markets. That move has moderated, and Gold is currently up 5.9% since yesterday’s 5pm ET close, and if we are, in fact, sitting in front of more Central Bank action, this is likely a market for traders to focus on. While the US Dollar and Japanese Yen may have to contend with intervention or ‘loose policy’ threats from Central Banks, Gold can continue to see capital flows as investors look to harness the risk of their portfolios. 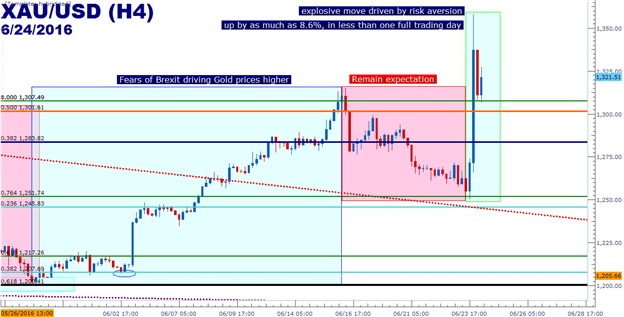