- The Brexit referendum continues to dominate headlines, and this will likely be the case until at least tomorrow when the results are expected to be delivered. This is a unique event, and traders should be extra careful with any exposure as we go into the referendum. Many banks are tightening-up risk, and many individual traders should as well.

- There is one massive problem with exposure around Brexit: Unquantifiable risk. The expectation is for extremely low liquidity as banks tighten up their risk, and this means that traders face even greater chances of gap risk against their positions. Traders looking to risk one-to-two percent could end up losing more if liquidity doesn’t exist to execute the stop at the desired rate.

- This could be prime-time to work on the approach. If you want to improve risk management, please read our Traits of Successful Traders. If you’re looking for a new indicator to add-in to the approach, check out our SSI indicator. And if you want something even shorter-term, check out our recently-unveiled GSI Indicator. I do not advise using these indicators (or any indicators) to trade Brexit.

By this time tomorrow, it’s widely expected that we’ll finally know of the results of the UK referendum on continued membership in the European Union. And while anticipation has been building for months, the tension has only increased as many polls are indicating very close splits between ‘in’ and ‘out’ camps.

Meanwhile, most betting houses have continued to favor the ‘remain’ side of the decision, and this view appears to have filtered in to many capital markets with traders bidding higher GBP-pairs along with global equity indices. It may sound strange to many Americans to place such reliance in bookies, but after correctly predicting last year’s general election and the 2014 Scottish Referendum, these sources have presented a case of accuracy that simply hasn’t been present in polling numbers. While this may seem like a ‘good’ thing that a positive outcome is being anticipated in markets, it’s important to remember that we still don’t know how this vote will pan out: Markets are driving based on expectations around bookies’ odds. Bookies adjust their odds based on betting flow, which is usually a far lower amount of capital than what we see in capital markets pushing price action. So, the fact that markets are driving so closely with betting odds presents the odd scenario of the tail (the smaller market) wagging the dog (the larger spot-FX market). Perhaps more dangerous is the fact that these traders ramping up long positions going into the vote could make matters more difficult after the Brexit decision.

And as confirmation of that fear, many banks are tightening up risk going into the referendum. We’ve already heard multiple warnings from banks in saying that liquidity will likely be far lower around the referendum due to the brutal uncertainty that markets are presented with. Another major bank this morning suspended stop-loss orders for that same fear of low-liquidity. My colleague Tyler Yell spoke about that risk at-length in his piece earlier this morning entitled, Adjusting Your Trading Expectations in Volatile and Possibly Illiquid Markets.

Coming into the morning of the referendum, the British Pound has just set a fresh 2016 high against the US Dollar. And this comes just one week after an aggressive down-trend found support just a bit above the 1.4000 psychological level, leading to a stark reversal saw the Pound rip higher by more than 5.7% against the Greenback in one week. So, the past two weeks leading into the referendum have already seen chaotic price action in GBP/USD as an aggressive down-trend was wiped away by an even more aggressive up-trend, and now traders are faced with the conundrum of the British Pound being at a fresh 2016 high as we go into one of the biggest event risk drivers in years. 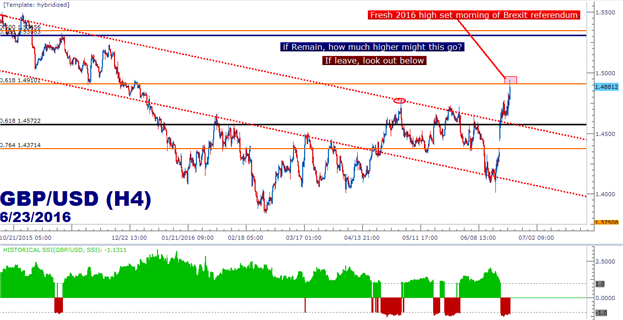 The fact that prices are driving-higher with so much aggression going into the referendum could make price action around this situation even messier. As in, if we do see a majority on the ‘remain’ side, how much higher might the Sterling actually drive? The UK wasn’t exactly in a strong growth position before the Brexit referendum began to dominate headlines, and we’ve already heard from multiple members on the Monetary Policy Committee of the Bank of England warn that the UK may need a rate cut after the ‘Brexit bounce’ should voters decide to stay in the EU. And it’s not as if that entire situation is going to magically turn-around should voters decide to stay in the EU.

And if we do see a vote to leave, markets would likely exhibit a tone of risk aversion with many global equity indices driving lower while the British Pound gets hit. Mark Carney had previously warned that a vote to leave would likely entail a ‘sharp repricing’ of the British Pound that could potentially bring in unsavory levels of inflation into the UK economy along with slower growth and higher unemployment.

Given the expectation for a low-liquidity environment, this outcome could see massive gap risk as there would likely be few liquidity providers looking to buy anywhere near current price action. This means stops can see massive gaps against the position before actually getting executed. Traders looking to risk one or two percent may end up losing 5-10% if liquidity doesn’t exist to execute that stop at the desired rate and has to instead be executed at a less favorable price.

And this brings up the main challenge of holding positions through the Brexit referendum: Traders can’t properly quantify the risk on either long or short positions. With a low-liquidity environment, it’s simply impossible to try to predict how deeply price action may run. All that we know is that there will likely be fewer orders to buy/sell in the market from institutions.

Stops can be gapped against by a wide margin, while limits have the challenge of finding an offsetting party. Given that most professional traders consider themselves risk managers first, this could mean that trading around Brexit simply isn’t worth the risk that one may have to take-on.