One of the best parts about price action is that it’s one of the cleanest ways possible of performing technical analysis. By trading without indicators, and evaluating price movements based on price alone, traders eliminate the risk of lag that is inherent in most technical indicators.

We discussed how traders can become more familiar with price action in the article, Four Simple Ways to Become a Better Price Action Trader.

We took this a step further in our most recent article on the topic with The Three Tenets of Price Action.

In this article, we’re going to focus exclusively on the entry into the trade or position.

The Value of Candlestick Wicks

A candle’s wick shows levels at which prices have reversed. Let’s look at a recent example in EURUSD. 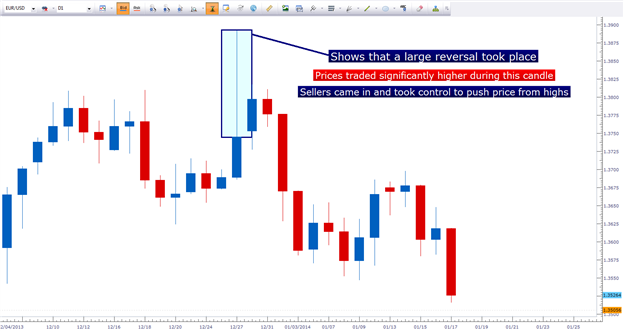 This reversal can be for any number of reasons: Perhaps a major technical level brought new sellers into the market? Or maybe a data announcement or event sparked a sharp reversal; the reason doesn’t matter nearly as much as the fact that the reversal happened… and price action can show this to the trader, and the trader can then build this into their approach.

Combining Wicks with Support and Resistance

Since wicks highlight reversals, traders can look to associate these areas on the chart with support or resistance levels to see areas that may prove beneficial. The support and/or resistance can be found in any number of ways, whether using Fibonacci, Psychological Round Numbers, Pivot Points, or even previous price action inflections themselves.

This serves as validation of that support or resistance level, as the very wick itself highlights the fact that traders had reacted during the formation of that candle, and pushed prices accordingly higher off of support or lower off of resistance.

Let’s look at an example to illustrate. 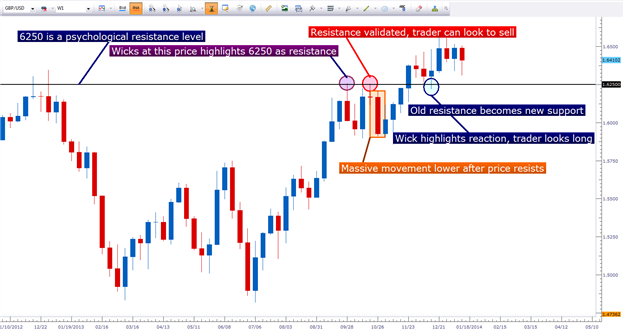 The price level of 1.6250 was a very interesting level on GBPUSD. This came in as a strong resistance level on the pair throughout 2012 and 2013. It’s also a psychological level that will often show up in the Forex market.

Notice (in purple) the first attempt to break above 6250 was rebuked. The wick touching this price shows that as soon as 6250 was hit, enough sellers came into the market to push prices lower.

Three candles later another attempt to break 6250 occurred, only this time the candle printed as a doji (highlighted in the red circle above).

Notice that the following candle is a large down day, until eventually support comes in.

Eventually 1.6250 yields to the bullishness in the pair, but shortly thereafter the old level of resistance at 6250 becomes a new level of support; once again highlighted by a candlestick wick (highlighted in blue).

The trader can look to trade this setup long, with a stop below the bottom of the wick so that if the momentum that created that wick at support continues, the trader can be looking at a profitable position.