What’s driving precious metals besides "fat fingers"? Find out in our market forecasts.

Yesterday, gold was rocked by nearly $18 in a minute on a “fat finger” order, or an order which was erroneously larger than intended. So, they say. You look around and no one really knows exactly what caused it, and we’re not really sure it matters all that much. What matters on this end is that it took the price of gold right down to the 200-day MA almost to the tick before snapping back. The low very nearly came at trend-line extending back to January, as well. These spike-lows, regardless of what caused them, are important events, even if the influence is only short-term in nature. With that in mind, look for gold to hold the confluence of the 200-day and January trend-line.

But where can gold go from here if support holds? It won’t be long before the 1260s come into play with a little strength. It very nearly traded there prior to yesterday’s drop. It’s an area of interest which has been in play since February. For gold to really gain traction, as we’ve discussed before, it needs a strong weekly close above the 2011 trend-line before we can start getting serious about longs. Until then gold could flounder around. 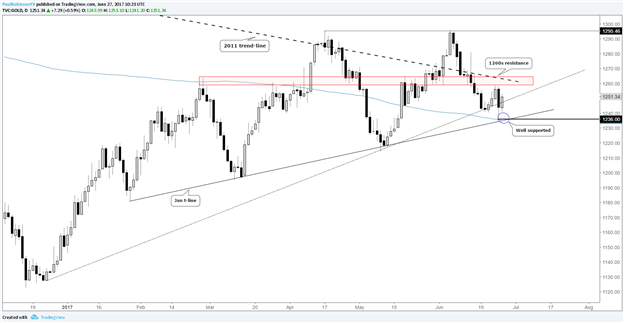 Moving on to silver.

It was pushed down into a pair of trend-lines extending higher from December of both 2015 and 2016 before reversing most of its losses. The reversal-day at support skews the bias upward for now as long as yesterday’s low holds. We might see a retest of the reversal-day event, but a turn higher following a retest could offer traders an attractive opportunity to enter for a rebound. Keep an eye on gold, though, should it start pushing into the 1260s. With silver not having the cleanest top-side levels to operate off of we’re looking to gold for cues. The next real point of interest from a resistance standpoint in silver, is the trend-line running down off the April high, but it seems unlikely to reach that high if gold struggles to overcome the 1260s. 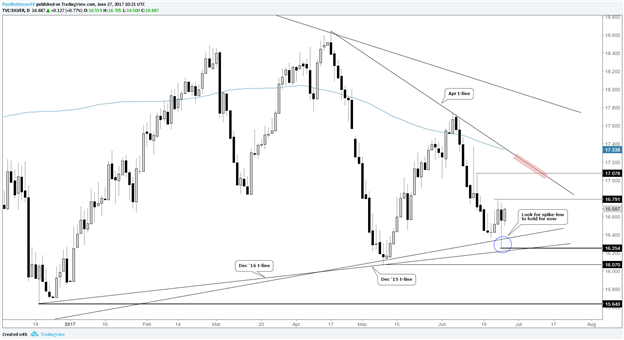