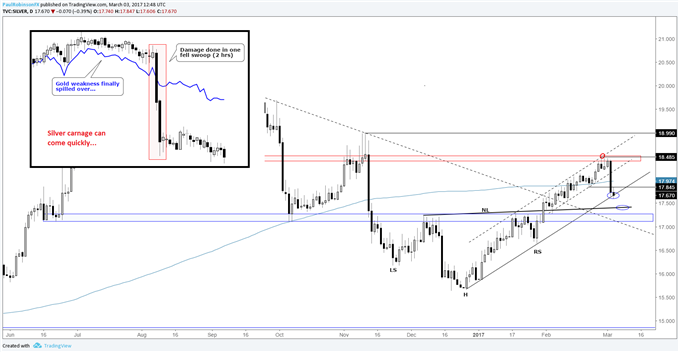 Silver prices took a beating yesterday, dropping by about 3.5% once the dust settled. The other day we took a look at gold and made note of several technical events in confluence, which if broken would lead to a drop. Gold had been declining for several days while silver held a bid up against resistance, but finally sellers showed up in both metals. It only took about two hours to do the majority of yesterday’s damage – that’s silver for you, ferocious with little warning.

Silver easily sliced through the month-long channel we were using as a guide higher; it’s now trading at the lower side of the broader channel dating back to the December low. It seems likely with gold looking lower, it won’t be long before silver takes out the bottom-side trend-line; especially given yesterday’s sharp break. Momentum begets more momentum. Should support hold, it will require some work to turn the picture bullish again – damage has been done.

On further weakness, look to the neckline of the inverse H&S formation silver broke higher from last month (~17.40). Just on the underside of there lies a very important support zone down to ~17. Also around 17 lies the trend-line running down from the July high. In the short-term, resistance comes in at today’s current high (17.84) which was created on a turn lower from the 2/21 low.