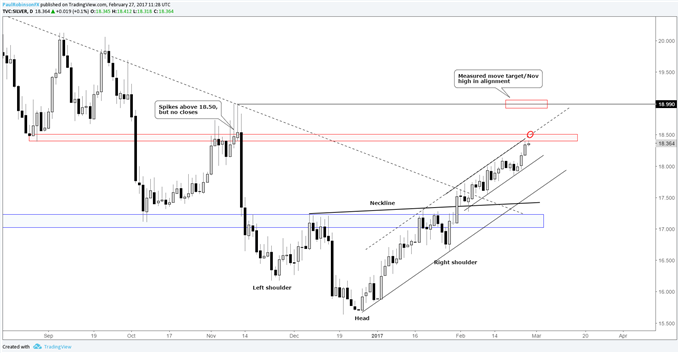 Last week, we looked beyond just the price action in silver to seek further clarity on where it was headed. While silver was continuing to channel its way higher, gold was coiling up into a triangle; one which has since resolved upward and along with it silver pushed into a key area of resistance. The area surrounding 18.50 has been high on our radar for a while now; to be more precise the very bottom of resistance clocks in at 18.40, right about where it’s trading now. The general zone around 18.50 comes by way of the swing low created in August, which set the tone later on in November. Prior to the U.S. presidential election several attempts to close above the August level were rejected, with daily closes falling just above or beneath the 18.50 mark.

The 18.50 mark also roughly coincides with the upper parallel of the trend-line running higher from the head of the bottoming inverse H&S formation. It’s only minor in significance, though, but could be problematic in the very near-term with larger resistance also at hand. A rise above all resistance and it seems likely we will see a quick shot to 19, the measured move target for the inverse H&S as well as the November spike highs. At that juncture, we would reassess the situation, especially given that heading into this week silver has been up nine consecutive weeks. A drop from here below the month-long lower parallel would be reason to put the brakes on longs and look for a larger decline to unfold towards the December trend-line.