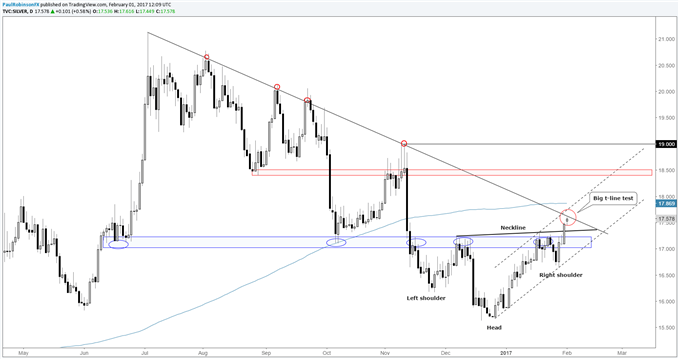 In last week’s post, we made note of the uptrend dating back to December running into major resistance over the 17 mark. At first, silver prices turned lower, but have come back in recent sessions; the process of dipping and ripping put in the ‘right shoulder’ of an inverse 'head-and-shoulders' pattern, and also triggered the ‘neckline’ as well. It was a quick development on the right side, but nevertheless there is decent symmetry to the two-month long formation.

Crossing over the barrier in the low-17s and breaking the neckline of a bullish H&S formation is a good start for an extended rally. However, before we become overly ‘bulled up’, silver needs to break above the downtrend line in place since the July spike high. There are a good number of inflection points along this line of resistance, adding even more importance. If silver can’t overtake this trend-line, then optimism will be kept at bay. A break above, though, would appear to open up a fairly clean path for a move higher towards 18.50/19.

Should we see a breakout above the trend-line, keep an eye on the upper parallel belonging to the trend-line off the December lows, the 200-day at 17.87, ~18.50, then the November peak at 19. The measured move target, based on the depth of the H&S pattern, points to a move of about 1.60, or close to 19 (aligns nicely with resistance).

A turn lower will bring the 17.00/32 zone into play as near-term support, followed by the December trend-line.

If silver is to rip, it will likely to be accompanied by an aggressive decline in the US Dollar. The US Dollar Index (DXY) is below the 2015 peaks it broke above following the U.S. election, and is at risk of seeing an increase in selling pressure as it drips further below the 100 mark. (We delved into this a bit last week.)

Heads up: Later today, at 19:00 GMT the FOMC will announce its decision on rates and provide a policy statement. There are no expectations for any changes to be made, so the market will be focused on the language in the statement. Expect heightened volatility.

See our Webinar Calendar for a schedule of upcoming live events with DailyFX analysts.