- USD/CHF has been one of the cleaner trends of US Dollar weakness, and that move continued this week as USD/CHF sank to fresh two-year lows.

- The bearish move in USD/CHF is stretched, and so far on the day we’re seeing a bit of near-term resistance develop at that prior two-year low around .9257. Traders should be very careful of looking at short-side continuation strategy on a Friday ahead of an extended holiday weekend out of the United States. We look at a couple of deeper resistance levels below that could be usable for next week.

The US Dollar has been in a strong trend of weakness for well-over a year now, and that trend got another push-lower this week around the release of US Inflation numbers for the month of January. As we’ve been discussing, while USD-weakness has shown quite visibly in most major currency pairs, few have offered the level of consistency that’s been visible in USD/CHF.

USD/CHF ran into a key area of support in early-February when traders showed up to lift prices off of the prior two-year low. This low was set at .9257, and price action last traded here on the morning of August 24th, 2015; aka, China’s ‘Black Monday’. But when prices made an attempt to take out those lows earlier in the month, bears were rebuffed after bulls came-in at support to push prices higher. This bullish push saw USD/CHF trade as high as .9470, and that’s when the sellers began to come-back into the pair. Collectively, this bullish push had produced an up-ward sloping channel, which when combined with the prior bearish trend, gives us a bear flag formation that began to break earlier this week. 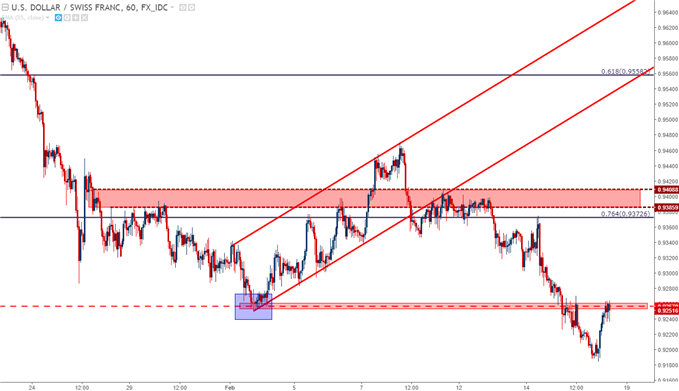 As you can see from the above chart, that prior area of support around the previous two-year lows of .9257 are helping to set near-term resistance. This may not hold for long, so for those looking at bearish continuation strategies, a deeper retracement would make the prospect of continuation look a bit more attractive, while also affording the opportunity to work with a better risk-reward ratio. On the below chart, we’re looking at two levels of interest taken from prior price action, each of which could open the door for bearish continuation should short-term resistance begin to show. If prices are unable to maintain below this week’s high of .9402, the near-term short stance should take a back seat to wait for a better level or method of entry. 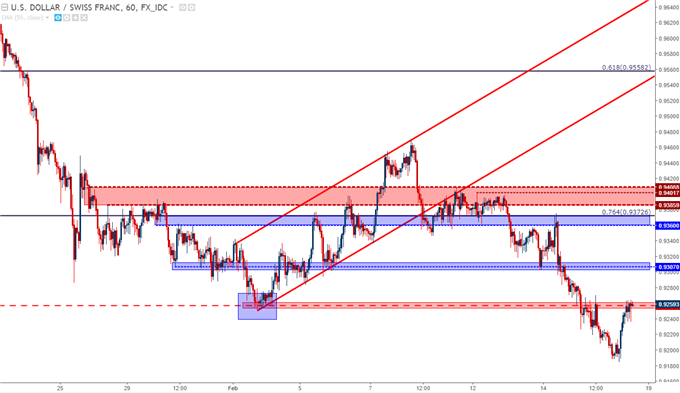