- USD/CHF recovered after a test of two-year lows in early-February.

- Price action built into a bullish channel after those lows, creating a bear flag formation.

Last week finally saw some element of respite in the bigger-picture bearish theme around the US Dollar. As the Greenback fell down to fresh three year-lows two weeks ago, USD/CHF ran into its own two-year low at .9257. In what was one of the cleaner USD-trends as we opened last week, a retracement developed after bears were unable to take-out .9257. This was the low that was set around China’s Black Monday in August of 2015, when a bout of risk aversion swept the world. 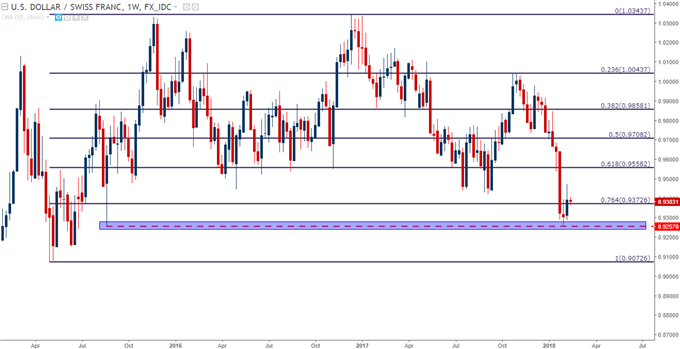 Prices in USD/CHF ran-higher after Non-Farm Payrolls, and that strength continued through the first half of last week. But while that move was coming-in, a bullish channel had formed at the bottom of a bearish trend, giving us a bear flag formation to work with on shorter-term USD/CHF charts. 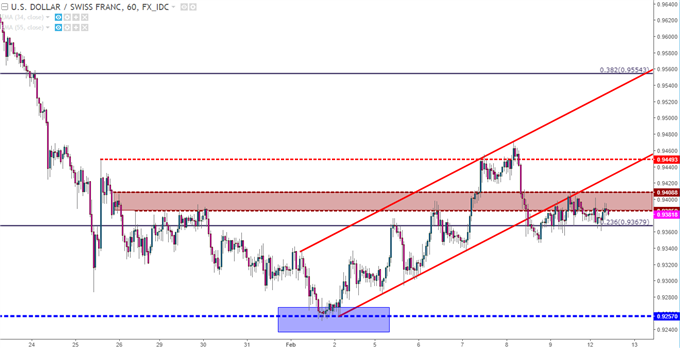 On Thursday of last week, a quick bout of Dollar-weakness showed-up around the Bank of England’s Super Thursday. This created quick dips in EUR/USD and GBP/USD which, by and large, have continued as each of those bullish trends have seen deeper retracements. But one area that USD-strength did not continue showing was USD/CHF, as the pair broke-below that bullish channel, after which resistance started to show in the zone that we were looking at last week. This runs from the approximate .9386-.9409; taken from a group of prior swing-highs from January price action.

Near-term support appears to be coming-in from the 23.6% Fibonacci retracement of the May, 2015-December, 2016 major move; and for those looking at taking a more conservative stance towards bearish continuation in the pair, awaiting a down-side break of this level could make continuation prospects look a bit more attractive.

But for those looking for short-side USD plays, the setup in USD/CHF will likely remain as attractive in the near-term, and for those looking to implement the setup with current levels, stops can be investigated above last week’s swing-high of .9370, with targets cast towards .9300 and then.9250 on the way to fresh two-year lows in the pair. 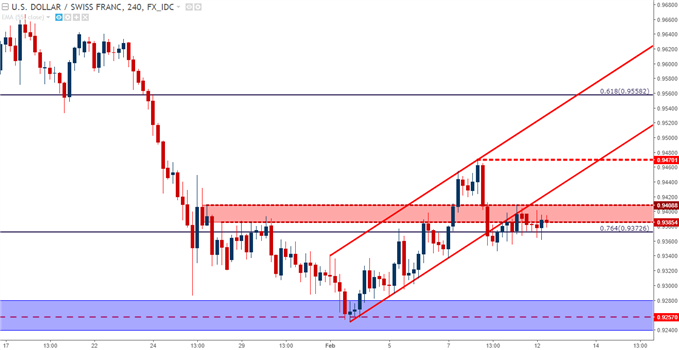