Throughout September, the Canadian Dollar had decoupled from its most significant driver, energy. With Canadian federal elections weighing on price action – and sidelining the Bank of Canada – the Loonie was unable to take advantage of an otherwise bullish environment defined by surging oil prices. But now that October has arrived, and Canadian federal elections have passed, the Canadian Dollar is able to track more closely energy prices – and the BOC may be given leeway to resume its policy normalization efforts. 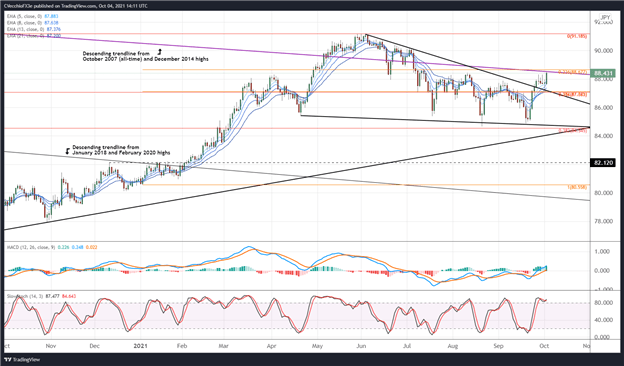 It appears that a bullish falling wedge has formed over the past six months, with resistance measured against the June and July 2021 swing highs, and support measured against the April and July 2021 lows. Price action over the past week saw CAD/JPY rates retest wedge resistance (now support) after the bullish breakout initiation, suggesting that a run above the descending trendline from the October 2007 (all-time high) and December 2014 highs is in its early stages.

Momentum is turning increasingly bullish on the daily timeframe. CAD/JPY rates are rallying above their daily 5-, 8-, 13-, and 21-EMA envelope, which is in bullish sequential order. Daily MACD’s advance has now cleared its signal line, while daily Slow Stochastics are holding in overbought territory. A move above the 23.6% Fibonacci retracement of the 2021 low/high range at 88.68 would suggest gains towards the yearly high (91.19) is due this October. 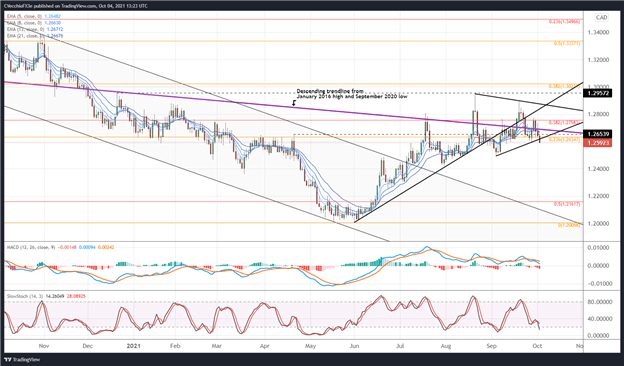 USD/CAD rates have been trading sideways for several weeks, but may finally be seeing a directional breakout. The pair is exiting its symmetrical triangle to the downside while below descending trendline from the January 2016 high and September 2020 low.

Momentum is becoming increasingly bearish as the breakout gathers pace. USD/CAD rates are below their daily EMA envelope, which is quickly aligning in bearish sequential order. Daily MACD continues to decline, even though it is not below its signal line, but daily Slow Stochastics have already slipped back into oversold territory. 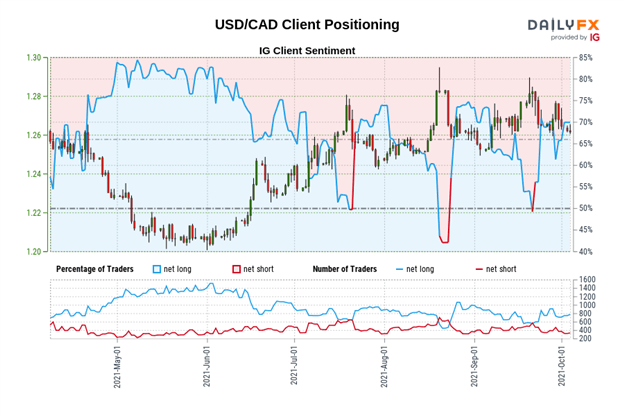