In the wake of the Federal Reserve June policy meeting, we noted that “the Canadian Dollar is testing significant levels of support (support in CAD/JPY, resistance in USD/CAD) that suggests an inflection point is nearby: either the Loonie will regain technical posture from this point forward; or a more significant technical breakdown could be afoot.”

It appears that the former path is being taken; the Canadian Dollar has started to regain its technical posture in recent days as evidenced by reversals in the two major crosses, CAD/JPY and USD/CAD rates.

Having returned back into the descending channel dating back to November 2020, USD/CAD rates may have experienced a failed bullish breakout; typically, return to consolidations see a return to the other side of the consolidation.

Meanwhile, CAD/JPY rates have been able to maintain their uptrend from the February and April 2021 lows, and have also moved back above the descending trendline from the October 2007 and December 2014 highs. 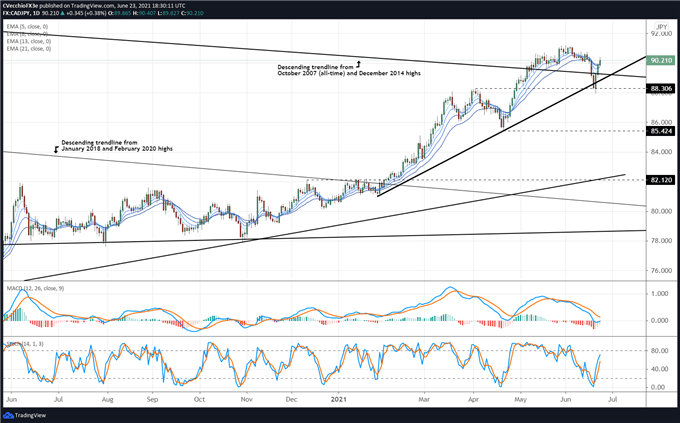 In the prior update, it was noted that “CAD/JPY rates are testing the aforementioned descending trendline; failure below this level would suggest the recent effort higher was a false bullish breakout attempt…but that wouldn’t necessarily indicate that potential for more gains are out the window. Should CAD/JPY rates lose trendline support, a pullback towards the March high at 88.31 – which coincides with the rising trendline from the January and April swing lows – could develop before price action settles prior to attempting another drive higher.”

CAD/JPY rates indeed dropped to 88.31 before finding support, but have since then used the former March high as well as the uptrend from the February and April 2021 swing lows as a springboard. CAD/JPY rates are also trading higher through the descending trendline from the October 2007 (all-time high) and December 2014 highs, again, suggesting that a multi-year bottoming effort is back on track. 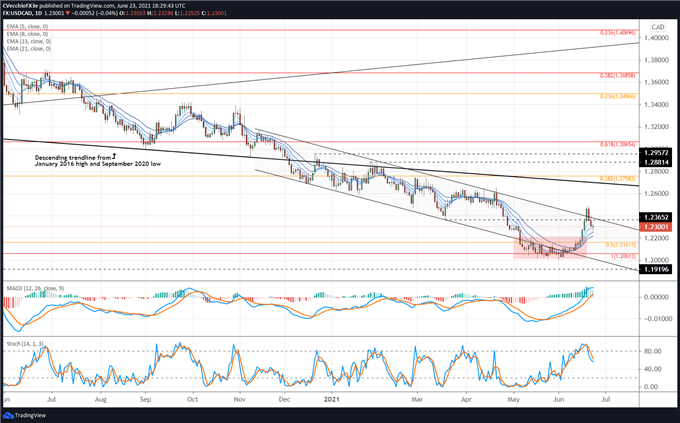 Last Thursday it was noted that “the equidistant measured move of the range suggested USD/CAD could rally towards 1.2370; the high came in today at 1.2374. Coupled with resistance in the descending channel in place since November 2020 coming in play between 1.2350 and 1.2400 for the remainder of June, there is nascent technical evidence that the USD/CAD rally may be capped from here.”

Since then, USD/CAD rates have fallen back below the former March low at 1.2365, returning back into the descending channel that has guided price action for the past eight months. USD/CAD rates are holding around 1.2300, caught up in the middle of its daily EMA envelope (which remains in bullish sequential order). If the combination of retreating Fed rate hike expectations (if only minorly) and ongoing gains in oil prices continues, USD/CAD rates may soon find themselves pressured more to the downside. 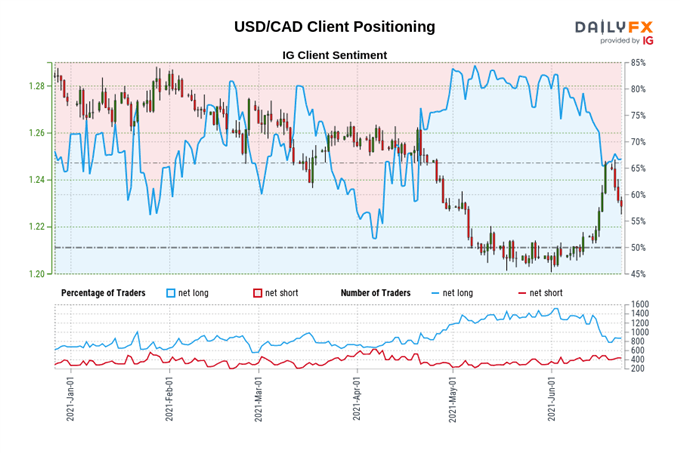