Toothpaste Back in the Tube

It's been a week since the Federal Reserve's June policy meeting, but it seems that policymakers are working to put the proverbial toothpaste back in the tube. Fed Chair Jerome Powell spoke yesterday at a US Congressional testimony, and the commentary that he issued suggested that there was a tone of ‘lower for longer’ underlying last week's FOMC meeting.

Are the Fed’s efforts to control the narrative working? We can measure whether a rate hike is being priced-in using Eurodollar contracts by examining the difference in borrowing costs for commercial banks over a specific time horizon in the future. Chart 1 below showcases the difference in borrowing costs – the spread – for the July 2021 and December 2023 contracts, in order to gauge where interest rates are headed in the interim period between July 2021 and December 2023. 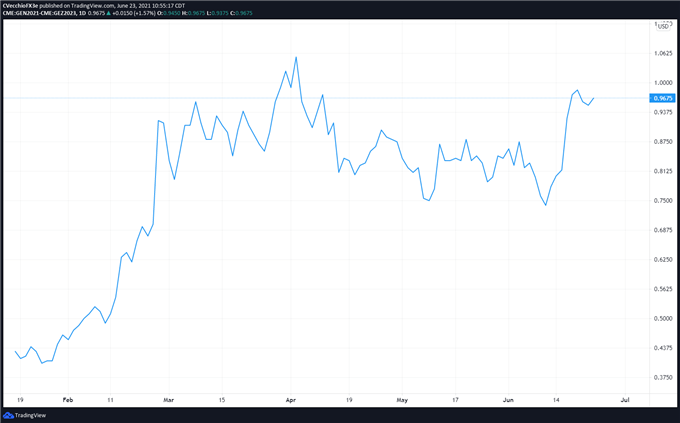 Relative to last week, we can see that markets have taken a less hawkish interpretation of the Federal Reserve’s June meeting, thanks in part to wave after wave of policymakers hitting the news wire this week (16 in total). Based on the Eurodollar contract spreads, there are now less than 100-bps worth of rate hikes discounted by December 2023; 96-bps in all which is down from the peak at 106-bps post-Fed.

Indeed, it would seem that the Fed policymakers are doing a decent job at damage control.

The economic calendar for the next 48-hours is both busy and quiet. It’s busy in the sense that we have a Bank of England rate decision on Thursday as well as another US inflation report due out on Friday. Despite the smattering of high rated event risk, it appears that markets are poised to remain quiet.

None of the high rated events seem to stand out in context of the onslaught of Federal Reserve speakers, who have been hammering markets with commentary this week to control the narrative. It remains the case that with each passing Fed speaker over the next few days, those remarks will carry more import than any day to release through the end of the week.