The Canadian Dollar has seen gains accumulate in recent weeks, in particular versus the slew of lower yielding safe haven currencies amid a tide of rising risk appetite. Spurred by much better than expected Canadian economic data, including the recent November Canadian jobs report which tripled job growth expectations, USD/CAD rates have broken down to fresh multi-year lows while CAD/JPY rates have jumped to test critical resistance – the final hurdles on the way to a bullish breakout of their own.

The December Bank of Canada rate decision concluding on Wednesday, December 9 may not prove to be an impediment to further Canadian Dollar strength. The BOC has been maintaining its emergency low interest rate regime since the start of the coronavirus pandemic, and amid building economic momentum, it appears unlikely that policymakers will be acting again anytime soon. In turn, the BOC doesn’t necessarily have the ability to stand in the way of further Canadian Dollar strength.

BOC Staying on Hold for Some Time

In recent weeks, BOC Governor Tiff Macklem has been quite forceful in his commentary to reassure financial markets, noting that “if you are a household considering making a major purchase, if you’re a business considering investing, you can be confident that interest rates will be low for a long time.” In other words, the BOC appear poised to keep its low interest rate regime in place for the foreseeable future. 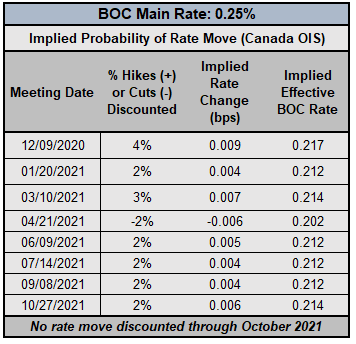 As such, interest rate expectations are non-existent around the clear forward guidance offered by BOC Governor Macklem. Just two months, in mid-October, there was a 17% chance of a 25-bps rate cut by December 2020. Now, there is a 4% chance for December 2020. No month carries an expectation in excess of 5% through October 2021. 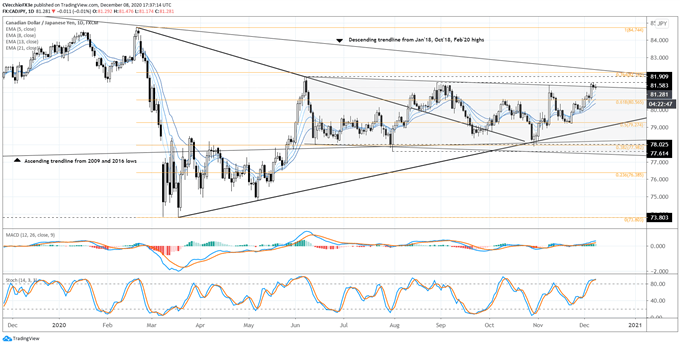 Poking through the downtrend from the June, August, and November highs is important, but what will be more important for CAD/JPY rates is if the pair is able to close through some of these recent swing highs; breaking the series of lower lows will be a signal that the consolidative downtrend, however slight, has given way to a new regime of bullish trading. Clearing 81.58 and 81.91 would be strong indications that CAD/JPY rates were embarking on an earnest bullish breakout attempt.

CAD/JPY rates retain bullish momentum, even as they have stalled near the November swing high at 81.58. Daily Slow Stochastics are trending higher while in overbought territory, while daily MACD continues to trend higher above its signal line; in tandem, these are signs of a bullish market trending strongly. Furthermore, with CAD/JPY rates above their daily 5-, 8-, 13-, and 21-EMA envelope, which is in bullish sequential order, the path of least resistance appears to be higher. 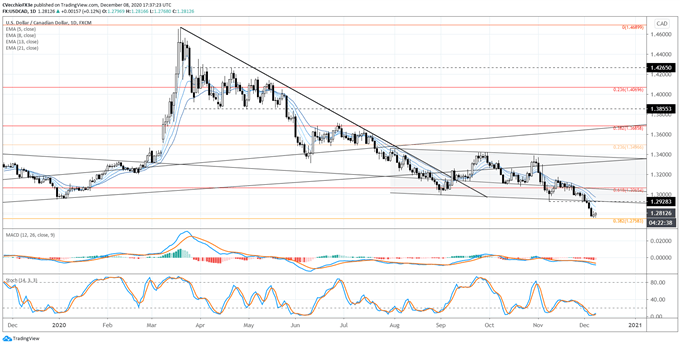 It’s been less than 24-hours since we last updated the USD/CAD rate chart, and as a trader whose personality alters between swing trading and position trading, my perspective has not changed materially. Presented unaltered:

“In our last update it was noted that, ‘Now that the fresh yearly lows have emerged, USD/CAD rates may be biased to continue lower towards a longer-term Fibonacci retracement: the 38.2% retracement from the 2012 low to 2016 high at 1.2758.’Since the prior update, USD/CAD rates fell as low as 1.2770 before rallying at the start of this week.

“USD/CAD rates continue to trade below their daily 5, 8-, 13-, and 21-EMA envelope, which is in bearish sequential order. Daily MACD is trending below its signal line (and gaining pace), while Slow Stochastics are holding firmly in oversold territory. The path of least resistance is lower for USD/CAD rates, at least until the daily EMA envelope is broken (USD/CAD rates close above the daily 21-EMA). A near-term bounce higher won’t negate the significant technical damage done in recent weeks.” 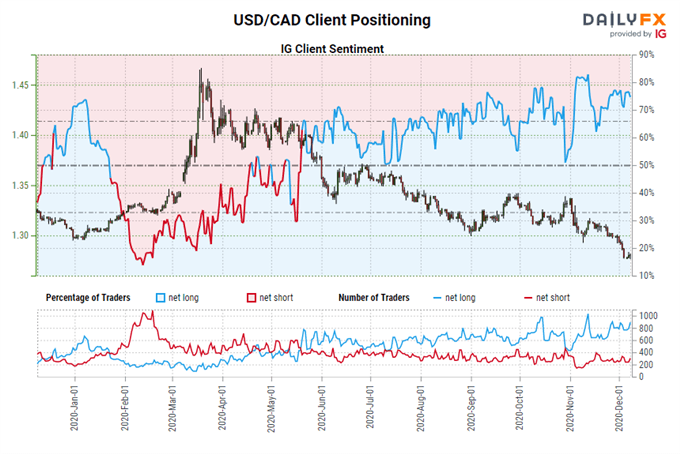