The Dollar Index is the simplified approach to judging the strength of the world’s reserve currency. However, looking simply at the DXY to analyze USD strength would be a short-sighted given the recent dynamics in the market. Over the last week we’ve seen the USD swing into strength most notably against currency pairs that do not make up large weights in the DXY.

The DXY is weighted heavily in favor of Euro (57.6%), followed by Japanese Yen (13.6%), British Pound (11.9%), Canadian Dollar (9.1%), Swedish Krona (4.2%), and Swiss Franc (3.6%). The most dominant strength in March has been seen in a handful of these components of DXY, such as the Canadian Dollar. The real strength can be seen in other commodity currencies, hence the drop in Oil like the Australian and New Zealand Dollar, Norwegian Krone, and a handful of Emerging Market Currencies.

This week, a strong bump at the front-end of the UST yield curve, notably 2’s has aligned with the view that the Fed has the engine started and the gas tank filled in anticipation of a long cycle of hiking rates toward normalization. Friday’s Non-Farm Payroll is only expected to add to the conviction of multiple rate hikes to come starting with one at the March 15 FOMC. The stronger USD may continue to build pressure against commodities linked to the price of Oil, which recently settled below $50/bbl for the first time in 2017.

Doubts to the Bullish Picture crepped into view over the prior month, but we gave preference to the uptrend continuing over a strong reversal. Now, add this instance to another in the pile of trends that continue instead of reverse despite fundamental signs of a reversal waning.

The uptrend has been solidified when looking at intermarket signals such as treasury yields pushing higher or the breakdown in the commodity sector. Price action still seems to be struggling near the 61.8% (102.07) retracement of the 2017 range, but a the background seems to favor an eventual push higher toward the 78.6% retracement at 102.84.

Most strategists are favoring an eventual push through the January high of 103.82, but as noted earlier, the extreme weighting of the EUR means that we likely need to see a breakdown in the EUR for this to take shape. Given the French election in a few months, we could see such an environment develop. The 1M 25-delta risk reversal for EURUSD shows a premium being paid for out of the money puts relative to calls, which means they’re paying to protect downside risk. This does not make the downside a foregone conclusion, but rather a possibility that some see likely enough to pay to protect themselves against the event risk. 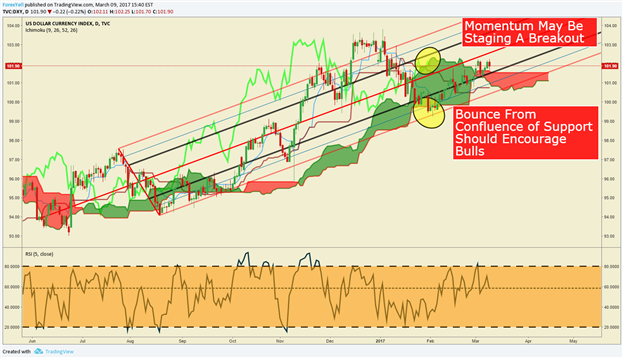