USD has done an impressive pivot from worst to first in G10FX. While the economic data has begun to disappoint relative to expectations in the last few weeks, make no mistake that the story in the US Yield Differential seems to show that momentum could continue to push USD higher against weaker currencies like the Canadian Dollar or New Zealand Dollar.

This week, we’ve seen on the back of multiple Fed speakers the probability of a March Fed Hike surge from below 50% to ~90%. This has aligned cleanly with USD strength.

This week has seen impressive moves in favor of the USD against the British Pound, which looks like it could move back below 1.20 if we break 1.22. Additionally, USD/CAD is sitting at its highest level since the first week of trading in 2017 with a price move above 1.3400. Currently, support for USD/CAD sits near 1.325. Two other impressive moves have been registered by EUR/USD, which recently punched below 1.05 and USD/JPY that may soon make a move toward 116 if the price can close above the 55-DMA at 114.67. However, it’s difficult to get too excited below 114.96, which was the mid-February high, and could be Triangle Pattern Resistance. 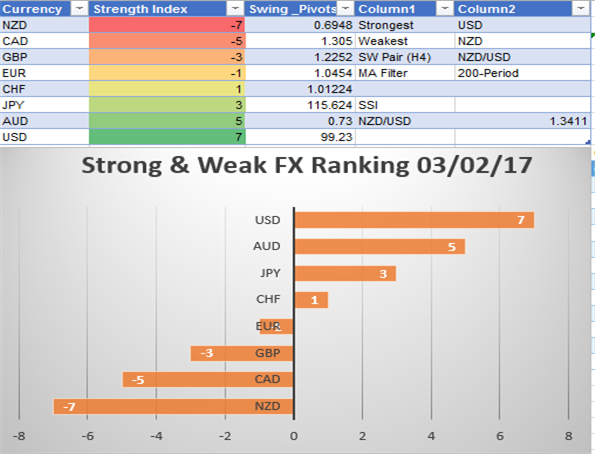 Looking specifically at DXY, it’s fair to say that the price aligned incredible well with the indicators we’ve been watching to keep us in tuned to the overall trend. Those indicators are the Ichimoku Cloud and Andrew’s Pitchfork that was drawn off the momentum spike close in the summer.

The price has moved above the Ichimoku Cloud in recent days, which could mean we’re about to see an environment of similar Bullish momentum as we saw in Q4 2016. The correction from early January to the pin-bar low in February was ~61.8% of the time of the rally after Trump was elected and the sovereign bond market sold off in anticipation of a more Hawkish Fed.

This week confirmed that view and the price acted in kind. The risk for DXY traders appears to favor a USD-positive rise given the confluence of surprises surrounding USD. To get a broader sense of where the USD goes from here, I’ll be watching equities and EM currencies as further appreciation there may limit DXY upside. On the other hand, an aggressive breakout in the DXY could limit further upside in equities (a top no one is comfortable calling and looks ripe for a Q1 2000 Blow-off scenario), as well as commodity and EM FX. 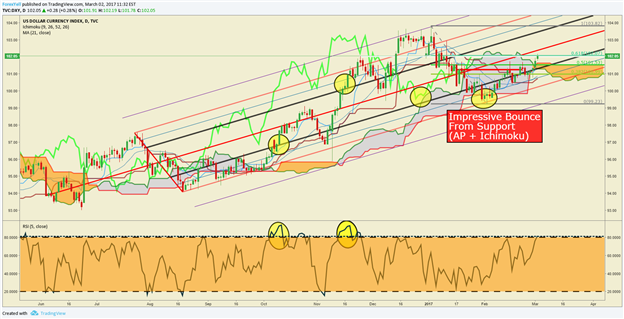