The Canadian Dollar is opening the month as the weakest currency in G8FX when compared against 28 pairs on a 4-hour chart with a 200-period moving average applied. Consequently, the USD has moved up the ranks aggressively in the last week as pricing in of a Federal Reserve Rate hike later this month has surged from a ~33% probability a week ago, to over 85% on Wednesday.

The Bank of Canada seemed to provide fuel for USD/CAD bulls with the statement that core inflation measures “continue to point to material excess capacity in the economy.” The statement combined with USD strength to stretch the 2-year differentials to their widest in 3-months. Betting against a pair that is showing the steepest yield differential in a quarter is a bet against momentum, which can be painful when wrong.

Sticking to the tenet of not fighting strength, nor buying weakness, we’ll look for the topside to continue in USD/CAD even if USD shows some exhaustion after the strong run higher at the start of the week. Many traders are keeping an eye on the 1.3350/80 zone as a price level to watch. A close above this zone could mean that we’re soon to move to the top half of the channel toward 1.36/38. The additional Fundamental risk for the pair is Canadian GDP on Thursday followed by key Fed speaker’s Yellen & VP Fischer on Friday.

The chart below shows a channel drawn off the two key low prices on the corrective move that began in May and copying the line to the first high in late May. Given the Canadian Dollar’s status as the weakest G8 currency, it’s hard to favor a move below support, but we’ll continue to watch the Trendline that is drawn by connecting the May low with the late-January low of 1.2986.

Wednesday’s price action has also taken USD/CAD above the Ichimoku Cloud on the Daily Chart. The sharp move higher this week could see a late-week pull-back, but a move higher beyond 1.3400 should convince traders that the weak CAD could soon become weaker without threats of a Hawkish BoC or Oil market breakout. 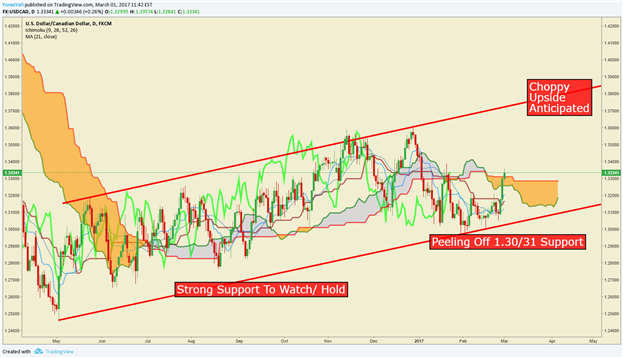